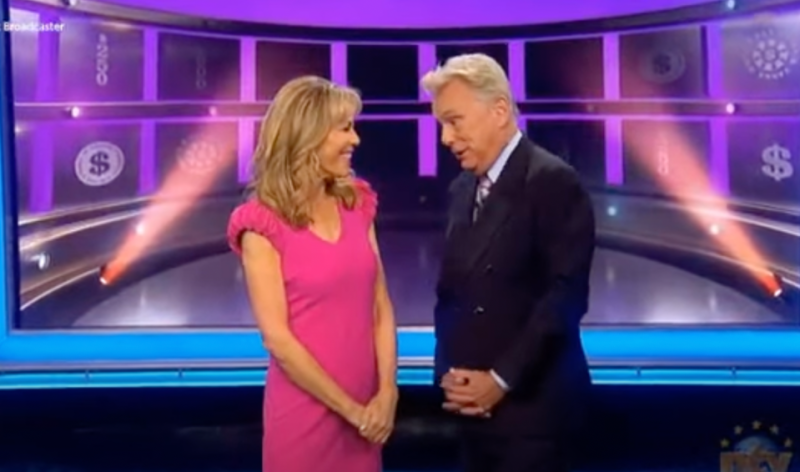 WHEEL of Fortune fans who didn’t reach for their remotes were in for an arguably shocking closing moment on Wednesday‘s episode.

Pat Sajak, 76, made Vanna White, 65, visibly uncomfortable as the credits rolled by joking she was once “in prison.”

ABCPat Sajak went off-script and joked: ‘We’ve been through a lot in 40 years.’[/caption]

The Wheel of Fortune episode’s bonus puzzle was looking for “Baffling Mystery.”

Although contestant Alisha with $12K was the one to take a spin at it, she couldn’t solve it, missing out on a Ford car.

The show cut to a commercial and when it returned, Pat wound up saying something baffling himself.

He turned to Vanna who stood next to him in a chic pink dress.

‘I USED TO VISIT YOU IN PRISON’

“Are there any mysteries we should know about you?” Vanna prompted.

“There are no mysteries about me, though I am baffling,” Pat joked.

“As you know, from our years together.”

Vanna laughed and Pat added: “We’ve been through a lot in 40 years.

Remember I used to visit you in prison?”

The crowd roared in such a wave of astonishment that it was louder than they were.

“I don’t remember that,” Vanna nervously replied taking a step away from Pat.

“Was that you?” Pat added. “Well you were – you had other problems at the time.”

The crowd again scoffed quite loudly and it added an extra effect to the whole off-color riff.

“We’ll see you next time for another walk down memory lane!” Pat closed.

‘LEAVE THE JOKES TO THE WRITERS’

“Pat Sajak’s one-line joke near the end. LOL” one fan wrote to YouTube.

“Pat, leave the joke writing to the writers that attempt at humor there at the end was just plain stupid,” tweeted another.

ABCHe continued about Vanna White: ‘you had other problems at the time’ – she had to tell the stunned crowd ‘He’s joking!’[/caption]