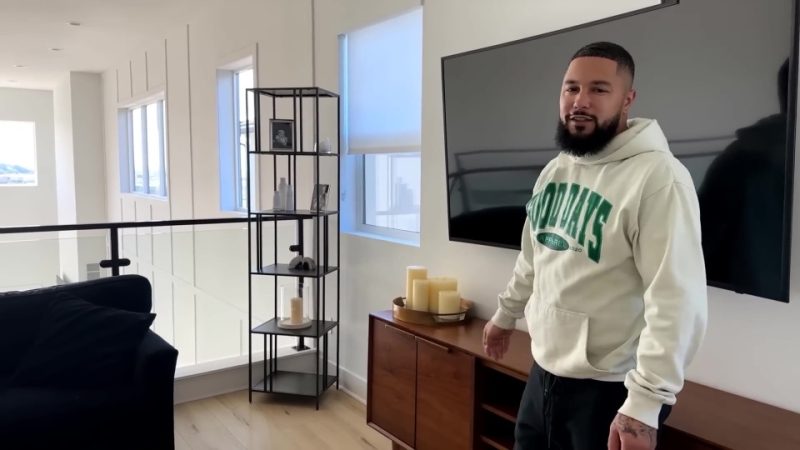 TEEN Mom fans have bashed Cheyenne Floyd and Zach Davis after spotting a scary detail inside their $2M home.

The couple shared a new video to their YouTube channel giving fans a glimpse inside their palatial pad.

Instagram/@cheynotshyThe couple moved into their mansion in 2021[/caption]

Cheyenne, 30, and Zach took to YouTube to share what they called an “updated house tour,” telling fans that the first time they did one their house wasn’t done and several changes hadn’t yet been made.

They kicked off the tour in their entryway, showing off a simple black table with tiny white ottomans underneath them.

The MTV stars walked around various spaces in the home, including a guest room/office, a bathroom, another guest room, an unfinished mud room, and several other spaces before getting to their upstairs.

Once there, they showed off another living room-type space with a large sectional sofa, a TV, and other pieces of furniture.

Pointing to the sectional, Zach explained: “Then we have an old piece of 51st right here.”

He went on to say: “We are getting rid of it because this right here is too dangerous for the kids and the dogs. We’re not trying to risk somebody going overboard. Yeah, I’m not trying to deal with it. All this is gonna go.”

Instead, he said, they plan to “do a massive pool table” in the space.

Fans were quick to note that the couch was up against a banister, which some seemed to think may be dangerous given the fact that Cheyenne and Zach have two young children in their home.

One commenter wrote: “Beautiful home. I do agree that the upstairs sofa is dangerous for the kids and the dog has to go.”

The closet was filled with Nike and Vans shoes, as well as designer clothes that still had the price tags attached.

The couple also captured the kitchen, which included custom windows, high-end appliances, and a lighting fixture that Zach chose for the space.

Cheyenne recently showed off the guest room in her mansion, calling it one of her “favorite” spaces in the home.

While the room was less spacious than the rest of the home, the Teen Mom OG star dressed it up with artwork and other trinkets.

Numerous figurines, candles, books, and lamps were positioned on the dresser and end tables, while a large circular mirror and paintings hung on the walls.

She also incorporated decorative pillows, which stood out on top of the white bedding.

Cheyenne captioned the post: Our guest room has become my favorite room in the house. Bed frame, lamps and books all from @hautehomela.”

However, fans weren’t impressed with the TV star’s design skills and criticized her all-gray and tan color scheme.

One person commented on the lack of color, writing:
“It’s really plain.”

Another suggested: “Needs a little pop of color.”

A third remarked: “I like it but in a way it reminds me of a retirement home lol.”

While others called the Teen Mom star’s choice of neutral colors “boring.”

InstagramCheyenne also showed off a guest room, which she said was a ‘favorite’ space of hers[/caption]

InstagramFans have repeatedly slammed their home as boring, among other things[/caption]