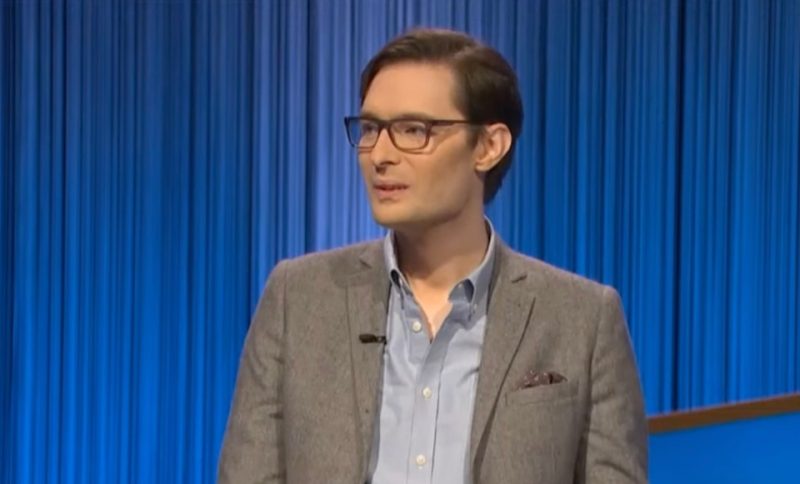 JEOPARDY! champion Troy Meyer won his 5th game on Wednesday with a cool combined $170K after getting a serious run for his money.

Host Ken Jennings, 48, admitted that the rising star gave viewers “a scare” as it was nearly game over in the final round.

Jeopardy!Troy Meyer’s 5th win had fans “on the edge of their seats”[/caption]

Troy is a music executive from Tampa, Florida, who has Jeopardy! fans buzzing since the gracious game show wiz just keeps on winning.

All four of his previous victories were “Runaways” meaning he had enough cash by Final Jeopardy to not be caught.

Tonight that was not the case and the unsure victory was one for the books.

‘IT ALL DEPENDS ON TROY’

In Double Jeopardy!, rival David went all-in on a Daily Double, got it correct, and by the end of it, things were close.

Final Jeopardy under “Landmarks” read: “Pskov & Nizhny Novgorod are 2 of the cities that have a fortress called this.”

Everyone was correct with “The Kremlin” so it all came down to who bet what.

“You are in the lead over our champion,” Ken announced as Kristina made a big cringy face in the middle of them.

Ken turned to the ongoing champ and told him: “It all depends on Troy’s response. Is it ‘Kremlin?’”

“Troy did it yet again!” one Twitter user wrote.

“Mr. Clark Kent will be in Tournament of Champions – this ended up being a more exciting game than I expected,” a third posted.

“Congrats to David on a hard-fought game that had me on the edge of my seat!” a fourth Reddit user wrote.

“And of course to Troy for securing his slot in the Tournament of Champions and showing that the high expectations of him were completely justified.”

A fifth fan applauded: “That was an extremely strong group of 3. Great game.”

A sixth wrote: “Amazing pushback by both David and Kristina! Could have easily been a different outcome. Troy was definitely very beatable today.”

Troy’s emotional wins see him looking up above near tears for the sweetest reason.

As Ken earlier revealed, Troy’s mother passed away last year, and they “shared a big love” of watching Jeopardy! together.

Troy also revealed on-stage that his wife Genevieve was a contestant in 2009 – they anonymously met online when she was practicing to compete.

Troy told the New York Times in their 2010 wedding announcement: “I talked to friends, and they thought I was absolutely nuts.”

They kept in touch as she prepped, but Troy didn’t know what she looked like until her episode aired.

Troy told the New York Times that before then: “I thought she was 55 years old.”

They finally met up in person after she competed: “Within the first 24 hours we just wanted to be together,” Genevieve told the New York Times. They now share a son, 10.

Troy – whom some fans have said looks like Bill Hader – also got complimented by Lady Gaga, he recanted in his first episode.

When he met her backstage after a concert, she said: “you’ve got great style!”

“I was wearing, like, a cardigan and shorts,” he said. “But, like, she noticed it, and I’ve been coasting on it ever since!”

Troy may be new to Jeopardy! but he’s no stranger to the world of quizzing.

He’s a four-time champ in the niche, invite-only Learned League, a trivia club that has 25,000-plus members, and Jeopardy!-like questions.

It’s no easy feat to “win the scarf,” the prize given to the secret league’s champ, four times.

Many Jeopardy! champs are, or secretly were, members including host Ken, per The New Yorker – he had to step down for obvious reasons.

Troy also humbly revealed he was on what is technically the “world’s best quiz team last year” in a post-credits scene.

He joined forces with Brandon Blackwell and Victoria Groce of The Chase and won the global competition Online Quiz League.

Brandon as well as another fellow Chaser have been in the audience for his games, and he’s definitely doing them proud.

Troy is now the fifth contestant to qualify for next year’s Tournament of Champions, though viewers don’t think he’s going home to prep anytime soon.

Jeopardy!Jeopardy!’s new star Troy Meyer was behind by $1 before he revealed his final response and wager – Kristina’s face said it all[/caption]

Jeopardy!He was correct, wagered a huge $14K and will be in the next Tournament of Champions[/caption]

JeopardyTroy’s wife was on Jeopardy! in 2009 and he’s on what’s considered ‘the world’s best quiz team’ with stars from The Chase[/caption]