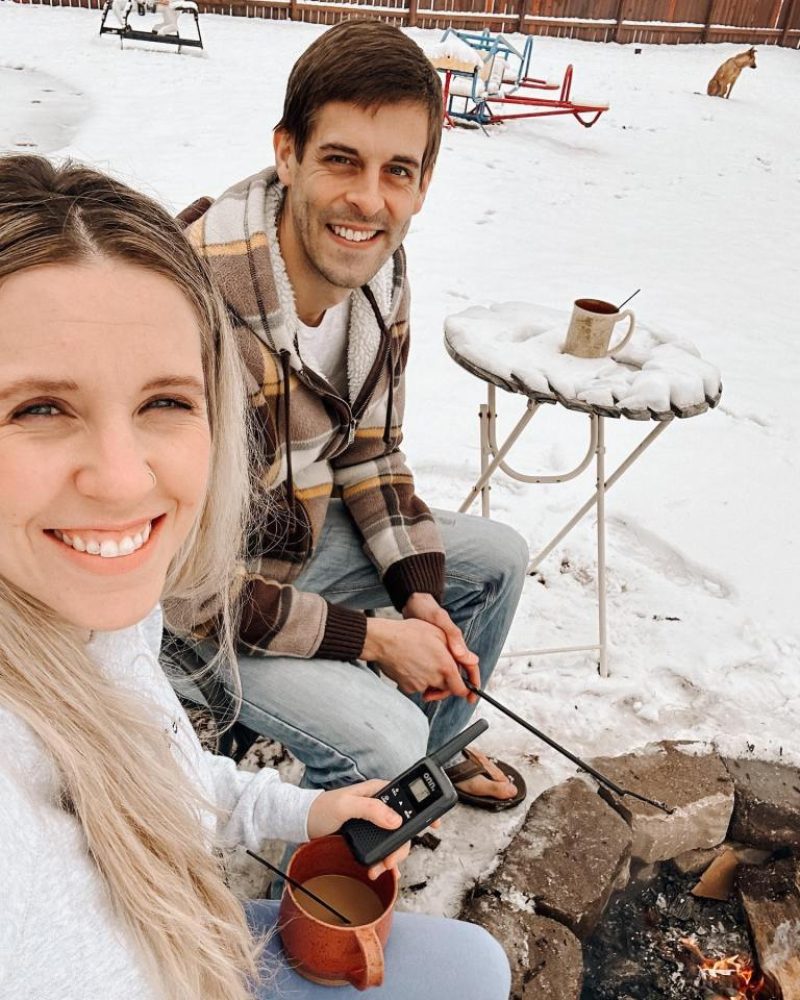 DUGGAR fans have spotted an unusual detail in Jill Duggar’s newest photo alongside her husband Derick.

The pair appeared to be enjoying a bonfire in the snow together, but Derick wasn’t quite prepared for the weather.

Jill shared a photo of herself sitting next to Derick in their snowy backyard around a fire pit.

The former 19 Kids and Counting star had on jeans and a sweatshirt.

She held a hot coffee on her knee, using one hand to balance it as she snapped the photo with the other.

Her husband appeared in jeans and a hoodie, which was lined with a sherpa-style material.

Derick’s feet could be seen in the snap, and fans couldn’t help but take note of it.

He appeared to be wearing flip-flops despite the cold weather.

” love mornings like these…coffee outside with my hubby in the snow by the fire!”

Fans flocked to the comments to react to his footwear choices.

One commenter wrote: “My husband would be in flip flops too.”

Another questioned: “How is Derick in flip flops?!”

Someone else wrote: “I swear all men are wearing sandals or shorts in snow.”

A fourth comment read: “Why does Derick have flip flops on???”

A sixth fan commented: “Way to be Derick in your flip flops.”

This isn’t the first time Derick has made headlines.

In fact, the star was recently accused of having thrown major shade at Jill’s father Jim Bob Duggar.

The Counting On star posted a photo of her husband wearing his massive phone as a holster on his jeans in a similar fashion to her famous father.

She shared the snap on her Instagram Stories with the caption: “Look at that.”

The photo was posted to a popular Duggar Reddit forum in a thread titled: “D’wreck channeling/trolling Boob with the god honoring phone holster.”

Critics sounded off on the fashion statement, with many taking aim at the reality star’s jeans.

“At first, I couldn’t tell if she was embarrassed by the clip-on phone case or the jeans with the highly decorative pockets. Because I’d be embarrassed by both,” wrote one commenter.

One jokingly questioned: “If my dad didn’t have his giant phone holster and bright white NB’s how would anyone even know he’s a dad?”

“Nothing screams conservative quite like the belt phone,” added another.

One added: “Listen, I also got the holster with my case when I bought the heavy duty Otterbox, but that doesn’t mean you actually have to USE IT, Derick.”