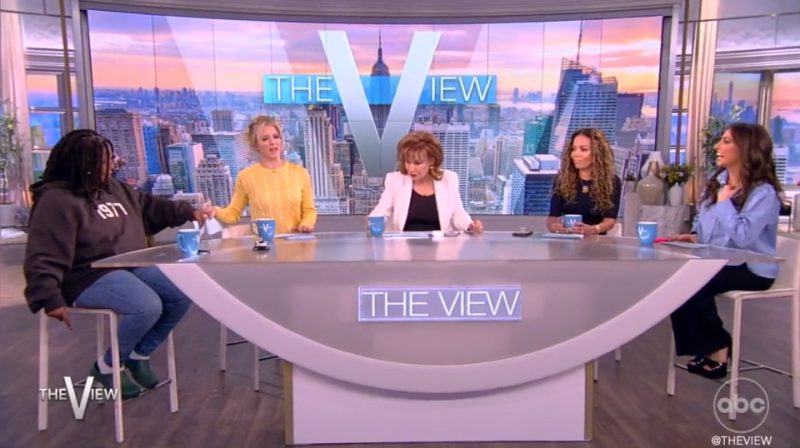 THE View host Whoopi Goldberg has caused chaos on set as Sara Haines chastised her.

The two women tried not to disrupt the live show when they noticed one of their drinks had spilled.

On Wednesday’s show, The View panel talked about the classified documents that were found in President Biden and former Vice President Pence‘s homes.

They were all having a civil and calm conversation until about halfway through.

As Alyssa Farah Griffin gave some inside knowledge on the subject, Whoopi was heard clearing her throat.

The camera panned out to show the whole panel and Sara looked over at Whoopi.

The moderator pointed to the ground, which caused Sara to look where she was pointing.

She scooted in her seat and took the card in front of her to try and wipe it up.

“Whoopi spilled water and now it’s on my pants,” the host said.

Alyssa laughed and said: “Oh. We had a little spillage on the other side of the table.”

Joy Behar was having none of it as she told Alyssa: “Alright. Forget it. Go ahead.”

Whoopi and Sara tried to clean up the water by picking up their cards and scooping it off of the table.

Alyssa tried to continue her thought, but couldn’t because she started to laugh.

She eventually continued her point and got to finish.

When Whoopi spoke up, the camera panned out again and Sara was still seen cleaning up the liquid with napkins.

Throughout the conversation, the hosts picked up their papers and dried the desk.

At the end, Whoopi chimed in again with her opinion and as she spoke, she continued wipe down her cards.

This isn’t the first time Whoopi made a blunder on live TV.

Earlier in January, Sara was forced to correct the moderator as they talked about  Rolling Stones‘ list of the 200 Greatest Singers Of All Time.

The publication shared its collection of the best musicians at the start of the month to mark 2023.

Whoopi expressed her rage at the outlet for missing out several hugely talented singers, including the late icon Ella Fitzgerald.

She fumed: “Ella Fitzgerald is not on the list! No!”

The comedian went on to name more notable musicians that were absent like Nat King Cole, MC Hammer, and Kenny Rogers.

When Whoopi finished her tirade, Sara had to step in to say, “I have a correction – Ella Fitzgerald is on there.”

The host looked uncomfortable as she turned to the audience and joked: “So that’s good news!”

The camera then panned to one of the show producers, who sat in the audience looking stern.

Another crazy on-air moment between the two hosts happened when Sara called Whoopi out for interrupting her back in December.

However, the moderator shut Sara down and told her she was “just listening” during an awkward moment.

The View panel began by talking about a graphic designer in Colorado who refused to make a website for a same-sex couple.

After the women talked about the issues, Sara spoke up about her views on the subject.

“But this graphic designer and that cake baker both serve clients who are homosexual. Their issue is with marriage,” she said.

“Which, I disagree with, but I also would never want someone baking my cake-,” she stopped as she looked at Whoopi with a panicked expression.

Whoopi looked at her and shook her head as Sara asked: “What?”

The moderator didn’t say anything, and Sara explained herself.

Sara and the co-hosts went on to discuss the issue, after she recovered from the awkward moment.

ABCWhoopi tried to get Sara’s attention at first, without interrupting Alyssa[/caption]

PrevPreviousPAW Patrol The Mighty Movie: Who is in the cast?
NextTeen Mom fans call for star to be fired from show for good after taking ‘zero accountability’ for ‘dangerous’ behaviorNext