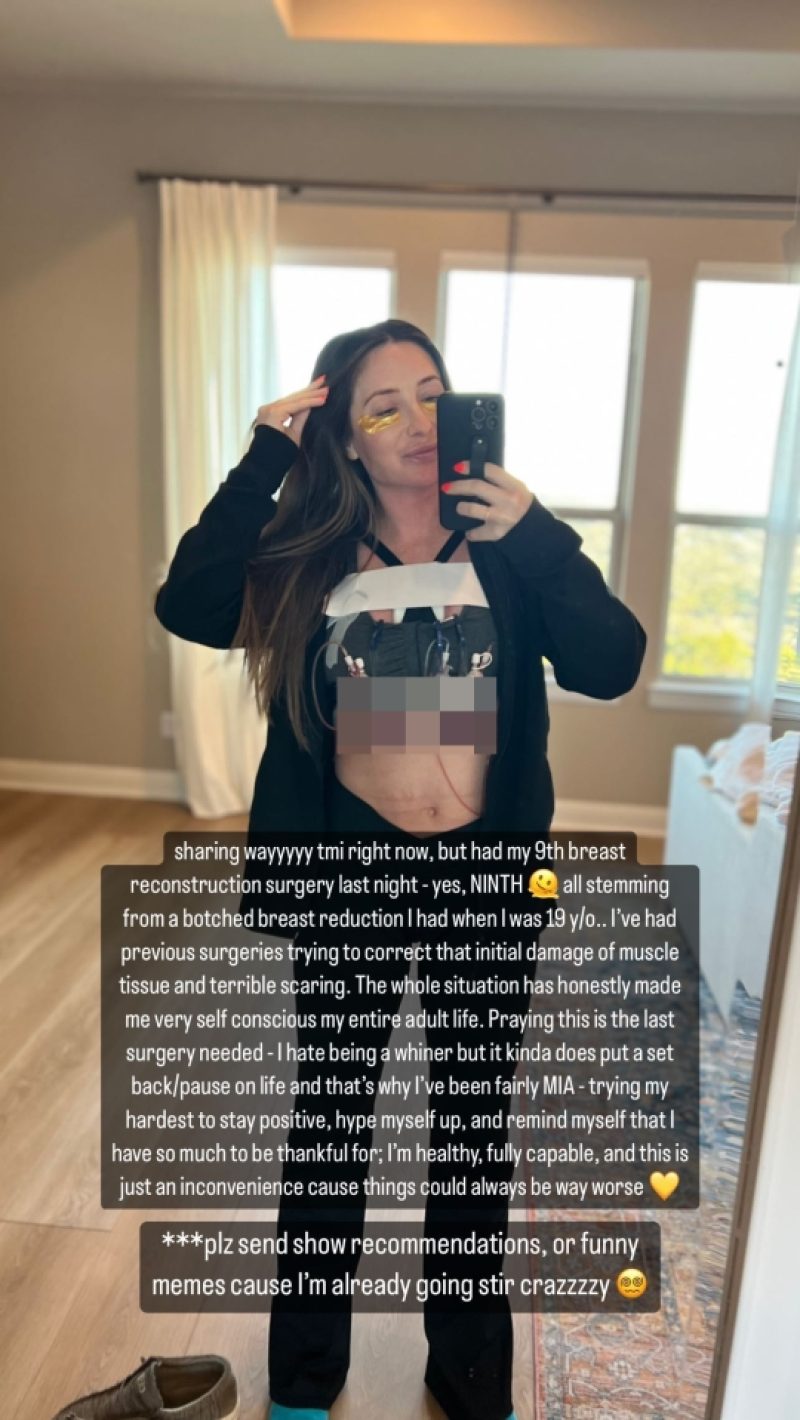 TEEN Mom Bristol Palin has taken to social media to reveal that she has undergone a ninth breast augmentation procedure.

The ex-MTV star opened up about the body image issues she has struggled with since her original “botched breast reduction.”

Bristol, 32, shared the post-surgery photo on her Instagram Stories Wednesday.

The mirror selfie showed the Teen Mom OG alum wearing a medical bra that had attached drainage receptacles filled with the collected blood and fluid from the surgery site.

The mother-of-three captioned the snapshot, “Sharing wayyyyy tmi right now, but I had my 9th best reconstruction surgery last night.”

Bristol continued, writing: “Yes, NINTH,” before explaining that her repeated surgeries all stem from “a botched breast reduction” she had when she was 19.

The TV personality mentioned: “I’ve had previous surgeries trying to correct the initial damage of muscle tissue and terrible scarring.”

“The whole situation has honestly made me very self-conscious my entire adult life.”

The reality star then wrote: “Praying this is the last surgery needed,” adding “I hate being a whiner but it kinda does put a setback/pause on life.”

Concluding on a more hopeful note, Bristol stated: “Trying my hardest to stay positive, hype myself up, and remind myself that I have so much to be thankful for.”

She later asked for followers for “show recommendations” or “funny memes” to occupy her time as she’s already going stir-crazy as she recovers from the procedure.

Over the summer, Bristol posed for a much different type of selfie as she flaunted her toned tummy in a tiny yellow crop top.

The former Teen Mom showed off her rock-hard abs in a tiny yellow crop top as she checks in with fans on Instagram.

The 32-year-old took to the platform to share a mirror selfie of her cute outfit while also showcasing her figure in the flouncy top, paired with tight jeans and a black purse.

Bristol wore her hair in loose beachy waves and sported full-glam makeup for her outing.

The Alaska native captioned her post simply, writing: “Ma” with a sparkling emoji and glasses emoji.

Bristol appeared on one season of Teen Mom OG before leaving the series and actively pursuing her real estate career in Texas.

The Sun exclusively revealed last month that the mother-of-three has sold $15,376,962 in real estate properties, according to Realtor.

The amount is just the minimum, as Bristol has also sold homes where purchase prices weren’t public record and has worked on rentals.

One of Bristol’s biggest sales was a four-bedroom, six-bathroom Spicewood, Texas mansion that was listed for $2,299,000.

Bristol currently has 10 active listings, with the most expensive being a five-bedroom, five-bathroom mansion listed for $1,995,000.

Bristol recently celebrated her fourth year in the business in May on Instagram.

As for her personal real estate, Bristol owns two homes in Texas, where she lives with her children.

She is mom to son Tripp, 14, from her previous relationship with Levi Johnston, and daughters Sailor, seven, and Atlee, 5, who she shares with ex-husband Dakota Meyer.

Bristol appeared on Teen Mom OG in 2018 after Farrah Abraham was fired from the series.

Her storyline revolved around her marriage breakdown with Dakota, who she divorced the same year she joined the show.

Bristol quit the MTV series after just one season, as she said the series “wasn’t a fit” and took away her “peace.”