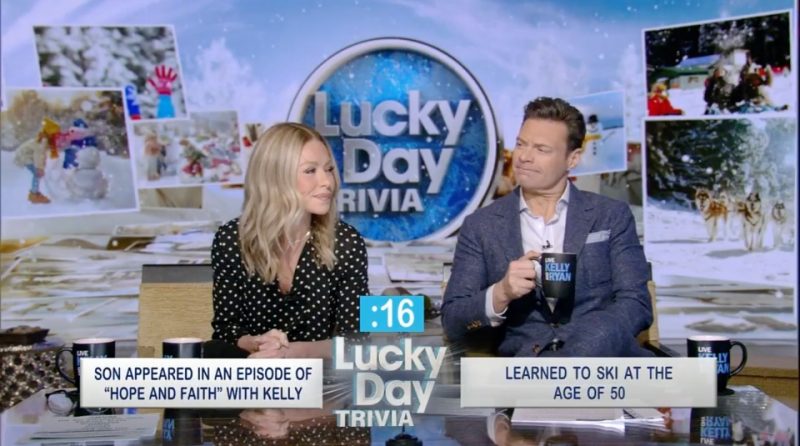 LIVE With Kelly and Ryan host Ryan Seacrest has mocked his co-host Kelly Ripa about her attitude.

The live moment came when the two were playing Lucky Day Trivia.

On Wednesday’s show, Ryan and Kelly welcomed Jackie Heins, from New Jersey, virtually to the show.

During Lucky Day Trivia, the co-hosts get two statements about the guest.

One is true and one is false and they have to guess which one is true.

If the guest stumps Ryan and Kelly, then they win a mug from the show.

“So, she says, ‘My son appeared in an episode of Hope & Faith with superstar, Kelly Ripa,” Ryan said.

The crew made “ooo’ing and ahhing” sounds and Ryan delivered his first dig.

“Alright, everybody calm down,” Kelly said.

“She’s here everyday,” the American Idol host said, as he made a cringey face.

The Live! co-hosts asked Jackie questions including the name of the episode her son was in and if he worked with Kelly specifically.

She gave them the answers and then Ryan asked what her son said it was like to work with Kelly.

“He said that you were wonderful. That you were one of the best actors he worked with,” Jackie said.

Ryan delivered his second dig of the segment when he shook his head and said: “That can’t be true.”

It turns out that Jackie’s son did work with Kelly on the show, but isn’t acting anymore.

Hope & Faith was a sitcom starring Kelly and Faith Ford, who played sisters that move in together.

‘WE NEED SOME HUGS’

When Jackie told Ryan and Kelly that it was true, she also told them more about his time on the show.

And Ryan delivered another dig.

Jackie said that her son ran up to the actress and told her to break a leg.

Kelly responded with: “Thanks so much, Trevor,” and then gave him a hug.

“You made his year,” Jackie said.

“Awwww,” Kelly said, with a huge smile on his face.

Ryan then mocked his co-host again and said: “Why don’t we get that around here? I want some hugs.”

Ryan and Kelly participated in the new segment, The Best Me in ’23!.

However, this time, Kelly, who was still sick, was not in workout gear and Ryan was.

When Live! came back from commercial, she was already laughing as he played with a workout rubber band.

“Are you in your judging position? Is that where you’re going to be?” Ryan asked.

“Right here,” she responded and held up her hand.

The hosts were joined by Melissa Wood Tepperberg, who was going to lead Ryan in a workout.

Ryan and Melissa put the resistance band around their thighs.

He had a hard time with it and whispered: “Oh geez.”

Kelly stood on the sidelines and laughed hysterically.

“Would you stop? I can hear you,” Ryan snapped.

Kelly continued to laugh as she sat down on the stage and watched her co-host attempt the workout.

A few minutes later, Ryan mellowed out a bit, as he looked at his co-host and they both laughed.

ABCRyan delivered many digs to Kelly, including telling the crew ‘she’s here everyday’ after they cheered for her[/caption]