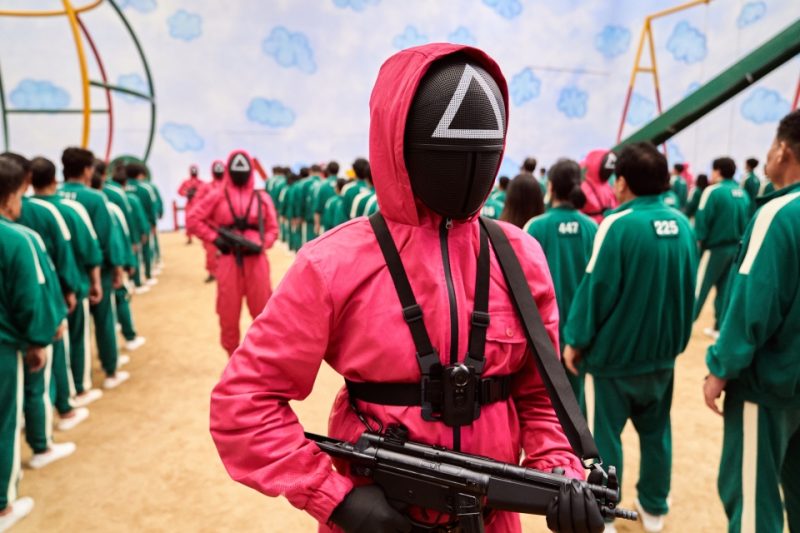 NETFLIX could face a class action as dozens of contestants in a real-life Squid Game show claim they were “treated like animals”.

A large number of players told The Sun they are considering suing the company.

Contestants were allegedly made to stand for hours in temperatures of -3C.Andrew Styczynski – The SunThe game show is being filmed at Cardington Studios — a former RAF base — near Bedford[/caption]

Participants said the game show — based on the gruesome TV Squid Game hit about a deadly contest — quickly became a nightmare on Monday when they were made to stand for hours in temperatures of -3C.

One player said: “We were tortured for eight hours. We were just fodder. You wouldn’t treat animals like that.

“I know the show was supposed to be tough but it felt inhumane.

“At one point I could see they were bringing on a black coffin with a pink ribbon just like in the original show.

“I feel like they prioritised getting a good shot over helping us.”

Another contestant said they saw a woman collapse in front of them during one of the breaks in the game.

They said: “Her head hitting the floor echoed around the studio before she started having what looked to me like a seizure.

“Then another lady collapsed. They were dropping like flies.

The Sun yesterday told how many players left the UK set in tears after filming for the first game — Red Light, Green Light.

Producers had given contestants heat pads but took them away before the cameras started rolling.

The streaming giant invited 456 hopefuls to competet for a £3.7million prize. The edited show is set to be released as a ten-part series.

In the fictional 2021 South Korean TV series players who lost the game were shot by machine guns.

Those in the reality show version were given blood packs under clothing to be triggered automatically if they moved during the pause — to make it look like they had been shot.

Some of the players complained that the show was unfair and that they had been wrongly eliminated.

In a video seen by The Sun which was taken on Tuesday, 44 losers gathered to chant “We didn’t move” while waiting for their flights home.

One contestant said: “My blood pack exploded even when I didn’t move, as did many other people’s.”

Some players came from as far away as the US, Dubai, New Zealand and Australia to take part.

The game show is being filmed at Cardington Studios — a former RAF base — near Bedford.

Netflix has denied that anyone was seriously injured during the game and said that three people required minor medical assistance.

The streaming giant said that it, along with Studio Lambert and The Garden — two production firms making the show with Netflix — take contributor care as a high priority and “regular toilet breaks, water and food are categorically standard practice on production”.

It added: “All precautions were taken to ensure the game was played safely.”