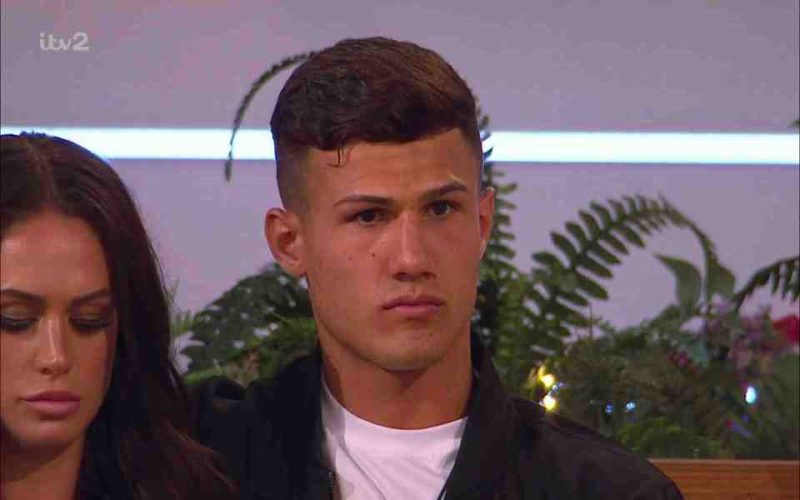 LOVE Island ‘thug’ Haris Namani has broken his silence after being dumped from the villa.

The TV salesman was sensationally forced out hours after The Sun revealed footage of him embroiled in a violent street brawl.

Fans were left shocked by the footage of Haris’ street brawl

Speaking after leaving in a planned eviction, Haris has now defended his actions in the tape.

He said: “I’m devastated that this video has been seen, it’s not a reflection of my character.

“I’m not someone that goes looking for fights and I didn’t want to be in that situation. This was a heat of the moment thing.

“The video doesn’t show everything that happened. Afterwards we met up and we cleared the air; we’ve shaken hands and we get along now.

“It’s not something that would happen again.”

The footage, revealed by The Sun, shows the Love Island star involved in a brutal fight.

In the video Haris is seen punching a man before following him and knocking him down with a second swipe.

After the clip was shared with The Sun, a friend said they were shocked to learn Haris had been accepted onto the hit ITV2 show.

They said: “We were all surprised when we heard Haris was going on Love Island.

“He’s got quite a bit of a temper on him and if someone says something he’s more than prepared to have a fight.

“He’s got an advantage being a boxer and he knows he can cause damage because he trains four times a week.”

Just days into his Love Island journey Haris was involved in a heated bust up with Shaq following a game of ping pong.

Shaq branded Haris a “s***-stirrer” after he asked bombshell David Salako if he enjoyed his snog with Shaq’s missus Tanya Manhenga.

Fresh from the villa, Haris commented: “We’re friends. I knew 100 per cent nothing would have come from that disagreement and we would hug it out.

“I said sorry for my part and he said the same and that’s it. We were the first two in and we got along after that as normal.

“I’ll miss the memories, waking up in the villa, being around people you’ve never met before and getting to form strong connections with them.”

Haris had begun to form a connection with ring girl Olivia Hawkins but was dumped from the villa by bombshells Jessie Wynter and Aaron Waters.

Haris added: “It was hard for them to make that decision!

“From the get-go me and her had mutual attraction to each other.

“When we coupled up I felt we were getting closer than we were at the start.

“She’s a very good looking girl, her energy, the way she presented herself, the flirting, the funny side to her, she was a nice girl as well.”

Haris was dumped in the eviction alongside Anna-May Robey.

Love Island continues tomorrow at 9pm on ITV2 and ITVX

All about Bond actress Olivia Hawkins
The villa’s first partially-sighted star Ron Hall
Who is Tanyel Revan?
Everything to know about Kai Fagan
Make-up artist to the stars Lana Jenkins
Who is TikTok farmer Will Young?
All about science student Tanya Manhenga
Everything to know about Shaq Muhammad
Who is Love Island’s Anna-May Robey?
All about Haris Namani
Bombshell and footballer Tom Clare
Who is Love Island bombshell Zara Lackenby-Brown?
Australian beauty Jessie Wynter explained
All about Aaron Waters
The full Love Island cast revealed
PrevPreviousReal-life Squid Game contestants blast they were ‘treated like animals’ and threaten Netflix with legal action
NextBachelor Zach Shallcross’ season premiere ratings sink to worst of all time as execs fear show could be canceledNext