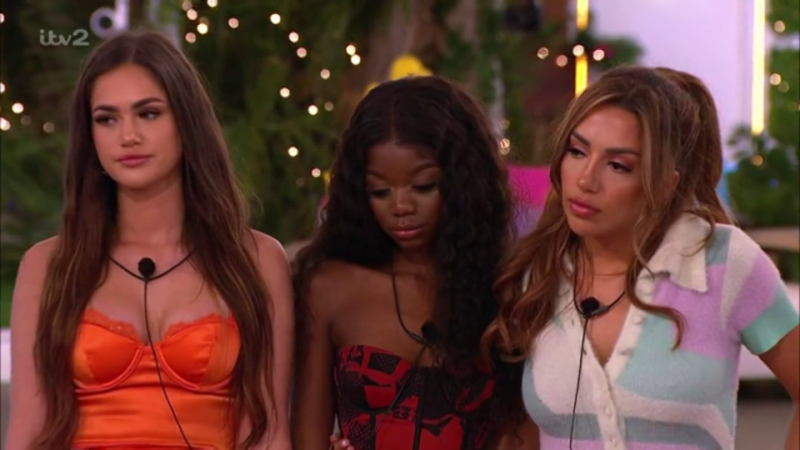 THE Love Island villa was rocked tonight by a brutal double dumping – as two show favourites were sent packing.

Anna-May Robey and Haris Namani were chosen for the chop in brutal scenes on Wednesday night.

Anna-May, Tanya and Tanyel found themselves in the firing lineThe at-risk Islanders had to stand infront of the firepit tonightAnna-May and Haris – seen here in the first episode – were sent homeRex

In a cruel twist, the public were asked to choose their favourite boy and girl – with the bottom three of each made to line up at the firepit.

But it fell to Love Island’s newest arrivals, Australians Jessie Wynter and Aaron Waters, to decide who got dumped.

The pair picked Anna-May and Haris, insisting that the basis for their decision lay in who had the most potential to succeed in their couples.

Jessie was shown getting tearful during the decision, which resulted in Anna-May and Haris both having to go home to the UK.

The Aussie explained: “We think everybody standing up here is absolutely incredible.

“However we had to make our decision based off who has the most potential to grow and develop and we personally think these two people have had a lot of opportunity.

“However, we just don’t know if there’s much further they can go. The Islanders we have decided we are sending home tonight are – I’m so sorry – Anna-May and Haris.”

The Sun revealed on Tuesday that Haris has been evicted – after footage of him emerged taking part in a street brawl.

However, he did not leave because of the footage with his departure – filmed earlier in the week – part of the planned eviction.

A source told us: “It is, in part, a relief for the show’s bosses in light of the video of Haris in a street fight.”

Olivia was shown covering her face, unable to watch, at one pointJessie and Aaron were shocked on being told they’d pick who goes