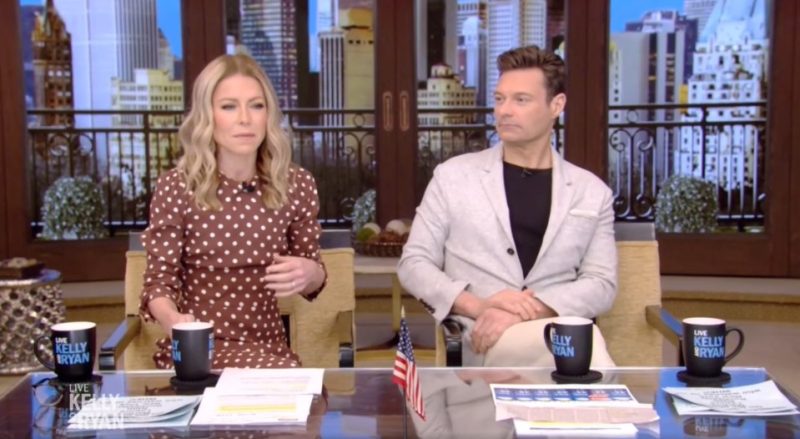 LIVE With Kelly and Ryan host Kelly Ripa has thrown major shade at her show’s producer.

Kelly, 52, started off Tuesday’s show by sitting back in her chair and saying: “Well, another day, another team of executives here.”

She had a mad expression on her face before sitting up in her seat.

“Tuesday, January 24. Good morning and welcome to Live! The only show where you can walk out one second before you go on the air,” co-host Ryan Seacrest said.

Kelly spoke up and said: “45 seconds is like six weeks in live TV, isn’t it?”

“I went to the bodega to get a sandwich,” she joked.

“Grabbed Kelly with seven seconds to spare, walked down the hallway, and here we are! Good morning,” Ryan, 45, said.

“He saw me backstage and he said, ‘Where are you? What’s going on?’” Kelly said.

“Cause she was not there. She was there physically, but not mentally,” The American Idol host explained.

Kelly said that she was “there physically, but she wasn’t in her body.”

“And he goes, ‘What happened?’ And I go, ‘Gelman just briefed me on something.’ And you know I tune him out, so then I had to come back into my body,” she said.

“Which is a process apparently,” Ryan laughed.

“I was like ‘Sorry. I just had to tune out everything that was said,” Kelly explained.

Michael Gelman is the show’s producer, who Kelly and Ryan defy all the time.

Ryan was also “rude” to Gelman on the same episode.

He stormed off the set in a dramatic fashion.

Live with Kelly and Ryan had just returned from its commercial break when Ryan took note of Gelman snacking off-stage.

“Excuse me, are we interrupting something here?” Ryan asked a producer off-camera before jumping back into the show.

“He’s having breakfast,” Kelly said as Ryan jumped out of his seat and walked over.

“Would you like a frittata?” Ryan asked Gelman sarcastically.

“No, I’m getting my sugar up,” Gelman replied with a grin.

“Can we get you some bacon?” he continued before walking back over to Kelly.

“Getting his sugar up? He needs his sugar,” Kelly echoed cheerily.

“Alright, let’s go. We’ll do the show while he has brunch,” Ryan muttered as he made his way back to his seat on set.

Earlier this month, Kelly gave a warning to their producers once again.

She said that she “wants time off” after viewers worried she was “forced” to work when she was sick.

She joked: “At that point I’m hoping to be retired. If I’m still going, you all have an obligation, okay?”

Kelly went on: “You have to be a good friend.”

Ryan then asked his co-host: “How will you make this decision to be a supermodel or a backup dancer for Madonna’s show?”

Kelly replied: “Do I go on the road with Madonna? Either way, I’m going to need a sabbatical.”

Ryan added: “Either way, time off required, and time off soon please.”

The Live with Kelly and Ryan star left viewers concerned earlier this month when she co-hosted the show despite being ill and barely able to talk.

NBCLater on in the episode, Ryan had yelled at Gelman again for eating while they were on air[/caption]