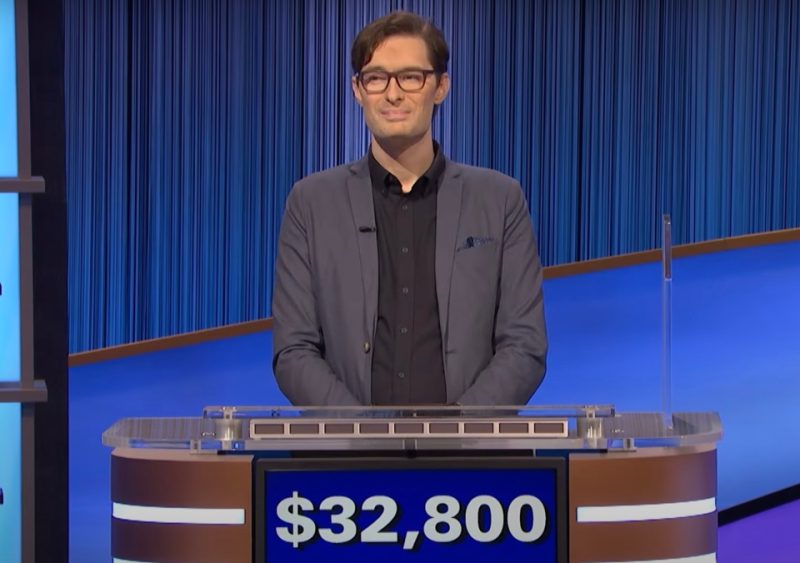 JEOPARDY! fans were left doing a Daily Double-take for the funniest reason during Tuesday’s episode.

ABCJeopardy! contestant Troy Meyer may be the show’s next big winner[/caption]

The reigning champ faced Linda Napikoski, an ESL instructor from Phoenix, Arizona, and Joe, a film and TV publicist from Los Angeles, California.

Troy, a music executive from Tampa, Florida, won his fourth game with $40K and a four-day total of $137K.

While Troy has not yet met his match gameplay-wise, it seemed to fans that he did so in a more literal sense.

Jeopardy! Twitter couldn’t stop posting how he and Joe at the middle podium appeared to look strangely similar.

Not only that, but the two contestants coincidentally wore “reverse” outfits to each other, fans posted, and their hair parted in the exact opposite direction.

One user wrote: “Is it me or do the two male contestants on Jeopardy! look like they were separated at birth?”

Another wondered: “Does anyone else think Troy and Joe both could’ve played Clark Kent at some point in their lives?”

A third asked: “Is anyone else seeing double on tonight’s Jeopardy? Troy and Joe could be brothers!”

A fourth added: “I really like how Troy’s and Joe’s looks are a reverse of each other! Joe’s hair is even parted on the opposite side.”

A fifth agreed on the Superman-in-disguise category: “It was strange watching 2 Clark Kents at the same time!”

As a fifth replied to them: “I know, it was uncanny!”

Troy now qualifies for the 2023 Tournament of Champions, though five wins would seal the deal.

Fans have not been shy in admitting the promising rising champ also looks a bit like actor Bill Hader.

Ken Jennings, 48, has hosted what may be the next big winning streak since all of Troy’s wins have come with huge dollar signs.

Co-host Mayim Bialik, 47, is expected to return to the game show in late February.

GettyYet another viewer joked: ‘It was strange watching 2 Clark Kents at the same time!”[/caption]