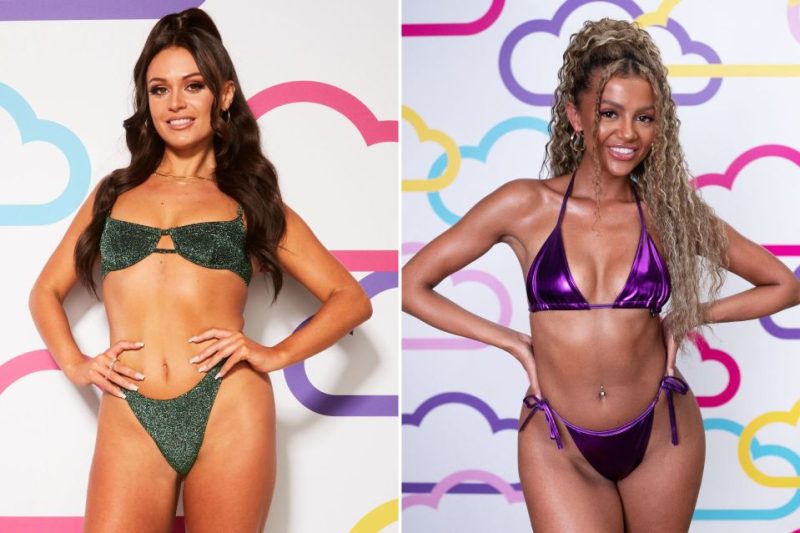 LOVE Island bosses have certainly got their money’s worth with bombshell Zara Deniz Lackenby-Brown.

The 25-year-old part-time model from London has wasted no time in treading on toes – sparking an early feud with ring girl Olivia Hawkins.

The women have had multiple bust-ups in the Love Island villa over the course of just a few days, locking horns over footballer Tom Clare.

It’s clear there’s no love lost between the pair – who fans believe knew each other before going on the show – but they did ‘hug and make up’ after clearing the air in the morning.

On last night’s show the pair were seen fawning over each other’s outfits and complimenting their looks – but body language expert Judi James isn’t convinced their newfound friendship is genuine.

She tells The Sun: “Zara and Olivia’s oddly out-of-context ‘truce’ scene in last night’s show looked like the most chilling moment between them yet.

“This was what is called a fake-up, not a make-up, and this kind of non-verbal masking, with its performance of pretend friendship rituals, could have taken their relationship to a whole new level of warfare.”

She says when Zara and Olivia switched from “snarling and open power-play to hugging and flattery, the red flags really started to show”.

“Concealment and masking create genuine fear and paranoia of plotting back-stabbing,” she adds.

Judi says during their first truce, both girls’ body language suggested a power battle was at play.

“When the girls sat on the bean-bags performing their first cease-fire ritual, they both used hair-preening rituals as an excuse to pit-bare at each other,” she observes.

“Their elbows went up with their hands behind their heads to display their armpits at each other in a power splay.

“Splaying signals show dominance and superior status and this subliminal battle made the cold hug that followed look like a fake gesture.”

Afterwards Judi said there was “parading and goading”, with Olivia sat flirting with Tom in direct sight of Zara, and Zara chatting up Shaq in response.

In last night’s show during the sexy Space Raunch challenge, many fans observed how Zara appeared to take a swipe at Olivia by appearing to aim a ball at her face.

Judi says Olivia and Zara used “exaggerated masking” to hide their true feelings towards each other.

“Their voices rose to a higher tone as they threw words of flattery and ‘affection’ at one another, like ‘gorgeous girly’ and ‘you look cute tonight’,” she explains.

“Given their previous behaviour, this fake sweetness seemed to announce they were playing their cards really close to their chest.

“A compliment from an enemy is always chilling because you wait for the real punchline.”

Judi says the way the two rivals touched each other looked like mimed attempts to put each other in their place.

She observes: “Olivia touched Zara on the shoulder to ‘pull’ her, Zara stretched a hand out to touch Olivia’s hand, and Olivia put a hand on Zara’s knee.”

Judi also remarks how their dialogue was very formal at times, adding: “The phrase, ‘I appreciate you telling me’ was a line from a job interview, not a woman who had previously been snarling the moment Olivia approached her man.”

Judi says both girls wore “masked smiles”, behind which the verbal messages were “announcing a continuation of hostilities”.

“Olivia was telling Zara she was still going to try to snaffle Tom and Zara was telling Olivia ‘back off because he fancies me more’,” she says.

“Olivia in particular was smiling but her teeth were clenched in the smile, showing inner tension.”

‘Here for the drama’

With rumours Olivia and Zara were acquainted before the villa, Judi suggested their rivalry could be teamwork to bag camera-time.

She says: “Last season it was Ekin-Su Cülcüloğlu bringing her own dramatic set-pieces that the viewers adored, and it’s hard to imagine someone else wouldn’t be stepping up this season.

“Olivia, Zara and Tanyel are all up for the Ekin-Su crown so far, and every time Olivia announces she’s ‘Not here for the drama’ she lets us know she is.

“The problem for Olivia and Zara is that acted dramas can easily get real, and there was one flashpoint that suggested one of them had taken things too far.

“When Zara picked Olivia as being ‘two-faced’ during the beer pong challenge, things might have moved to a different level.

“Islanders do act up for the camera and most of them are busy faking their feelings, but calling someone out openly could be setting doubts in the viewers’ minds and scuppering any chance of a series win.

“All the fake tears in the world won’t win the fans round once they feel they’re being duped.”