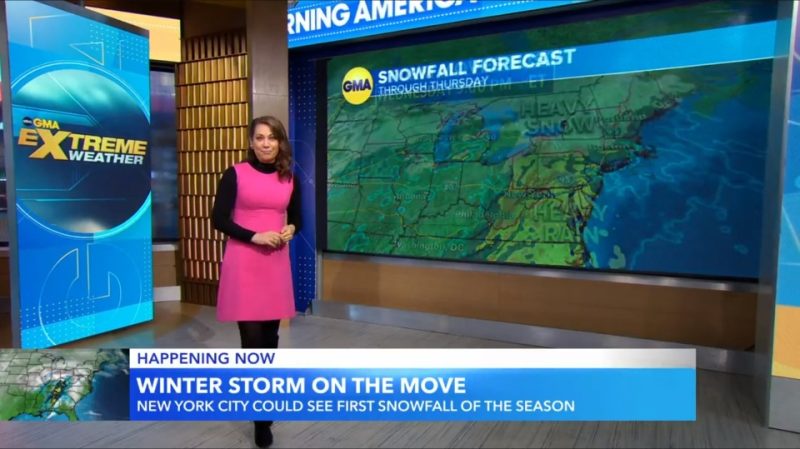 GMA fans have gone wild as Ginger Zee has shown off her long legs in a bright pink dress after she took body-shamers to task.

Ginger delivered the GMA weather forecast on Wednesday morning in an eye-catching outfit.

GMA’s Ginger Zee gave Wednesday morning’s weather forecast in an eye-catching outfitABCShe opted for a bright pink minidress, which she wore with a long-sleeved black shirt, leggings, and bootsABC

The meteorologist wore a bright pink minidress, which she paired with a long-sleeved black shirt and matching leggings and boots.

This choice of outfit comes after the 42-year-old clapped back at a series of body-shamers with her return to GMA.

Fans were especially excited about Ginger’s choice of clothing for the day.

One viewer named Susan wrote: “I don’t typically comment on clothes but I so love what you are wearing today.”

Another shared: “pink is a good color for this dreary day!”

A third commenter wrote: “Pink is really your color Ginger..”

Meanwhile, Ginger showed off her toned stomach in a T-shirt calling herself a “cool mom.”

Ginger, who shares two kids with her husband, Ben Aaron, shared an Instagram video on Tuesday of herself getting dressed for GMA.

While in her dressing room, the star first showed off what she arrived in, layer by layer.

Her bright blue long-sleeve shirt had the words “weather girl” and “meteorologist” on it, with the first set of words crossed out.

She then took off this layer, to reveal a tiny T-shirt underneath, which lifted up at the bottom and showcased Ginger’s toned tummy.

The final piece of her casual ensemble was a pair of Good Morning America sweatpants.

At the end of the clip, a transition revealed Ginger fully changed into her on-air, glammed-up look of a white blouse and black shirt.

In the caption, Ginger wrote: “Didn’t realize I was LABELED head to toe this morning but I can always count on @samwnek & @maxgolembo to point that out.”

Before rocking her “Cool Mom” tee, Ginger turned heads when she shared a selfie of herself working out in a strappy black bra.

She talked about the lack of snow that the country was getting this winter.

The meteorologist then showed clips from GMA, where she talked about snow totals.

Throughout the video, Ginger walked on the treadmill, and at the end she appeared to be laying down or standing still with a green screen screenshot behind her.

“Treadmill chronicles – just thoughts from a hike about late starts to snow or low snow and climate. Nobody’s said human-induced climate change CAUSES snow. We amplify extremes & modify the geography/seasonal change more quickly than nature would have naturally according to the climate science. @maxgolembo @samwnek @climatecentral,” the 42-year-old captioned the post.

But, Ginger’s outfit was the thing that drew the most attention.

She wore a gray tank top and red leggings.

Her bra straps were not hanging out of the top of her shirt, but rather the front.

Ginger’s bra appeared to have straps across the chest that poked out of her shirt.

She was back to her regular workouts, and work, after recovering from a sickness last week.