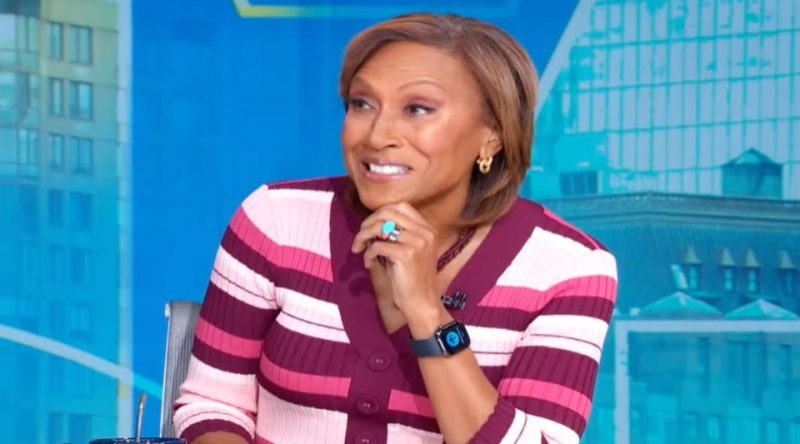 During today’s broadcast, a message on Robin’s, 62, Apple watch was caught on camera while she was co-hosting live on GMA.

While the 62-year-old was sitting at the GMA news desk alongside George Stephanopoulos, 61, Michael Strahan, 51, and Lara Spencer, 53, her Apple watch alert notified her to “move a little.”

In entirety, the ABC star’s alert read: “Time to stand! Stand up and move a little for one minute.”

Alongside the written message was a green arrow symbol that was captioned, “stand!”

The TV personality’s Apple notification came in just before the GMA squad went to a commercial break.

Many fans picked up on Robin’s note from her watch and commented about it on Twitter.

The fan’s tweet included a GIF of the Penguins of Madagascar dancing with the GIF caption: “MOVE IT GIRL!!”

Replying to her fan, Robin commented on the fan’s tweet: “HA! You caught that!”

On Wednesday the media commentator posted a video of herself, in what appeared to be her GMA dressing room, sharing with fans some helpful tips.

Robin explained to her fans that it’s important to write down goals and “what you want to see happen in your life.”

In the video, she said a prayer and encouraged her fans to “declare” their future, write “letters” to themselves and work towards “manifesting” their dreams.

Robin called what she had to say in the clip her “morning message and prayer.”

She captioned her social media flick: “Good morning [the] #GlamFam and I [are] sharing with you a bit of #WednesdayWisdom #cmon.”

Many of her fans took to heart what she expressed, commenting their appreciation for it on her post.

One fan expressed: “Thank you, Robin! WOWZA! I’ve been putting writing the letter off but not anymore! Doing it today and knowing I AM.”

Another shared: “Lovely words of encouragement on my favorite day of the week!…”

A third person added: “…This is such a powerful message ! Speak the words of what you need, what you seek, send them out to the Universe ! Speak Gratitude and Humility! The blessings will come!…”

The Women’s Basketball Hall of Famer appeared to have on her Apple watch during the Instagram clip too.