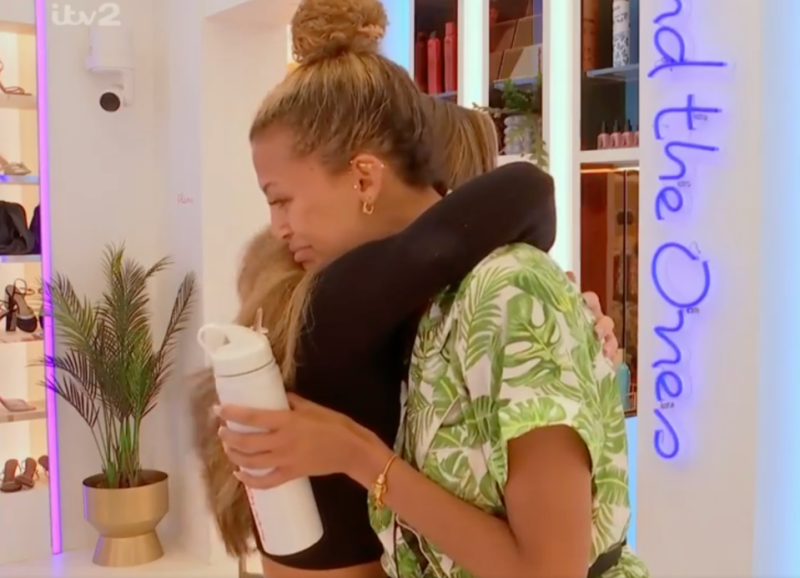 LOVE Island bombshell Zara Lackenby-Brown has been accused of shedding “crocodile tears” after her explosive row with Olivia Hawkins.

The fiery model, 25, broke down as she was comforted by Jessie Wynter in the dressing room.

ErotemeTom is stuck in the middle of the love triangle[/caption]

It’s after she flew off the handle at Olivia for pulling Tom for a chat in front of her.

Olivia stormed off in tears, with most of the girls running to her side.

One said: “I ain’t buying the crocodile tears from either one of these girls.

“Olivia can play the victim all she wants but she’s instigating the drama with Zara.

“And Zara knows that she’s pissing Olivia off by talking about Tom and rubbing the fact she took him.”

Another added: “The fake crying from Zara…I can’t.”

Someone else asked: “Why is Zara crying please?? So fake.”

“I can’t tell if Zara was fake crying or not,” another fan considered.

Zara confronted Olivia, demanding to hear what she and Tom had discussed, but it didn’t go down well and the boxing ring girl said it was a “private” conversation and branded the model a “game player”.

The women have clashed on numerous occasions in the Love Island villa in just a couple of days.

As tensions grew on last night’s episode, Zara pressed Olivia for further information after the latter pulled Tom for a chat.

Olivia hit back: “Are you married to him?”

The argument reached its peak as Zara said to Olivia: “Why do you think I’m here? To p**s you off?

“Do you think I’ve flown 11 hours from England to piss you off? Get over yourself Liv.”

Body language expert Darren Stanton described how Tom – who is at the centre of the love triangle – reacted to the row.

He also believes Zara “wears her heart on her sleeve”, while Olivia is more “controlled”.

Speaking to The Sun on behalf of Spin Genie, Darren said: “Tom’s reaction was one like a child being reprimanded by his mother.

“He gave a very embarrassed smile, looking down, not knowing who to look at and what to say as he felt completely awkward in the situation.

“Zara clearly was more worked up and anxious over the interaction.

“She was showing signs of extreme outrage in her face when she pulled her eyebrows together and down, signalling anger, whereas Olivia did not display this.

“It’s clear Olivia has got a much greater threshold for conflict than Zara, despite her getting emotional shortly after their clash. Zara is much more fiery and wears her heart on her sleeve, while Olivia is a lot more controlled.

“Tom is going to have to be strong and resolute and start to speak his mind if he wants to avoid any other major conflicts between the two girls.

“At the minute, he is coming over as weak. I truly believe he is out of his depth with Olivia and judging by his non-verbal communication around her, it implies he wants to be with Zara instead.”

Olivia was left in floods of tears after the tense exchangeEroteme