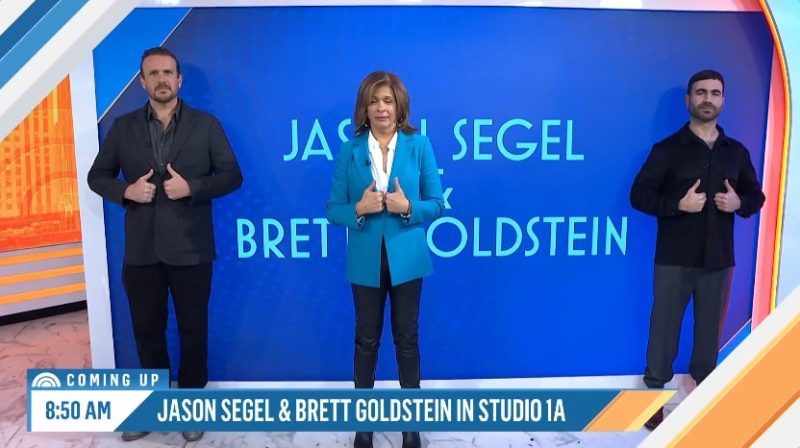 HODA Kotb goofed around with Ted Lasso stars Jason Segel and Brett Goldstein on the set of the Today show.

The Today co-anchor and both actors stood stock still and stared sternly at the camera in a teaser before their interview on Monday.

ABCShe sat stock still and stared ahead in silence, before admitting that the actors ‘made her do it’[/caption]

Jason, Hoda and Brett spaced themselves an equal distance apart in the studio and stood with their thumbs up.

The trio stared straight ahead in silence, before Hoda broke and burst out laughing.

She pointed to her guests and explained: “They’re making me do this!

“I wanted to say some words but these guys are with me.”

Hoda, 58, then revealed that she’d be chatting to Jason and Brett about their new Apple TV+ show, Shrinking.

The playful segment comes after Hoda called out her co-host Jenna Bush Hager for having “nothing on” in Thursday’s episode of Hoda & Jenna.

She joked that Jenna couldn’t take part in a live fitness segment with Peloton trainer Ally Love because she was wearing a tiny mini dress.

During the segment, Ally discussed “small moves” that could have a big impact on your overall fitness journey.

After Ally finished demonstrating one of the moves, Jenna went to try to perform one on her own.

However, Hoda tried to quietly warn Jenna that she “shouldn’t be doing” the workout because she “had nothing on.”

This incident comes as Hoda has claimed in the past that Jenna, 40, does not wear underwear most days.

The truth, which Savannah Guthrie corroborated, came out during a truth or dare game with Good Housekeeping in March 2022.

She also claimed that Jenna borrows her clothes and re-wears her Spanx.

Last week, Today fans slammed both Hoda and Jenna for a “disgusting” habit that they share with their “intimate partners.”

The women revealed that they would let their partners use their toothbrushes and found nothing wrong with it.

The duo – who have a playful relationship on set – was discussing a story about a man who was outraged after finding out that his wife had been using his toothbrush.

“Sometimes it can be by accident. Maybe you confuse the brushes,” Jenna said.

“Especially on a trip,” Hoda added. “Because you bring one of those travel brushes and you’re like, ‘Is that yours?’”

She went on: “Ok, so this is how we feel about it. We, collectively, think sharing a toothbrush is no big deal.”

Jenna added that she “didn’t care”.