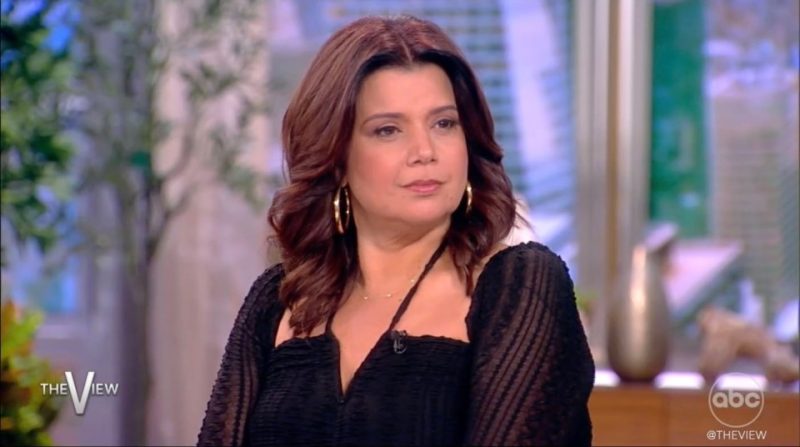 ANA Navarro roared at Kylie Jenner after the reality star wore a controversial accessory to a recent fashion show.

The Kardashians star added a fake cut-off lion’s head to her black strapless dress at the Schiaparelli Haute Couture show.

Kylie wore the shocking outfit as part of the Paris fashion week festivities.

Her dress became the talk of the event, with many offering their approval or condemnation.

Count The View co-host Ana in the “nay” category.

Late on Monday, she shared a photo of Kylie in her dress to her Instagram stories.

The Kardashians star completed her outfit with a black velvet gown and croc-skin bag.

The lion’s head remained on Kylie’s dress as she sat on the front row at the fashion show.

Sharing photos of her outfit on Instagram, the reality star said the lion was “fake” and “art”.

“BEAUTY AND THE BEAST. thank you @danielroseberry  and @schiaparelli for such a special morning,” she captioned a photo of the dress. “Wow I loved wearing this faux art creation constructed by hand using manmade materials. beautiful beautiful.”

But many fans did not find it quite as beautiful, with several slams that her outfit as “cruel” and “twisted.”

“I know it’s a fake lion head but it’s jarring,” one person commented in a Reddit chat room.

“This made me so sad. It’s giving cruella de vil animal hater,” another person added. “It’s a bit cruel to wear a lion head like some trophy.”

But while Ana may be one of the highest profile haters, the host has had her share of fashion faux pas as well.

Just last week she confessed to a mix-up involving her earrings that made it live on the air.

“So, Fran Taylor, the styling guru here at The View, says I was wearing the earrings wrong…,” the host told her followers from backstage.

She then tucked her dark hair behind her ears to showcase the gold-dangled earrings – one designed to look like the letter N and the other an A.

“She showed me this one, and she said they were from (the Netflix series) Emily and Paris, and I said, ‘Oh, the Eiffel Tower,’ but no, it’s an A,” Ana joked about her confusion while pointing the camera at the earring on her left ear.

“And this is an N,” the 51-year-old detailed the other earring on her right ear.

She then admitted her mistake and hilariously mocked her own blunder of wearing the earrings out of order.

“And apparently, I wore them backward. Maybe it means not available. No say. Not Ana? I don’t know,” the TV star joked.

“But anyways, thank you, Fran. These are cool.”

The View co-host has had her own wardrobe malfunctions