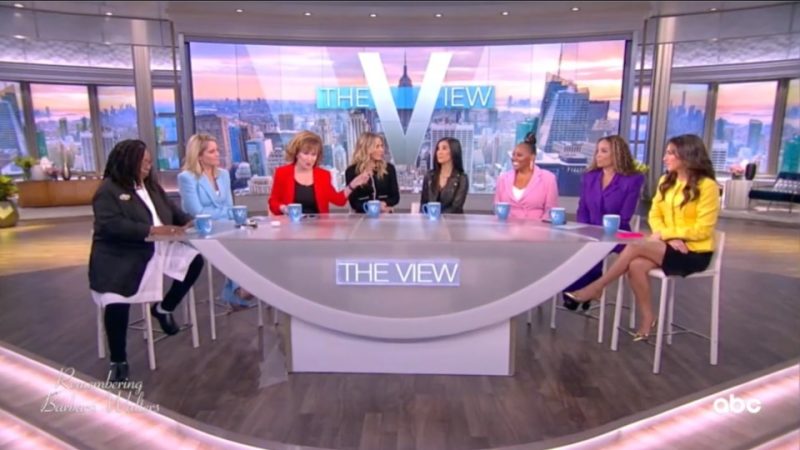 Ana took to her personal Instagram to share a few snaps recently: including with pal Martina Navratilova and one with The View alum Rosie O’Donnell.

The View host Ana Navarro recently shared some snaps of her friends to InstagramABCIn addition to Martina Navratilova, Ana shared a screenshot of The View alum Rosie O’Donnell from a ‘drunk FaceTime’ chatInstagram/ananavarrofl

Ana captioned her post: “Got to hang with my friend, tennis [goat emoji], @martinanavratilova & her wife, @julialemigova, this weekend. Martina has broken so many glass ceilings and records. She’s the personification of grit and grace. The second picture is when we drunk face-timed @rosie, who was in some sort of kiddie pool situation or something, I think.”

The image showed a blurry picture of Rosie’s face while Ana and Martina could be seen in the bottom right of the snapshot.

This chat comes after Rosie missed out on The View’s tribute to Barbara Walters, which took place in early January.

The show held a heartfelt tribute to Barbara, who died aged 93.

Rosie, despite appearing on the show for eight months in 2006, did not make an appearance at the time.

According to Rosie’s representative, the star was simply unable to attend the tribute show.

Recently, Ana admitted she received a new form of Botox while in her hometown of Miami.

Ana, who lives in Miami and commutes to New York for her talk show duties, shared a photo to her Instagram that was straight out of South Beach.

The 51-year-old channeled her inner Elle Woods as she walked down the street in an all-pink silk button-down dress with a thigh-high slit.

The outfit was completed with puffed feathers on her arms.

But what she seemed to be proudest of were her shoes, which she featured in their own photo.

The high heels were completely covered in pink fur.

Ana smiled as she walked down the street walking her tiny dog and carrying a large purse.

She selected the outfit for a special occasion she attended recently with Sara: a drag brunch in Miami Beach.

Ana then joked: “No actual flamingoes were harmed in the making of this outfit.”

In the comments section, one fan comically asked: “Who’s the young chick with the cute puppy?”

Ana replied with the reveal: “Some b***h who had @carloswolfmd inject daxxify.

Daxxify is similar to Botox, but claims to be longer-lasting.

The injectable cosmetic drug was just approved by the FDA at the end of last year.

Earlier this month, Ana made a raunchy joke on social media that left fans laughing their heads off.

The View co-host carried her pet dog, ChaCha, around her arm at the marketplace.

In the snapshots, Ana held up an eggplant and a carrot to show off their sizes.

She also decided to drop a sex joke as she captioned the post: “… Yes. That’s one big! I think the carrot has Peyronie’s disease.”

Peyronie’s disease is a noncancerous condition that develops on the penis and causes curved, painful erections, according to the Mayo Clinic.

In the comments section, fans seemed to be enjoying Anna’s naughty sense of humor.

“Your sense of humor is a fabulous treat! Thank you!” one person said.

Another added: “Anna gets it! So many things could be said, but none of them appropriate!”

A third user mentioned: “Ana, you are hysterical!”