Live’s Ryan Seacrest storms off set as he sarcastically blasts ‘are we interrupting something?’ in uncomfortable moment 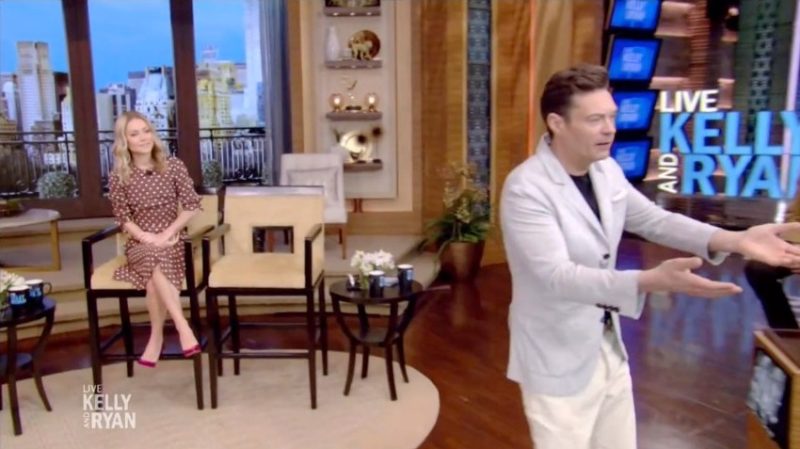 LIVE’s Ryan Seacrest has stormed off set in a dramatic fashion after sarcastically asking crew moment if he and co-host Kelly were ‘interrupting something.’

Live with Kelly and Ryan had just returned from its commercial break when Ryan took note of producer Michael Gelman snacking on something off set.

Live with Kelly and Ryan came back from commercial break when Ryan noticed producer Gelman munching on somethingNBCRyan stormed off set, asking sarcastically if he was ‘interrupting something’ by starting the showNBC

“Excuse me, are we interrupting something here?” Ryan asked a producer off-camera before jumping back into the show.

“He’s having breakfast,” Kelly said as Ryan jumped out of his seat and walked over.

“Would you like a frittata?” Ryan asked Gelman sarcastically.

“No, I’m getting my sugar up,” Gelman replied with a grin.

“Can we get you some bacon?” he continued before walking back over to Kelly.

“Getting his sugar up? He needs his sugar,” Kelly echoed cheerily.

“Alright, let’s go. We’ll do the show while he has brunch,” Ryan muttered as he made his way back to his seat on set.

Earlier this week, Ryan had a surprising moment of his own when he embraced one of his show’s guests during Live with Kelly and Ryan.

On Monday’s broadcast of Live!, Ryan jumped onto and straddled the newest Bachelor Zach Shallcross, 26, during their on-air interview.

Zach mentioned a tradition on The Bachelor while chatting about the show with co-hosts Ryan and Kelly.

The 26-year-old explained that, “in The Bachelor world and [The] Bachelorette world, the hug-jumps are a big deal.”

Following his statement, an excited Kelly declared that she wanted to see Ryan and Zach “demo[nstrate] it.”

A willing Ryan immediately got out of his seat that was beside the 52-year-old and asked the reality star “so what do I do?”

Instructing him, Zach replied: “Kind of like jump and I’ll carry you and then we do this quick little spin [Zach reenacted the spin they were about to do].”

The American Idol host hurried Zach’s explanation, cutting him off to say: “Alright let’s go. Let’s get this over with.”

Gearing Ryan up for his big jump, Zach greeted him as if they were just meeting.

Zach said: “So good to see you Ryan,” right before the smiling ABC personality leaped into his arms, straddled him, and hugged him, holding on as Zach twirled.

This moment earned a loud applause from the audience and a huge grin from a giddy-looking Ryan.

The radio personality posted the part of today’s Live! episode where him and Zach hug-jumped to his personal Instagram page.

Last week on Live, Ryan Seacrest showed off his bare chest to viewers after suffering an awkward wardrobe malfunction live on air.

Ryan and Live co-host Kelly Ripa, back from her hiatus spent recovering from an illness, prepared to introduce the show’s next portion when the wardrobe issue occurred.

Ryan, 48, introduced the next segment: “So Kelly, in today’s show, we continue our ‘Best Me in 2023’ series with Dr. Melina Jampolis and a look at heart-healthy foods.”

Ryan spoke emphatically and moved his arms around while pumping up the audience about the next portion of the show.

While mentioning “heart-healthy foods,” however, he stretched his arms a little too wide, which resulted in an embarrassing on-air gaffe.

A button popped off of the American Idol star’s shirt, revealing a small patch of his bare skin right in the center of his chest.

The audience burst out into laughter while Kelly attempted to predict what kind of “heart-healthy foods” Dr. Jampolis would suggest.

Meanwhile, Ryan tried to cover the hole in his shirt while barely stifling laughs.