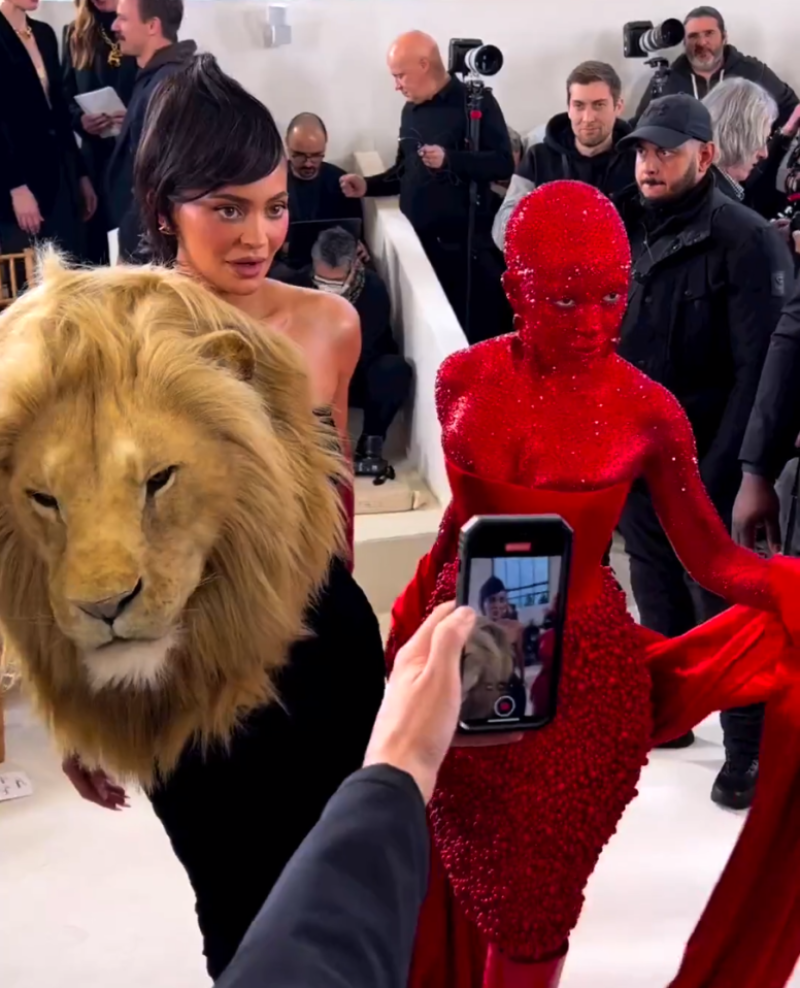 KYLIE Jenner was left seeing red after an encounter with Doja Cat at a fashion show.

Now fans are wondering if there is a brewing feud between the two.

And both dressed to impress.

Kylie, 25, turned heads when she showed up in a tight dress topped with a giant (fake) lion’s head.

But Doja, 27, stole her attention when she appeared covered head to toe in 30,000 bright red Swarovski crystals.

The jewels were hand-applied and covered her face, head and arms, and was apparently the talk of the show.

Out on the red carpet, the two fashion icons passed each other, sharing what looked like an uncomfortable moment.

As each sized up the other’s outfit, both Kylie and Doja exchanged a simple “Good to see you,” to each other, though neither were very convincing.

Fans online openly wondered if there was some hidden meaning behind the encounter.

“Their exchange came off a little awkward. Is it me?” one person noted.

Another added: “The ‘good to see you’ from Doja made me shiver.”

A third asked: “I wanna know what Doja said because Kylie gave her a mean girl look.”

While one person wondered: “Doja look a bit agitated with Kylie. They got beef?”

While there is no formal record of a beef between the two, Kylie could be supporting her sister, Khloe Kardashian, who may be jealous of Doja after the singer was spotted with one of her exes.

Earlier this month, French Montana and Doja fueled romance rumors as they appeared to have taken a romantic getaway to the Bahamas together.

The duo took an Instagram photo at their dinner table.

The two smiled at the camera as their table was covered with plates of pasta and spaghetti.

In the series of snaps, Doja was tagged as she was splashing around in the waters.

While still in the Bahamas, the two music stars then showed up in their swimwear in an Instagram video.

French had a highly publicized romance with Khloe, 37, back in 2014 after she had split from her husband Lamar Odom, 42.

After about eight months of dating, the couple had broken in September 2014.

The pair have since have remained friends and have been spotted at various events together, including at Kanye West’s church service.

The rapper mentioned their friendship on The Wendy Williams Show back in 2016: “We cool. I think we’re always gonna be friends. I’m cool with that whole family. I’ve got nothing but love for them.”