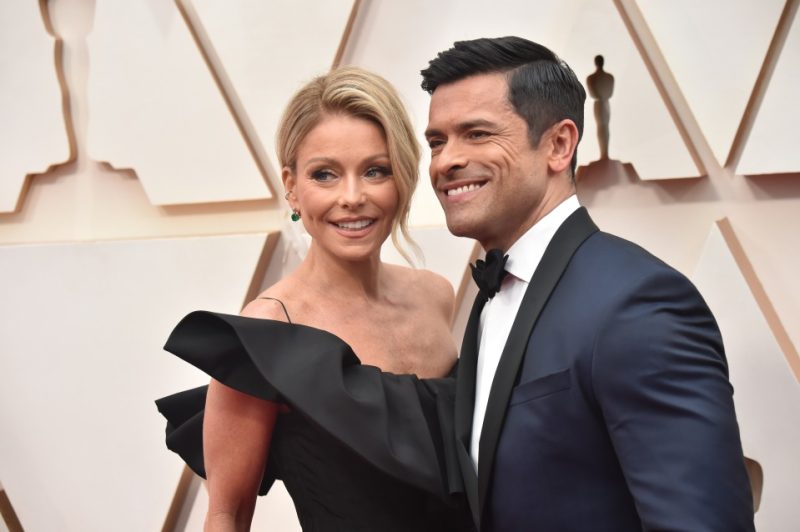 KELLY Ripa has made a cheeky confession about her ‘borderline shameful’ activity with her husband Mark Consuelos.

The 52-year-old was hosting Live with Kelly and Ryan on Monday when she decided to come clean.

Toward the beginning of the show, Ryan Seacrest turned to his co-host and said: “So how was the weekend? You said you and Mark did something cute?”

Kelly replied: “I wouldn’t call it cute, I would call it borderline shameful!” before going on to explain exactly how she and Mark spent their day off.

“We changed from our day pajamas into our evening pajamas at 2pm on a Saturday and spent the day in our pajamas,” she revealed.

Kelly continued: “First of all, that just seems like we’ve given up!” as Ryan and the live audience burst out laughing.

“But he was on one side of the sofa looking for sporting events to DVR while watching, and I sat there knitting!

“And I turned to him and I said, ‘we are 87-years-old, we have gone from middle-age into our retirement selves’, and he looked at me and said, ‘it’s kinda great isn’t it?’” Kelly added.

Ryan responded: “I mean all day in PJs is a fun day!” before adding: “I heard you bragging about the knitting to some of the guests, is it therapeutic for you?”

Calling Ryan out for his comment, Kelly fired back: “I wouldn’t call it bragging…”

Correcting himself, Ryan said: “Well you were announcing it then to some of the guests…”

Kelly then said: “No, I was saying that I have become a knitter and I like it,” as Ryan interjected and asked: “Is it relaxing for you?”

“I wouldn’t say relaxing, I’m terrible at it so it keeps me on my toes!” Kelly replied.

Her comments come after she warned producers that she wants “time off” after viewers worried she was “forced” to work when she was sick.

The Live with Kelly and Ryan star left viewers concerned earlier this month when she co-hosted the show despite being ill and barely able to talk.

Kelly has now returned to the morning show after taking several days off while feeling ill.

While the presenter insisted she was feeling better, she did talk about taking a “sabbatical” during last Tuesday’s episode.

She joked: “At that point I’m hoping to be retired. If I’m still doing, you all have an obligation, ok?”