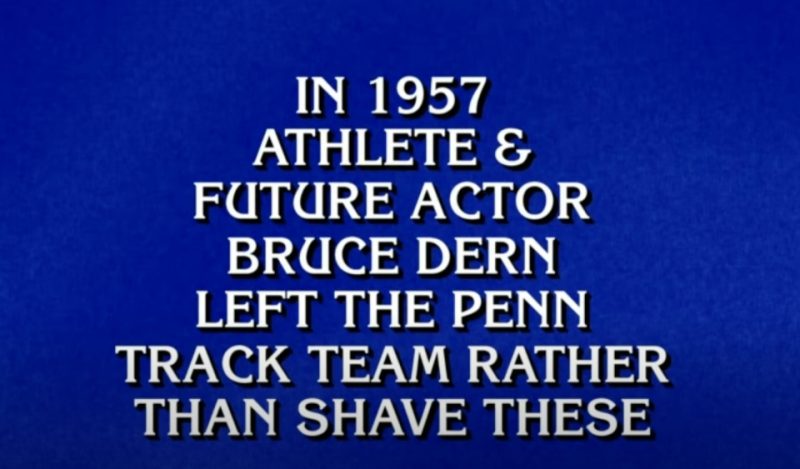 A CONTESTANT on Monday’s Jeopardy! episode made a well-intentioned but uproariously incorrect guess.

ABC/Jeopardy!The contestant buzzed in for this Jeopardy! clue under the category ‘sides’[/caption]

ABC/Jeopardy!Instead of ‘sideburns,’ she guessed former athlete Bruce Dern was required to shave ‘his legs?’[/caption]

Troy, a music executive from Tampa, Florida, won what was his third game with $98K total and is Jeopardy!’s ongoing champion.

The clue under the category “Sides” read: “In 1957 athlete & future actor Bruce dern left the Penn track team rather than leave these.”

Anne buzzed in and guessed “His legs?”

Ken, 48, replied: “No!” and a laughing Troy picked up the baton, correctly getting it as “sideburns” – since all responses had to fall under that theme.

Ken wasn’t done running with the mistake, he added: “I don’t know what Penn state thinks about running with unshaved legs.

“Maybe they’re all for it,” the host continued and he tossed up his hands at the contestants.

Game show fans had a (track and) field day with this one as one Twitter user wrote: “Ken Jennings scoffing at Anne’s shaved legs answer” with a skull emoji.

Another felt for Anne and wrote: “I thought it was legs too. Cyclists do it!”

Though a third argued: “Except the answer had to have ‘side’ in it…or is there something called a side-leg.”

A fourth fan similarly wrote: “Hey, swimmers shave their legs. It’s not unreasonable to think runners might, too!”

Former champ Sam Kavanaugh buzzed in to commiserate: “One of my HS track teammates shaved his legs to see if it could give him an edge. It mostly just gave him pretty significant razor burn.”

A sixth also related: “LOL! That was my answer too!”

A seventh fan accused Ken of being off-base in his clap-back: “He went to Penn!!! It’s right there in the clue!!! Not Penn State!!!”

Recently, a contestant buzzed in with a wrong guess that was simply one for the books.

The category was “Plurals That Don’t End in S,” and the clue read: “Moose.”

Jack Weller responded, “What are meese?”

Ken was astounded and replied: “No!” with an audible laugh, chiding: “No, Jack!”

One fan tweeted: “Mf on Jeopardy just guessed the plural of moose is ‘Meese.’”

Another penned: “y’all should really watch Jeopardy! cuz this guy just buzzed in to say the plural of Moose is Meese.”

“WHAT ARE MEESE OMG,” a third person wrote. “Best wrong answer since ‘What is a hoe?’”

Co-host Mayim Bialik, 47, is expected to return to the game show in late February.

ABCPerhaps more tragically, a contestant recently thought the plural of moose was ‘Meese’[/caption]