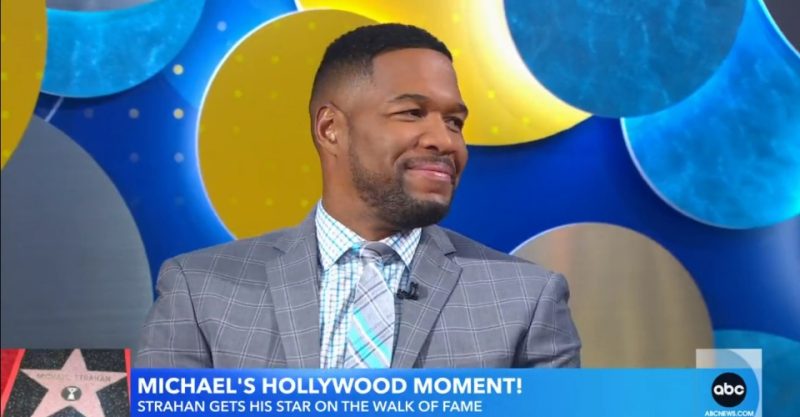 He was absent yesterday as he received a major award in Los Angeles.

ABCMichael Strahan has returned to GMA, just hours after being in Los Angeles to receive a special award[/caption]

AlamyHe was honored with a star on the Walk of Fame, the first in Sports Entertainment[/caption]

On Monday, all three of the main hosts were absent from the anchor desk.

Today, they all returned.

Michael, however, must have taken a red eye flight because he was in Los Angeles just hours before, receiving his star on the Hollywood Walk of Fame.

Typically, Michael is absent from GMA on Mondays, due to hosting NFL Football the night before.

This time, he was still on the opposite side of the country, but managed to make it back in time.

Traveling back and forth for three days, when he usually has a day off, must be taking a toll on the former football player.

However, the host did not seem tired at all and was full of energy as he wore a big smile and was very animated.

Michael was all smiles as well as he unveiled his star on the Hollywood Walk of Fame Monday morning.

And the Good Morning America host shared the moment with a special date – his mom.

Michael, 51, looked sharp in a navy blue suit as he accepted the honor.

His friend, America’s Got Talent host Terry Crews, introduced the former football star, while his ABC co-host Robin Roberts was also on hand for the celebration.

Robin was also in California to report on the deadly shooting at a dance club in Monterey Park.

Michael started his speech with a special shout-out to his mom, who was also on hand, mentioning her birthday, which was last week.

Then the happy host let his guard down during his acceptance speech, shouting out to the gathered crowd: “It’s Michael Strahan Day, baby!”

He nearly forgot to mention his GMA crew, coming back to the podium after his speech to acknowledge them.

“How could I forget my queen, Robin Roberts? And George Stephanopoulos,” he added. “I love you, Robin. You came all the way out here. Now, I’ve gotta buy you a nicer Christmas gift.”

Walk of Fame producer Ana Martinez released a statement before the event saying: “We are very excited to inaugurate the first Sports Entertainment star for Michael Strahan.

“Sports fans will be thrilled to be able to see their favorite sports figures who are involved in the entertainment business receive their stars.

He received the first star in the Sports Entertainment category.

Aside from hosting GMA, Michael still is involved in the world of football, as he is a commentator for FOX NFL Sundays.

This past weekend, Saturday Night Live had a skit where they spoofed Michael and a bunch of the hosts.

SNL fans said they were not impressed by the impressions of Michael and Terry Bradshaw.

They were joined by comedians impersonating Curt Menafee, Jimmy Johnson, and Howie Long.

The late-night show opened with a six-minute comedy skit on the Fox NFL crew that left a bad taste.

Michael was played by Devon Walker in the clip while Terry was impersonated by Molly Kearney.

Devon poked fun at Michael’s lisp as he spoke during the sketch.

Some fans on social media said they missed the mark with the impressions.

One fan wrote: “This is more Mike Tyson than Michael Strahan.”

And another tweeted: “SNL is my favorite show but the Strahan impersonation missed badly.”

And fans also weren’t keen on the Terry impression.

One wrote: “Sorry this cold opening would’ve been great if someone else played Terry Bradshaw.”

ABCAll three hosts returned on Tuesday, after being out the day before[/caption]

ABCDespite the quick traveling back and forth, Michael appeared on the show with a smile on his face and had a lot of energy[/caption]