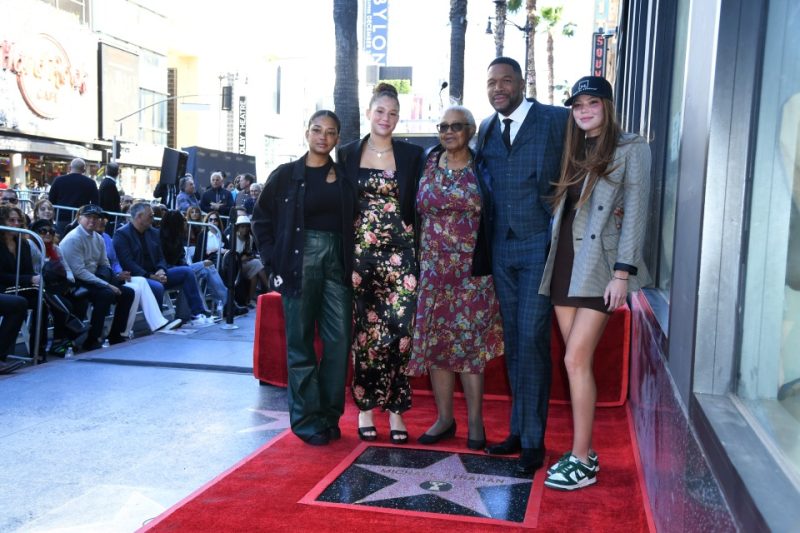 She showed up to her father’s Walk of Fame ceremony with her twin sisters, Isabella and Sophia, 18.

InstagramTanita is an artist, who tends to stay out of the spotlight[/caption]

Tanita, 31, posed in a few photos during Monday’s ceremony.

The artist stood next to Michael, her sisters, Isabella and Sophia, and their grandmother, in front of the GMA host’s star.

Another featured Michael with just his daughters.

He is the first ever person to get a star for Sports Entertainment.

Aside from GMA, Michael is also an analyst on FOX NFL Sunday and was a football player for the New York Giants.

Tanita sells her artwork online and tends to stay out of the spotlight.

His reclusive daughter is also the sister to Michael Jr.

Their mother is Wanda Hutchins, whom Michael was married to from 1992 to 1996.

She reposted the video of her and her family posing behind the star, as well as a photo of her father kneeling behind it as well to her Instagram stories, but that was the only acknowledgement of the event.

Back in November, Michael left fans swooning after sharing a sweet throwback to mark his first-born daughter’s milestone birthday.

He lovingly told the world how proud he is of his eldest child and her achievements in life alongside a childhood snap.

The doting dad gazed at his newborn daughter as she grinned in an adorable red romper suit.

He accompanied the nostalgic image with a recent selfie of the pair, showing off their resemblance as they both beamed at the camera.

Michael wrote in the caption: “Happy birthday to my firstborn @tanitaa.st.

“Please help me wish her the most amazing day. So proud of the person and artist you have become my baby. Proud to be your Dad.”

Thousands of fans and some of his TV pals joined in with the birthday wishes in the comment section.

One social media user wrote: “She is so beautiful. I know you are very proud of her.”

Another added: “You look like a sweet, intelligent, and creative person. Having a great dad helps more than you know!”

Tanita was born in Germany before moving to Los Angeles, where she graduated from the Fashion Institute of Design and Merchandising.

The 31-year-old has since gone on to become a visual artist, specializing in colorful portraits and digital pieces.

Michael was all smiles as well as he unveiled his star on the Hollywood Walk of Fame Monday morning.

And the Good Morning America host shared the moment with a special date – his mom.

Michael, 51, looked sharp in a navy blue suit as he accepted the honor.

His friend, America’s Got Talent host Terry Crews, introduced the former football star, while his ABC co-host Robin Roberts was also on hand for the celebration.

Robin was also in California to report on the deadly shooting at a dance club in Monterey Park.

Michael started his speech with a special shout-out to his mom, who was also on hand, mentioning her birthday, which was last week.

Then the happy host let his guard down during his acceptance speech, shouting out to the gathered crowd: “It’s Michael Strahan Day, baby!”

He nearly forgot to mention his GMA crew, coming back to the podium after his speech to acknowledge them.

“How could I forget my queen, Robin Roberts? And George Stephanopoulos,” he added. “I love you, Robin. You came all the way out here. Now, I’ve gotta buy you a nicer Christmas gift.”

Walk of Fame producer Ana Martinez released a statement before the event saying: “We are very excited to inaugurate the first Sports Entertainment star for Michael Strahan.

“Sports fans will be thrilled to be able to see their favorite sports figures who are involved in the entertainment business receive their stars.

InstagramTanita is also the sister to Michael Jr, who is rarely seen[/caption]

PrevPreviousKelly Ripa shames husband Mark Consuelos as she reveals his jaw-dropping comments while she prepared to give birth
NextKim Kardashian goes braless and pops out of tiny white tank as she shows off real, makeup-free skin in unedited TikTokNext