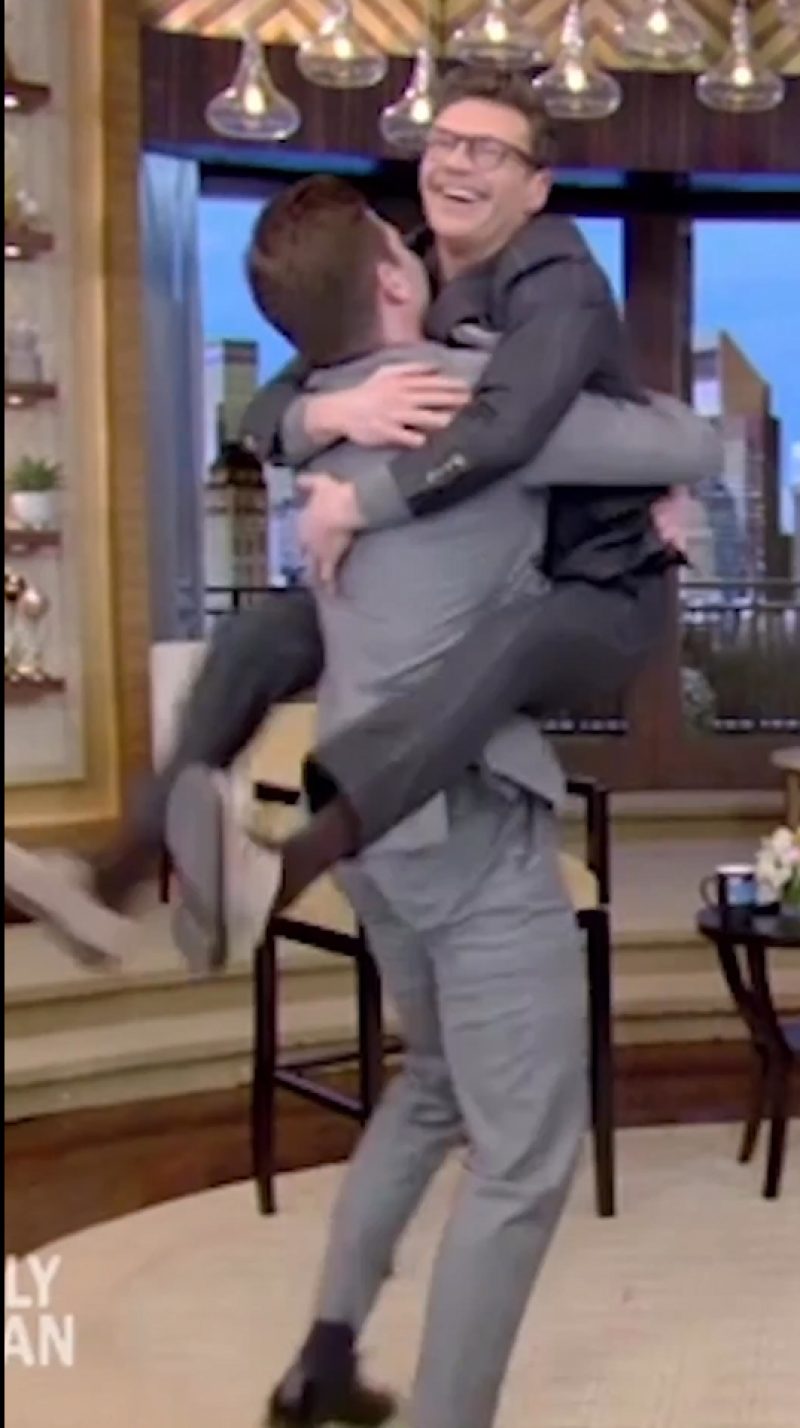 RYAN Seacrest has begged fans “not to tell HR” after he hops into a guest’s arms during Live! with Kelly and Ryan.

On Monday’s broadcast of Live!, morning show host Ryan, 48, jumped onto and straddled the newest Bachelor Zach Shallcross, 26, during their on-air interview.

While appearing on the show, Zach revealed a particular tradition that exists on the reality series, The Bachelor, to hosts Ryan and Kelly Ripa, 52.

The 26-year-old explained that, ” in The Bachelor world and [The] Bachelorette world, the hug-jumps are a big deal.”

Following his statement, an excited Kelly declared that she wanted to see Ryan and Zach “demo[nstrate] it.”

A willing Ryan immediately got out of his seat that was beside the 52-year-old and asked the reality star “so what do I do?”

Instructing him, Zach replied: “Kind of like jump and I’ll carry you and then we do this quick little spin [Zach reenacted the spin they were about to do].”

The ex-American Idol host hurried Zach’s explanation, cutting him off to say: “Alright let’s go. Let’s get this over with.”

Gearing Ryan up for his big jump, Zach greeted him as if they were just meeting.

Zach said, “so good to see you Ryan,” right before the smiling ABC personality leaped into his arms, straddled him and hugged him, holding on as Zach twirled.

This moment earned a loud applause from the audience and a huge grin from a giddy-looking Ryan.

The radio personality posted the part of today’s Live! episode where him and Zach hug-jumped to his personal Instagram page.

‘SUCH A GOOD SPORT’

Many fans took delight in seeing Ryan demonstrate the iconic hug-jump from The Bachelor and The Bachelorette series.

One fan complimented: “Ryan! You’re absolutely the best! Such a good sport with everything! It’s no wonder why you are loved so much.”

A fourth lauded: “I won’t even admit how many times I went back and watched this haha! I love Ryan and how he is always up for anything! This was my favorite part of the show and definitely puts Ry in the running for an award.”

NOT GREER FOR IT

A fifth admitted: “That was hysterical but on the real show it gets annoying!”

Grammy-winning singer Harry Connick Jr., 55, commented, “PTSD [Post-Traumatic Stress Disorder],” to which Ryan replied: “[laugh emoji] nobody was harmed in the making of this hug jump.”