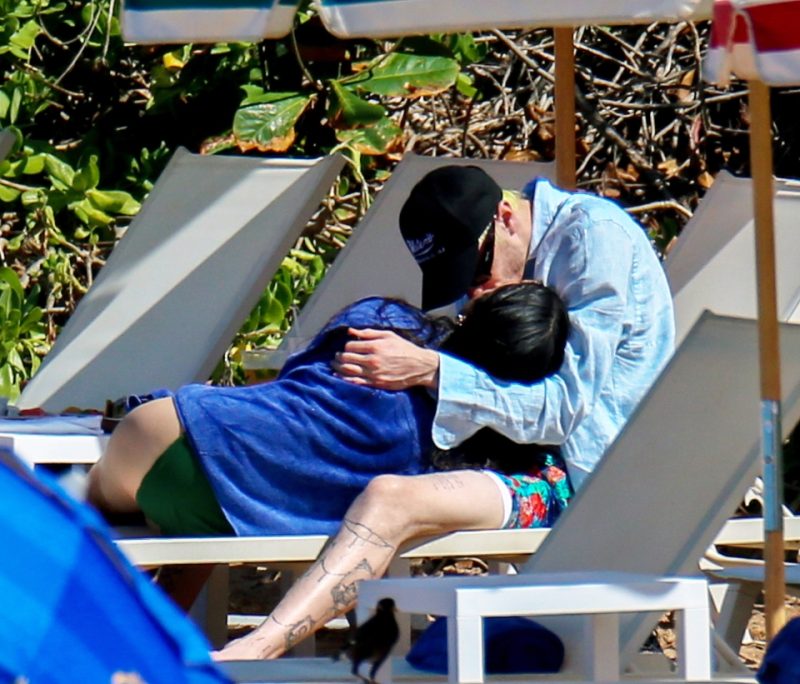 PETE Davidson has continued his whirlwind romance with Chase Sui Wonders by whisking her off to Hawaii.

Meanwhile, fans may have made a startling discovery about his tattooed body.

BackGridPete Davidson and Chase Sui Wonders pack on the PDA on Hawaiian Vacation.[/caption]

Pete, 29, showed off his multiple tattoos in a pair of multicolored trunks, while Chase showed off her fit physique in a green bikini.

But as the two splashed in the ocean, some fans noticed something was missing.

“It looks like all of the tattoos that Pete got relating to Kim (Kardashian) are gone,” one person shared in a Reddit chat room.

Another added: “Still blows my mind that an adult would brand their body with someone else’s name.”

Several people wondered: “How did he remove the branding? Isn’t it supposed to be permanent?”

While one person speculated: “He will get new tattoos for his new gf, then remove them, again.”

Pete got several new tattoos dedicated to Kim over the course of their relationship, including a shocking neck tat that featured all four of the reality star’s children.

In an interview with Ellen DeGeneres while they were still dating, Kim clarified that Pete’s chest design wasn’t actually a tattoo, sharing: “It’s actually a branding.”

The SKIMS founder further explained: “He wanted to do something that was really different.

“For the first tattoo he got, I was like, ‘Oh, so cute! Thank you! Oh my god!’ You know, second whatever. I’m like, ‘That’s so cute.’ But like that’s what tattoo people do, right? Like they get tattoos of what’s going on in their life.”

“I think my favorite one, it says here, ‘My girl is a lawyer,’” she added while pointing to her collarbone. “And that one’s really cute.”

Kim had previously failed the bar exam numerous times before finally passing the test in December 2021.

She told Ellen of the ink: “I think he was like, ‘I want something that’s there that I can’t, you know, get rid of my tattoos,’ because he’s in the process of getting rid of his arm tats and his neck tats.

Pete and Chase have been a lot more open about their budding relationship lately.

Last week, the two were caught smooching as they enjoyed a day out together at Universal Studios in California.

The pair were seen walking through the theme park arm-in-arm.

At one point, Chase smiled up at Pete, who towered over her.

He appeared in good spirits, smiling throughout the day.

Pete and his latest love interest were also seen sharing a few kisses as they rode down an escalator together.

After attending the Rangers game on December 15, 2022, they were spotted at a Whole Foods in Brooklyn hiding their faces with hoodies and jackets.

Although Pete’s rep denied their romance to TMZ, Pete and Chase were seen near the actor’s apartment.

By early January 2023, they were seen cuddling while waiting for a food order, and again later in the week enjoying a date night together in New York City.

The U.S. Sun exclusively revealed that the actors have been seen by their local Brooklyn neighbors, as the comedian has recently moved to his new private 4,5000 square-foot penthouse in Dumbo.

Local vendors commented that Pete was friendly as a regular customer, even adding that sometimes he went shopping “with his girl,” referring to Chase.