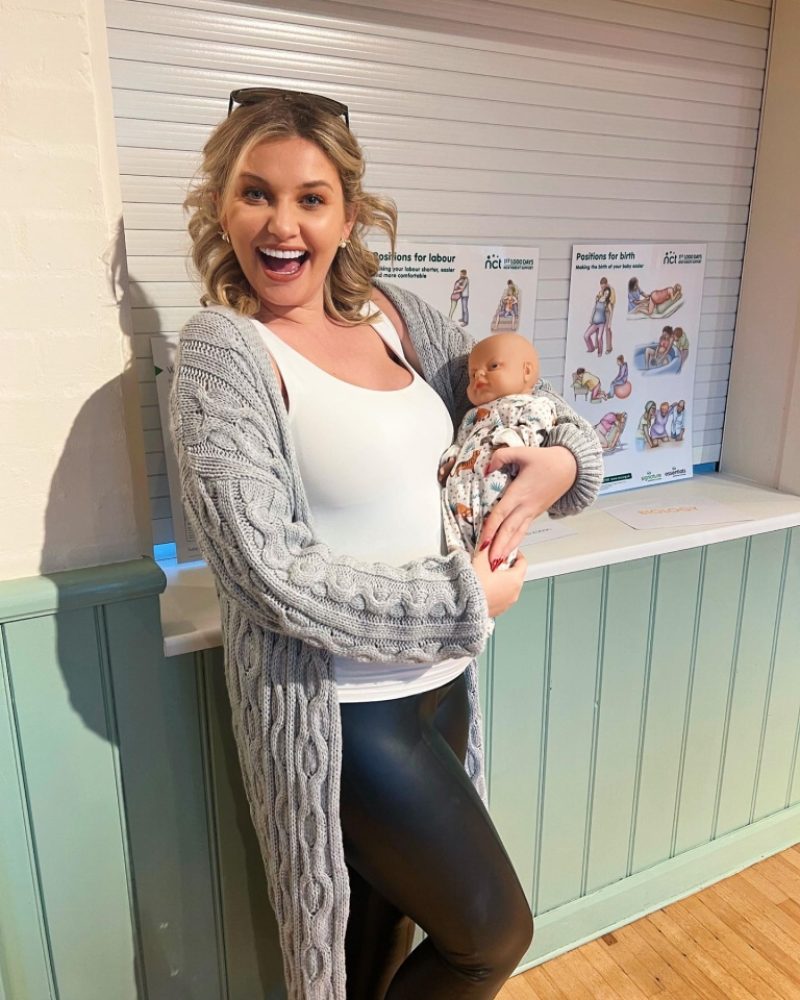 LOVE Island’s Amy Hart got fans all excited ahead of the birth of her first child, after posing with a baby doll that briefly tricked fans.

The reality star and TV host, who is due to give birth in a matter of weeks, beamed as she cradled the doll at an NCT class – an ante-natal class to prepare her to become a mum.

Looking glam but comfy in leather leggings, a white tank top and a grey jumper, Amy revealed she was pulling double duty by fitting in the class in between recordings for the Love Island podcast, The Morning After.

The class helps her in labour and in the first stages of parenting, and it’s clear it proved to be useful for her as she spoke about the benefits of attending.

“When you’ve got NCT at 11 and the Love Island Podcast at 10 ,” she wrote next to the photo. “Now…to NCT or not to NCT, that is the question. As I said the other week, we booked it by accident after someone on here said the NHS classes weren’t free anymore so I thought I was booking the NHS one. (Side note: check your local trust, at the NHS trust I’m under, we have a free half day session available.)

“Anyway, I’m so glad I booked it as we’ve had the best time on the course. It’s 15 hours of class time with other couples who are all due around the same time as you.

“Sam hasn’t really had much experience of babies whereas I consider myself to have a good knowledge and experience but we both learned so so much and our course leader was fantastic.”

“The other couples are lovely and we’re looking forward to our reunion in April.”

She also went into detail about what the class covered, including breast feeding, combi feeding and pumping, plus dealing with pain relief. It also deals with the mental strain it could take on a relationship and how to cope with it together.

Amy then called out those who had mum-shamed her for attending the classes, believing them to be “toxic” and told them not to be so negative.

“1) why would you message that to someone who’s literally in the car on their way to their first session? We were gonna go regardless, why add negativity in to the mix?!

“2) honestly I’d say to anyone debating whether to sign up but having negative thoughts because of comments from friends and family, go and make you’re own judgement! I’m just sad we won’t get to do it again next time.”

The reality TV star – who rose to fame on the ITV2 dating show Love Island in 2019 – took to the Loose Women panel to make the exciting announcement.

She revealed that she had fallen pregnant naturally after worrying about struggling to conceive and freezing her eggs.

She is due within the next two months.