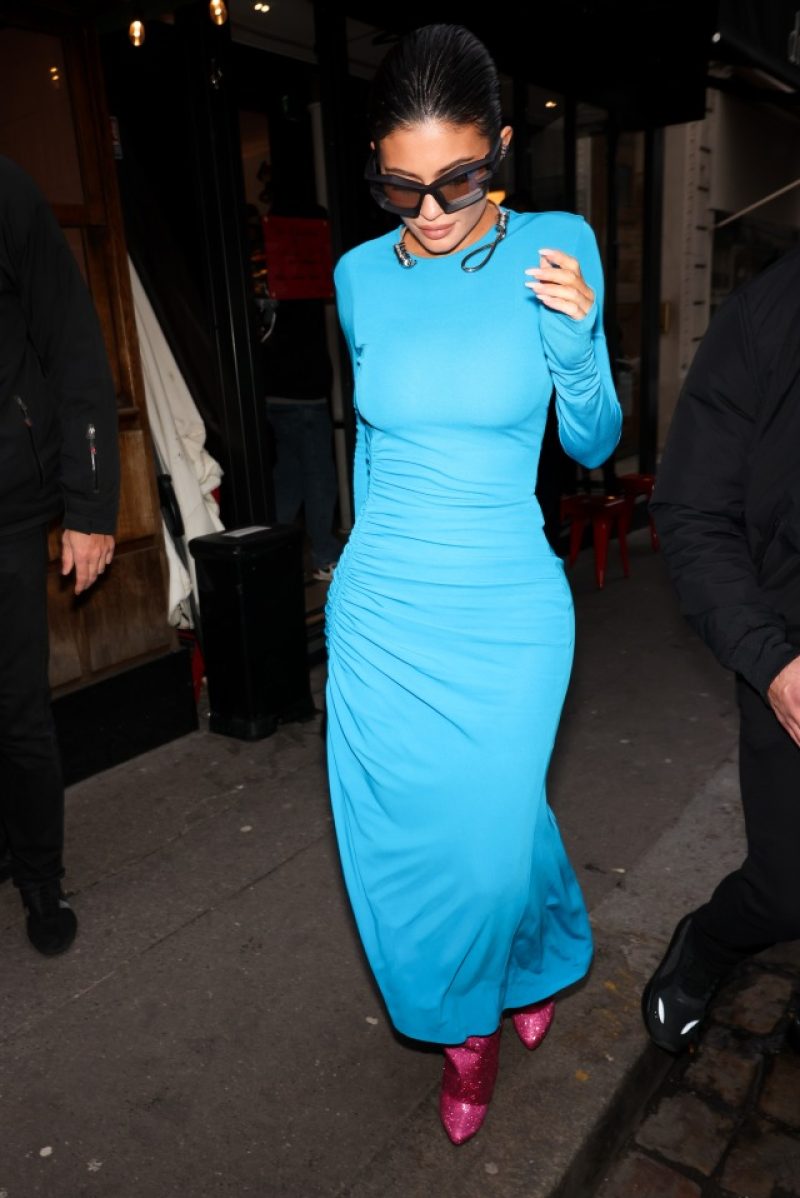 KYLIE Jenner has shown off her tiny waist in unedited new photos from Paris Fashion Week.

The reality star has been abroad serving up a variety of looks during her stay, including wearing a beautiful tight-fitted blue gown.

She accessorized the look with a silver choker necklace and sunglasses.

Her long black hair was tied back in a simple bun.

The Kardashians star was spotted out arriving for lunch at Dinand by Ferdi’s restaurant in Paris.

Kylie has had a busy weekend abroad so far, taking in several fashion shows and creating fashion headlines herself.

Fans, however, were not too keen on one of Kylie’s looks and was slammed for posing with a huge lion’s head at a runway show.

She also wore gold-tipped shoes, in the shape of toes.

Kylie completed her outfit with a black velvet gown and croc-skin bag.

Sharing photos of her outfit on Instagram, the reality star said the lion was “fake” and “art”.

“BEAUTY AND THE BEAST. thank you @danielroseberry  and @schiaparelli for such a special morning.

One wrote on Reddit: “I feel sick at the thought this lion head is real.”

Another posted: “Damn she pulled such a look yesterday and then this trash.”

A third wrote: “This is actually twisted.”

Fans had a different reaction to a blue ensemble the KUTWK alum wore the day before.

An Instagram video showed Kylie ambling down the floor-level catwalk amid a crowd of seated spectators.

The Keeping Up With the Kardashians alum turned heads in while wearing the pastel-blue silk dress designed by the “iconoclastic, avant-garde fashion house.”

The dress was paired with a transparent ruffled shawl, that did little to obscure the makeup mogul’s long legs in the short babydoll dress.

‘GET DRESSED WITH ME’

While seemingly channeling her inner Madonna, the reality star leaned over towards the camera showing her ample breasts and cupping them underneath the pointy bra.

The LA native appeared to be either in a fitting room or backstage at a fashion show, as a rail of clothes could be seen behind her.

COMING UP FOR AIRE

Aside from Paris Fashion Week, it has been a busy weekend for Kylie who made headlines when she finally revealed that her baby son’s name is Aire and showed his face.

The Hulu star kept his name a secret for 11 months.

She shared several photos of her and Aire’s cute home life on Instagram.

One showed him smiling on the sofa wearing a beanie hat, while another pictured him sitting in a high chair.

Another snap saw Kylie cuddling with her baby on the floor while he was dressed in a white T-shirt and blue jeans.

Kylie and the rapper, 31, are also mom and dad to a four-year-old daughter, Stormi.

News broke on January 7 that the pair had gone their separate ways after spending the holidays apart.

PrevPreviousKylie Jenner fans think she’s found a new boyfriend as she cozies up to hunky actor after split from Travis Scott
NextHollywood A-lister unrecognisable as they film new blockbuster – can you guess who it is?Next