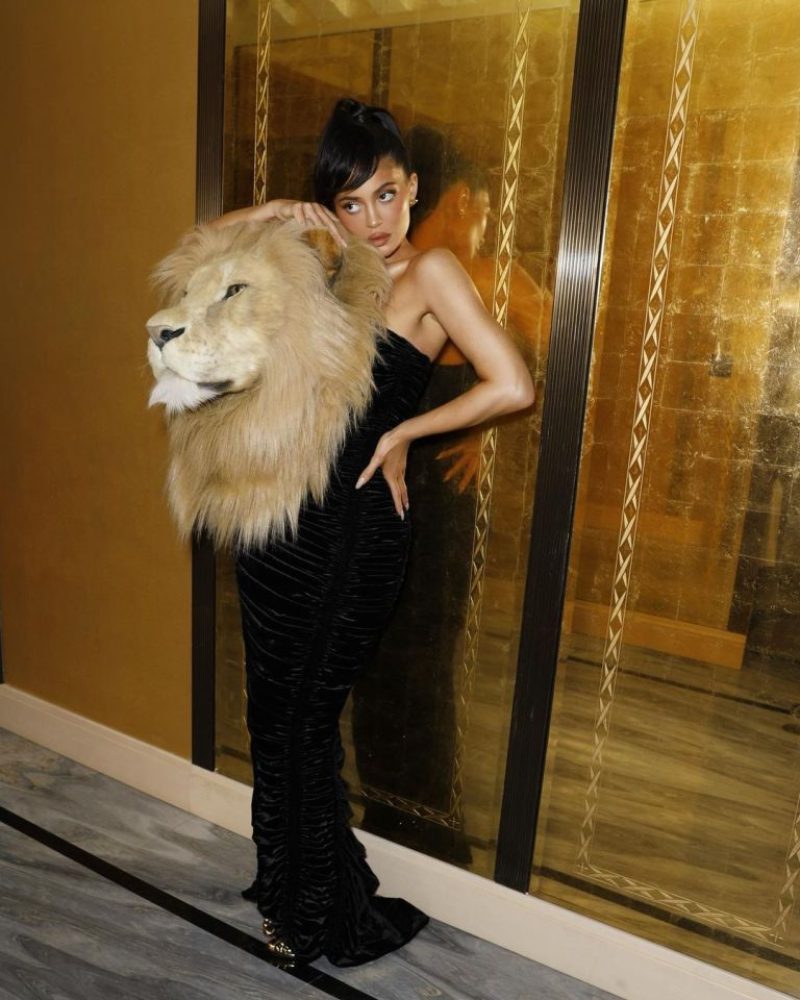 After backlash from critics, Kylie, 25, clapped back after she was slammed as “disgusting” and “grim.”

The Kardashians star had a fake cut-off lion head attached to her black strapless dress at the Schiaparelli Haute Couture show.

Kylie completed her outfit with a black velvet gown, gold-toed shoes, and a croc-skin bag.

In new Instagram photos of the gown in question, Kylie wrote in the caption: “BEAUTY AND THE BEAST.

Of the 35k comments on her Instagram photos, most followers slammed Kylie for missing the mark.

Kardashian critics also had a heyday on a popular Reddit page following the famous family, with one person writing: “I know it’s a fake lion head but it’s jarring.”

“this made me so sad. it’s giving cruella de vil animal hater. i’m not a tree hugging vegan but how can you look at this and not be reminded of a beheaded lion? it’s a bit cruel to wear a lion head like some trophy,” wrote another.

One criticized: “I don’t like this. I know it’s a fake, but still. Using animals purely for fashion is just wrong. It has Jungle Book vibe, the colonial “White man rules the world” vibe. Using beautiful creatures for vanity. Bleh.”

One Redditor tried to offer some positivity, writing: “All of the Schiaparelli heads are man-made. They are hand sculpted, the process is actually very impressive!”

But most were not having it, with another writing: “She’s disgusting for doing this. I mean, what does this say to you? Seriously. Come on.”

THE LION… AND THE WARDROBE

Aside from her lion mishap, Kylie has been mostly praised for serving up a variety of looks during her time at Paris Fashion Week, including wearing a beautiful tight-fitted blue gown.

The reality star showed off her super skinny waistline and famous derriere while wearing an aqua-blue-colored, floor-length dress, and pink sparkly boots.

She accessorized the look with a silver choker necklace and sunglasses.

Her long black hair was tied back in a simple bun.

The Kardashians star was spotted arriving for lunch at Dinand by Ferdi’s restaurant in Paris.

An Instagram video showed Kylie ambling down the floor-level catwalk amid a crowd of seated spectators.

She turned heads while wearing the pastel-blue silk dress designed by the “iconoclastic, avant-garde fashion house.”

The dress was paired with a transparent ruffled shawl that did little to obscure the make-up mogul’s long legs in the short babydoll dress.

While seemingly channeling her inner Madonna, the reality star leaned over towards the camera showing her ample breasts and cupping them underneath the pointy bra.

The L.A. native appeared to be either in a fitting room or backstage at a fashion show, as a rail of clothes could be seen behind her.

‘AIRE’ TO THE EMPIRE

Her wild looks come as Kylie casually dropped photos of her nearly one-year-old son on Instagram this weekend and finally revealed his name.

The reality TV star welcomed her second child with the rapper back in February but kept him off of social media until now.

However, the post comes just weeks after Kylie and baby daddy Travis reportedly broke up.

“Kylie and Travis are off again. They were supposed to spend the holidays together, but she went to Aspen to be with her family and friends up there,” an insider claimed to Us Weekly.

The source continued: “This has happened so many times before. They’re known to be on again and off again, but always remain friends and great co-parents.”

GettyKylie has been attending several shows during Paris Fashion Week[/caption]

GettyKylie and Travis Scott broke up shortly before the holidays[/caption]