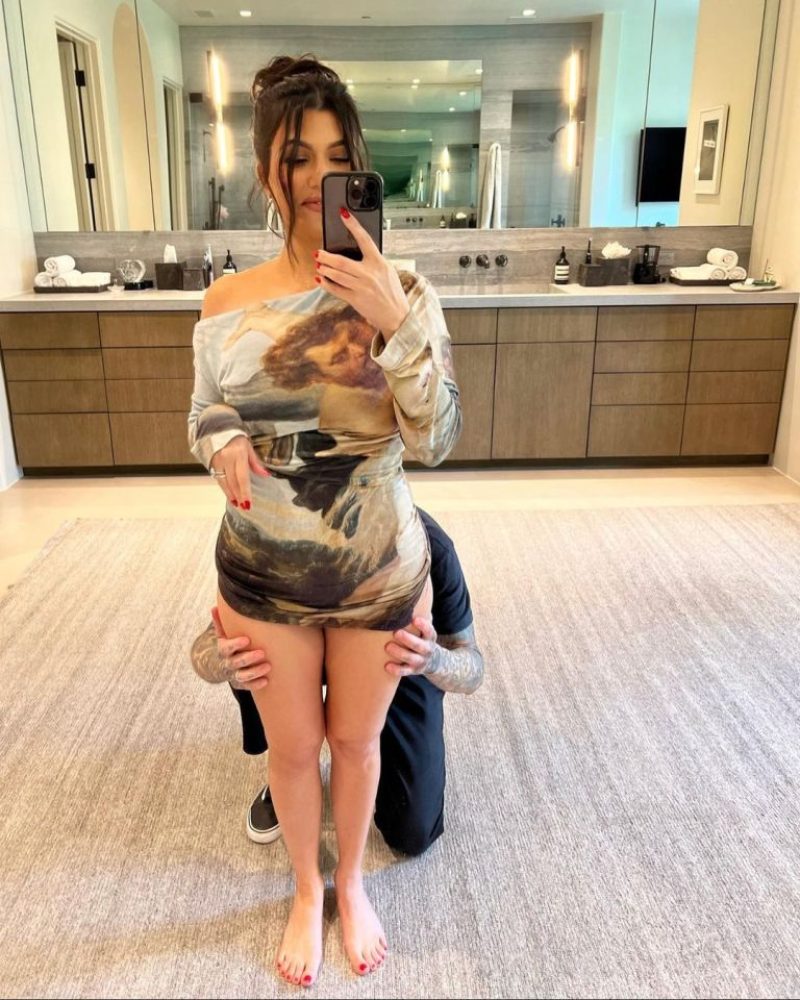 KOURTNEY Kardashian has shown off her real thighs while posing in a minidress with her husband Travis Barker.

The 43-year-old’s fans praised her “amazing” curves in a new bathroom selfie with her rocker partner.

Kourtney showed off her toned legs while posing in a thigh-grazing printed dress.

The reality star’s husband Travis hid behind her in the cute post, which he shared on Instagram on Sunday.

Kourtney’s fans praised her figure, with one writing on Reddit: “Kourtney looks great here too.”

Another agreed, “Awkwardness aside she looks SO GOOD here!!!” and a third posted: “Kourt’s body currently looks amazing.”

Also in the post, Travis showed off his new tattoo dedicated to Kourtney – her eyes inked on his thigh.

Meanwhile, the couple was ripped last week for their “entitled” behavior while leaving a restaurant in LA.

They came under fire for taking their full glasses of wine with them to their car.

One critic wrote on an online thread: “Did they seriously walk out of a restaurant with wine glasses… This is giving messy and entitled to the max.”

While Kourtney and Travis were slammed for their “entitled” behavior, the Poosh founder has recently been showing off her more down-to-earth side.

Last week she packed a humble home-cooked lunch for Travis.

She packed Travis a couple of taco shells with lettuce, meat, and cheese wrapped in tinfoil for his long day away from home.

He reposted the sweet meal on his Instagram and wrote: “My wife is the best.”

While Kourtney is keeping things simple in the kitchen, Kim was ripped for her over-the-top customized menu and private chef for her Air Kim birthday bash in October.

At the time, a drink named “A Billionaire’s Beverage” was listed on the menu and consisted of Vodka, Curacao Blue, and pineapple juice.

Kylie also has a private chef called Chef K, who recently shared what she cooks for the beauty mogul on TikTok.