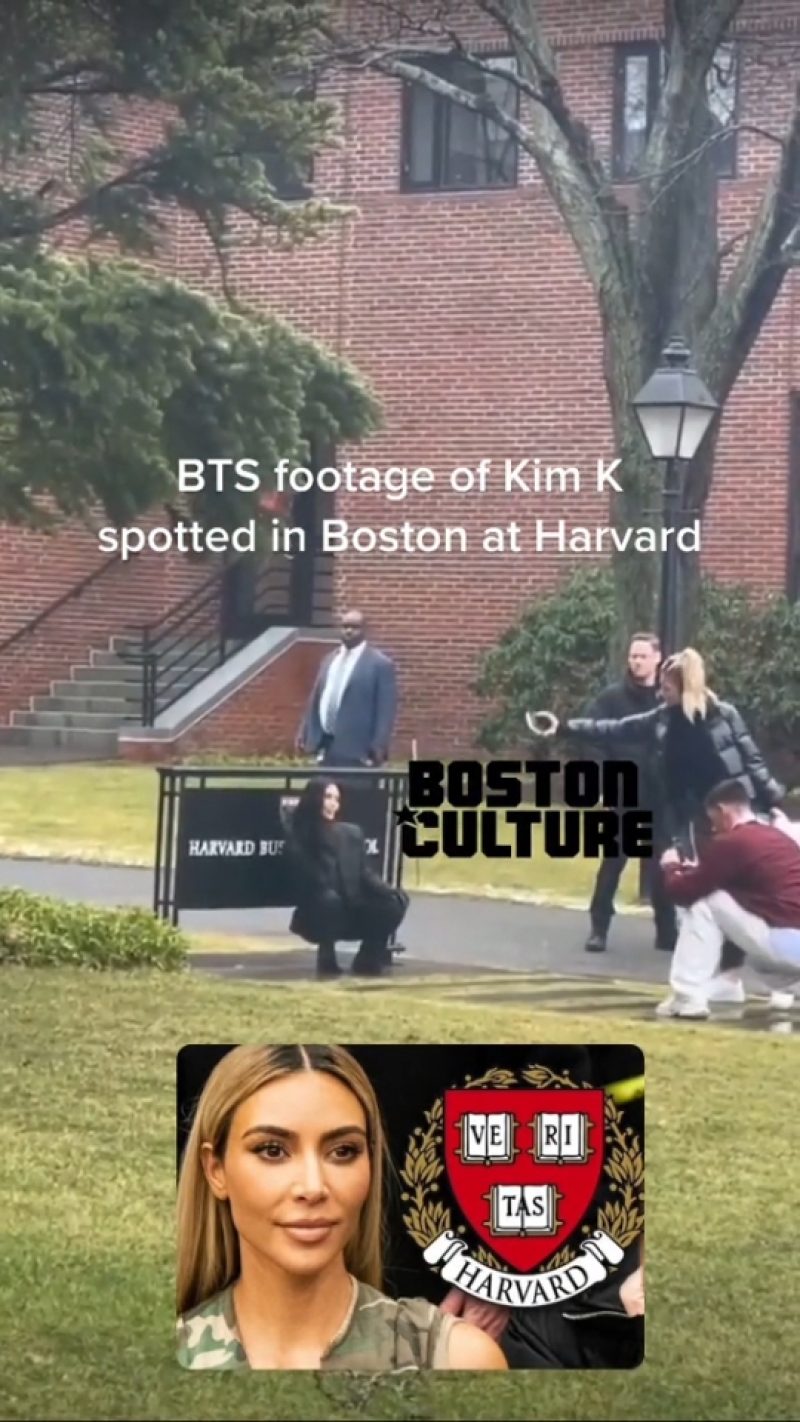 KARDASHIAN critics have mocked Kim after an eyewitness posted a TikTok of the reality star pretending to take candid pictures during her Harvard University visit.

In the video, Kim kneels down next to a sign that has the Harvard Business School logo on it.

While Kim makes a duckface and throws peace signs up in the air, her two bodyguards stand a few paces away, alongside a blonde assistant who holds up a miniature light aimed at the reality star’s face.

A man taking a photo for her stops what he is doing and briefly fixes Kim’s hair, before running back to his spot to take more photos.

The video was captioned: “BTS footage of Kim K spotted in Boston at Harvard,” with one critic writing in the comments, “Why does she never choose to be mature and classy?”

“She has no idea how the real world works,” scathed another.

Another wrote: “Should never have been allowed on that property.”

The video was also picked up and shared to a popular Kardashian Reddit page where critics tore the mom-of-four apart for her “cringe” display.

“Takes a lot of effort to look effortless haha,” wrote one Redditor.

“How embarrassing,” wrote another.

Kim posted the fully edited photos to Instagram to give her fans the low down on her recent trip to Harvard Business School, where she gave a talk to students.

The billionaire shared her story of success with Skims at the Ivy League institution.

She took a photo of the newly unveiled Dr. Martin Luther King Jr. The Embrace statue, located in Boston Common, and snapped a photo outside of Harvard Business School.

The SKKN mogul was spotted leaving the prestigious school after speaking with students for nearly two hours.

NBC10 Boston’s Eli Rosenberg took to Twitter to share footage of the star walking out of a school building flanked by an entourage.

He wrote in his tweet: “Students say they learned a ton.”

In another tweet, Eli revealed that Kim spoke to a class on direct-to-consumer businesses.

The Hulu star posted a series of photos with her 341 million followers to show off her business attire for the appearance.

“Jesus, could you imagine getting into the most prestigious school ever and them bringing in Kim Kardashian to talk to you,” wrote one critic online.

But another pointed out: “She’s a businesswoman guys.”

The Keeping Up With the Kardashians alum has turned her reality career into a business empire in recent years.

Her 35% stake in Skims helped her achieve billionaire status in April 2021.

Kim has evolved into quite the mogul as of late.

In addition to her job as a reality star, Kim owns Skims and SKKN.

The star also uses her fortune to invest in worthwhile ventures and pieces.

She recently spent roughly $200,000 on an Attallah Cross pendant worn by the late Princess Diana on various occasions.

In addition to being a veritable businesswoman, Kim has been working toward becoming a lawyer.

In December 2021, the star revealed that she passed the baby bar exam after failing it three different times.

The “baby bar” – also known as the First-Year Law Students’ Examination – is an exam taken by students opting not to attend accredited law schools, and comes before the main bar exam which allows them to practice law in California.

After the exam, Kim took to social media to reveal that she had officially passed the legal test.

“I failed this exam 3 times in 2 years, but I got back up each time and studied harder and tried again until I did it!!! (I did have COVID on the 3rd try w a 104 fever but I’m not making excuses),” she admitted.

The fashion mogul then thanked her mentors Van Jones, Jessica Jackson, and Edy Haney for their help in the process as well as her professors at Bar Bri Law School.

Kim closed out her post with a memory of her father, writing: “I know my dad would be so proud and he would actually be so shocked to know that this is my path now but he would have been my best study partner.”

While she is not enrolled in a law school, Kim is training under the mentorship of an attorney and could become a fully qualified lawyer by 2024.