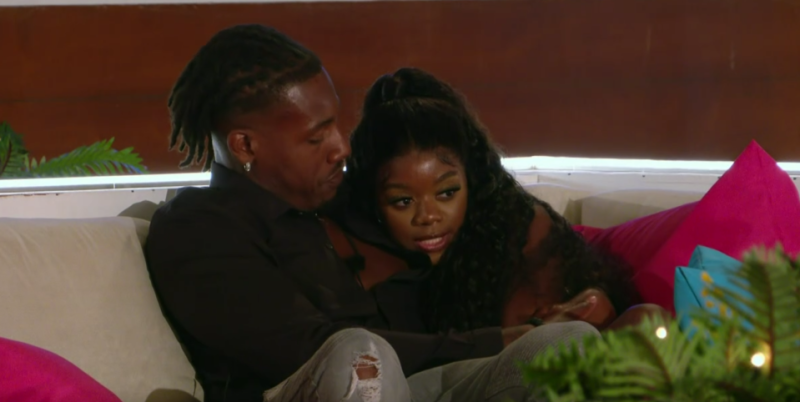 LOVE Island fans have hit out that one couple are “faking” their romance in a wild new villa theory.

Viewers flooded Twitter to accuse Tanya Manhenga and Shaq Muhammad of forcing it in order to stay in the villa.

ITVFans think that Tanya and Shaq could be faking it[/caption]

Love Island fans watched on tonight as Shaq, 24, declared his feelings for Tanya, 22, after they coupled up again.

The tense recoupling on Friday night saw Tanya choose her original boy over David Salako, who later left the villa.

Celebrating their continuing romance, the pair sat down on the day beds to gush over one another in scenes tonight.

Shaq told Tanya that he was looking to get to know her more as he admitted he was “looking for a girlfriend”.

The pair shared a kiss on screen after discussing wanting to continue their relationship and deepen their bond.

However, some fans took to Twitter to admit they “weren’t buying it”, after noticing Shaq giving her the “side eye”.

“Every day I feel like we’ve been getting stronger and stronger,” Tanya told Shaq at one romantic moment.

Viewers thought they had seen the star give Tanya an “eye roll” as they talked about still being together.

“I know Shaq didn’t just roll his eyes when Tanya was basically confessing her love to him,” one said on Twitter.

Another chimed in: “You can’t convince Shaq and Tanya don’t hate each other,” as a third said: “Did Shaq roll his eyes? You can tell he’s not serious.”

“Tanya and Shaq both don’t like each other,” a fourth added, while a fifth said: “I’m not buying one bit of Shaqs and Tanya.”

A sixth added: “Shaq’s face is telling me he’s not buying it. He knows Tanya isn’t into him and the feeling is mutual.”

While someone else hit out: “I’m sorry but Tanya and Shaq give me completely fake and gameplay vibes.”

Others stepped in to defend the couple, calling their intimate chat “cute” as they dispelled the fakery rumours.

“Tanya and Shaq melt my little heart,” one said, as another agreed: “I just love Shaq and Tanya.”

Love Island airs weekdays and Sunday’s at 9pm on ITV2