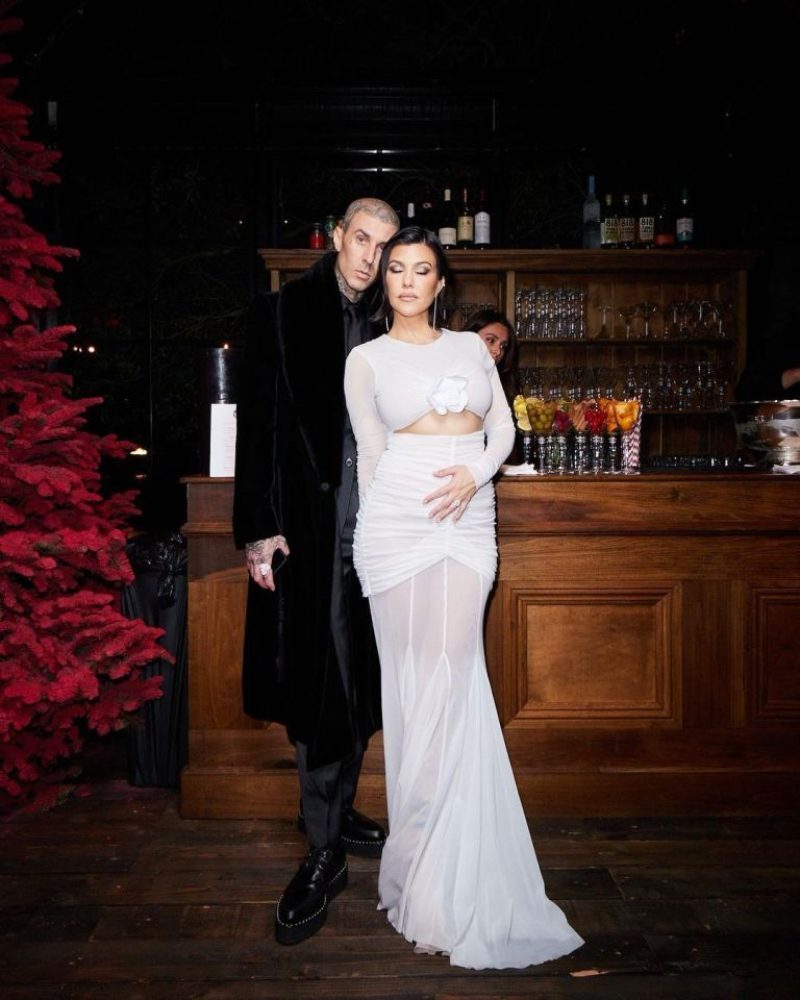 AN IMAGE of Kourtney Kardashian’s eyes have been tattooed onto husband Travis Barker’s leg, and his Instagram has picture proof of the commitment made in ink.

Kourtney fans have been raving, but some think the eyes look like they belong to this dead megastar.

Kourtney Kardashian and Travis Barker have been known for their long history of showy public displays of affection and grandiose romantic gestures, the most recent of which is Travis getting his wife’s eyes tattooed on his legFans are saying the eyes look like this dead pop legend

“Oh hey there,” Travis captioned a slideshow of photos on Instagram, the first of which showed his head positioned right behind his wifey’s bottom.

He included another photo of himself, a full body shot of the tat, and, finally a close-up shot of the artfully crafted eyes.

“Everyone’s saying the eyes look like Michael Jackson’s,” one Redditor said in a thread discussing the photos beneath the Kardashian subreddit, r/KUWTK.

Another fan agreed, but they thought the drawing was missing an important detail that make the eyes Michael’s unique peepers.

“Just needs the little curl at the top, I think MJ used that image on his Dangerous album cover? Lol but yeah it’s giving me Michael Jackson,” they said.

“I don’t know why but it looks like Michael Jackson’s eyes in the last pic,” a third fan wrote.

A fourth Redditor thought the eyes looked like another famous person of closer relation to Kourtney.

In reply to the idea that the eyes read Michael, they said “I thought Kris Jenner.”

A HISTORY OF PDA

Since the romance between Kourtney and Travis began stewing around 2021, the pair became known for passionate, adolescent-like public displays of affection.

Prior to 2021, Kourtney and Travis were just friendly neighbors.

Members of the Kardashian family have been photographed with Travis for well over a decade.

It’s easy to characterize their slow-burn romance as Kourtney falling for “the boy next door,” because Travis has been her neighbor in Calabasas for years.

Travis has even made appearances on Keeping Up With the Kardashians a few times, bringing his kids over for a playdate, helping decorate for Christmas, and attending Kourtney’s birthday party.

The pair also increased their activity in the Instagram comments section, raising eyebrows by leaving flirty emojis on each other’s photos.

Later that month, entertainment news outlets began reporting that sources close to the couple had confirmed their romance began in late 2020.

Hot posts continued to fly on both accounts, and it became expected to see flirty activity on Instagram coming from the two.

Kourtney and Travis made headlines yet again in April 2022 when it was announced that the pair tied the knot in Las Vegas, according to TMZ.

However, it was announced that the pair did not sign documents and were not legally married at the time of the ceremony.

On Sunday, May 15, 2022, Travis and Kourtney officially tied the knot in Santa Barbara, California, according to TMZ.

They were spotted exchanging vows on the steps of what looked like the Anacapa downtown courthouse.

The duo then hitched a ride in a convertible with a sign that said “just married.”

On May 22, the pair had their ‘third’ wedding in a lavish ceremony in Portofino, Italy.

PrevPreviousWho is Aubrey Plaza’s husband Jeff Baena?
NextWheel of Fortune contestant makes another major mistake after his ‘painful’ show moment is the worst in historyNext