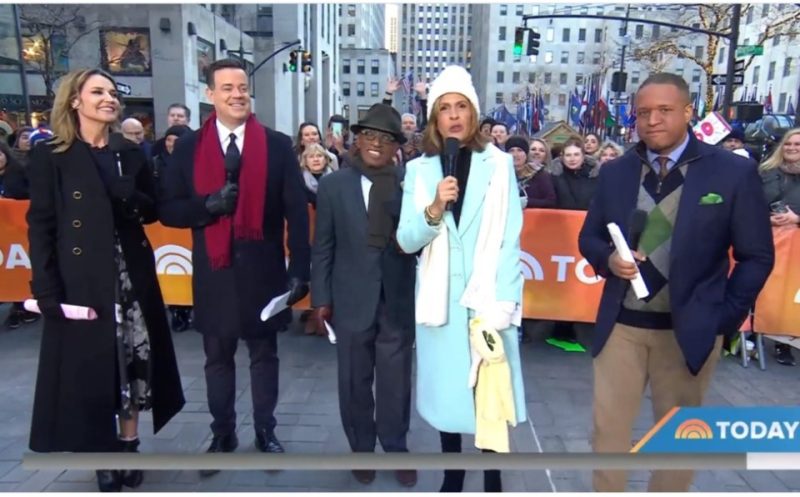 ABCSavannah Guthrie, Hoda Kotb, and their co-hosts said goodbye to a colleague on Friday’s show[/caption]

ABCHelen Healey, who was the show’s photographer, had her last day on Friday[/caption]

In between segments, they gave a shoutout to Helen, who is leaving the show.

“We also just want to give a shoutout to someone we adore around here,” Hoda said.

“She’s one of our photographers around here,” Hoda continued.

“Her name is Helen Healey. Today is Helen’s last day.”

The camera panned to Helen, who waved to it, along with cheering fans.

Hoda continued: “She captured a lot of magical moments for us, but she’ll be around and we’ll be seeing her again soon.”

“Helen, we love you. We just want to say that we’re happy you spent some time with us.”

Craig spoke up and said: “In all the time she has been here, always smiling.”

“And just radiates a goodness and sweetness,” Savannah said.

“Helen, we will miss you, but you’ll be back. We know you will, so thank you for everything.”

It is unclear where Helen is going next.

This isn’t the first colleague the hosts have said goodbye to.

Savannah admitted on Tuesday’s episode, “We’re gonna miss you,” during the emotional moment.

Appearing on the show, Kerry talked to Hoda about working the Olympics with her.

Kerry also said that he had the pleasure of going to every state in America, and 65 countries in total.

The journalist talked about being home with his wife, Deborah.

“A little more home time is good. We know she misses you, but we are going to miss you, Kerry,” Savannah commented.

“I mean, not only can you do any kind of story, you’re also an incredible reporter.”

Savannah continued: “So smart. You’ve helped me so many times, too many times to count.”

At the end of the segment, Al said he hopes a college hires him, so he can spread his wisdom.

His 32 years in the business led him to accomplish everything from reporting underwater in scuba gear to asking politicians tough questions.

Kerry also jumped out of airplanes, hung from cliffs, and reported on trials, mass shootings, elections, and more.

The 62-year-old has also been in the middle of more than 100 severe storms and reported on the ground on the war in Iraq.

He has won a Peabody and Emmy awards for his work and is sad to be leaving his NBC family.

“I think that I can’t believe that I had this amazing opportunity to join this family,” Kerry said on the show.

“I still pinch myself to think that you all welcomed me and that I was a part of this. It’s been a dream come true.”

ABCIt is not clear where Helen is going next, but the Today hosts insist she will be back[/caption]

ABCAccording to her Linkedin, Helen started at the Today Show in 2021[/caption]