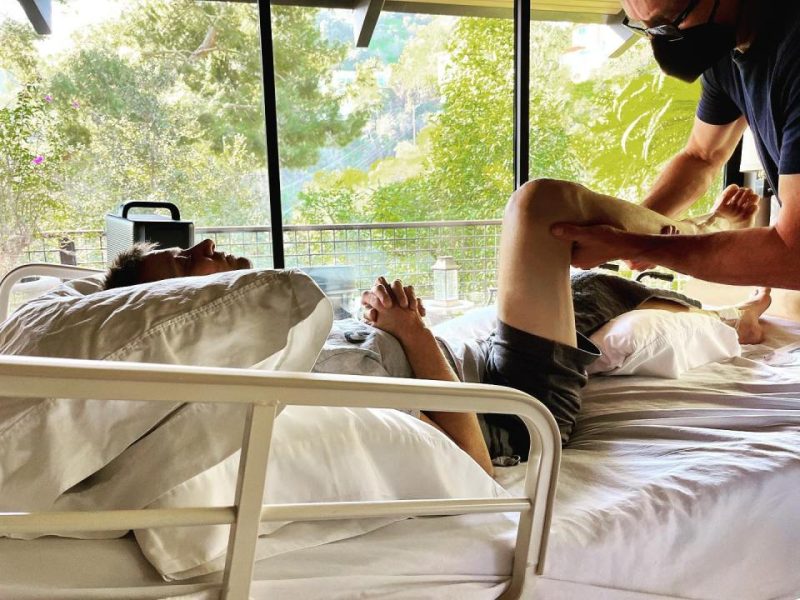 JEREMY Renner has revealed that he had “30 plus broken bones” after his near-fatal accident on New Year’s Day.

The Hawkeye actor, 52, took to Instagram on Saturday morning to detail his current perspective on 2023 to fans.

The Avengers star was flown to the hospital from his home in Reno, NevadaVALERIE MACON/AFP via Getty Images

“Morning workouts, resolutions all changed this particular new years …. Spawned from tragedy for my entire family, and quickly focused into uniting actionable love ,” Renner wrote in the post.

“I want to thank EVERYONE for their messages and thoughtfulness for my family and I …. Much love and appreciation to you all.”

The two-time Oscar nominee continued that his body will heal and that he will “grow stronger” from the experience.

“These 30 plus broken bones will mend , grow stronger, just like the love and bond with family and friends deepens,” Renner noted.

“Love and blessings to you all .”

As The U.S. Sun previously reported, Renner was run over by his Snowcat on January 1.

The story of what Renner was doing with the snow plow that resulted in his injuries has been told two different ways.

The actor’s representative, Samantha Mast, told People he was “moving snow from his driveway so that his family members could depart his home after ringing in the new year together.”

“He was also helping clear out the snow of his neighbor’s home as everyone up there had been without power for 24 hours, and there had been a large snowfall,” she continued.

However, Washoe County Sheriff Darin Balaam said Renner was helping a family member who got their car stuck in the snow nearby.

“Mr. Renner went to retrieve his PistenBully, or snowcat — an extremely large piece of snow-removal equipment weighing at least 14,330 pounds — in an effort to get his vehicle moving,” Balaam explained.

“After successfully towing his personal vehicle from its stuck location, Mr. Renner got out of his PistenBully to speak to his family member.”

Balaam said that it was then that Renner’s PistenBully began to roll forward, and he attempted to get back in the driver’s seat.

This allegedly led to him getting caught under the plow.

The 911 call made by Renner’s neighbor was recently obtained by Today, and it revealed chilling details about Renner’s injuries immediately after the accident.

The anonymous caller pleaded to the dispatcher for emergency services to hurry, as Renner was losing “a lot of blood.”

“Immediately! Someone’s been run over by a Snowcat, hurry!”

“His breaths are getting shorter, so, please,” they pleaded.

The neighbor could also be heard reassuring Renner that help was on the way, and encouraging the actor to remain awake.

It ultimately took emergency services about 22 minutes to arrive at the location of the accident due to the weather.

Renner was then flown via helicopter to a nearby hospital and underwent emergency surgery on January 2.

The first time Renner took to Instagram after the incident was on January 3 to confirm to the world that he did indeed survive.

“Thank you all for your kind words. I’m too messed up now to type. But I send love to you all,” the post read.

Then, on January 10, the actor’s sister, Kym, told People that their family was “thrilled” by his progress.

“If anyone knows Jeremy, he is a fighter and doesn’t mess around. He is crushing all the progress goals,” Kym said.

“We couldn’t feel more positive about the road ahead.”

On January 16, Renner confirmed in a Twitter post that he was out of the hospital and at home with family watching Season 2 of his show, Mayor of Kingstown.

“Outside my brain fog in recovery, I was very excited to watch episode 201 with my family at home,” he wrote.

For more celebrity content, check out The U.S. Sun’s coverage on the tragic passing of musician David Crosby.

The U.S. Sun also has the story of what happened with Alec Baldwin on the Rust set that resulted in the death of the movie’s cinematographer, Halyna Hutchins.