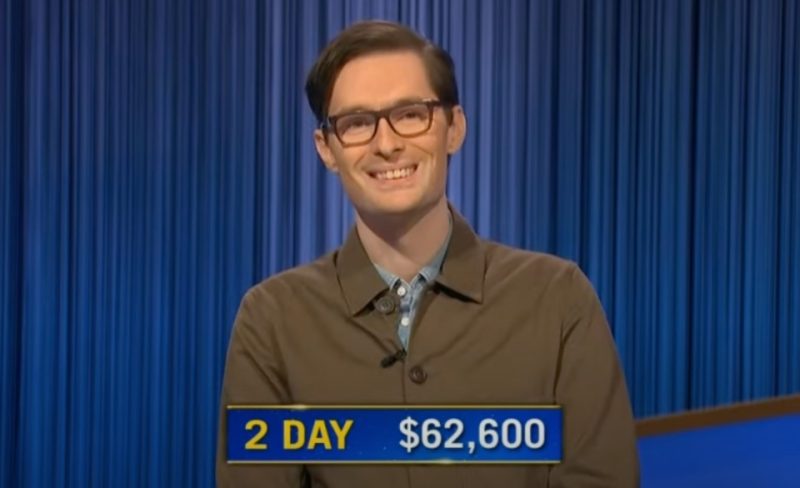 Fans admitted in various online forums that the exciting newcomer looks “unstoppable” so far and also a bit like actor Bill Hader.

GettyDozens of people posted how he looks like Bill Hader, not exactly an insult[/caption]

Troy, a music executive from Tampa, Florida took to the winner’s podium after a runaway victory of $27K last night.

His second Jeopardy! outing was an all-out boys’ night as there were three male contenders, but it was Troy who manned the buzzer.

Getting both “Daily Doubles” in the second round with a huge smile and 31 correct responses total, he soared to his second runaway.

Once more, by Final Jeopardy his earnings were so high he just couldn’t be caught.

The clue under “Television” read: “Mike Post combined the sound of a slamming jail door, an anvil & 100 men stomping on a floor for this series that debuted in 1990.”

Speaking of TV, one fan posted to Instagram: “All I could think was how much that man looks like Bill Hader!“

“He looks JUST like Bill Hader” wrote a second comparing the current champ to the Barry star and Saturday Night Live alum.

“I have to say I’m getting ‘taller, skinnier Bill Hader’ vibes here” wrote a third on Twitter.

“I’m pretty sure the dude Troy on Jeopardy! right now is just Bill Hader doing a voice,” another agreed.

Even Troy’s proud sibling had to buzz in on that platform and wrote: “My brother, Troy won his first game! Apparently, people think he looks like Bill Hader lol.”

Whether it be the parted brunette hair or Troy’s casual yet sportsmanlike approach – he clapped when his rival found the first “Daily Double” – fans felt there was definitely a similarity on the board.

To which another user again replied: “Troy reminded me of Bill Hader.”

Ken also revealed on stage that Troy’s emotional first win saw him looking up above near tears for the sweetest reason.

Troy’s mother recently passed away and they “shared a big love” of watching Jeopardy! together.

So far, only four contestants have won big enough to qualify for next year’s Tournament of Champions.

Now that Troy has won two games with two high scores apiece, some fans think he could certainly qualify, if not get greenlit for a recurring role as the next big champion.

One fan wrote to Reddit: “Seems like Troy found his buzzer rhythm today, and that combined with his vast wealth of knowledge could make him unstoppable.”

“A competitor with strong knowledge barely securing a needed runaway in game 1 then dominating in game 2? Seems familiar…” wrote another.

“I mean, wow, what a performance. Really hope his dominance on the buzzer wasn’t a fluke, would love to see him in the Tournament of Champions,” hoped a third.

Troy is one of the top U.S. players in the niche, online invite-only Learned League, a trivia club that has 25,000-plus members, and Jeopardy!-like questions.

Hardcore fans have been buzzing about Troy since he’d be announced as a contestant since it’s no easy feat to “win the scarf,” the prize given to the secret league’s champ, four times.

Many Jeopardy! champs are, or secretly were, members including host Ken Jennings, 48, per The New Yorker – he had to step down for obvious reasons.

Meanwhile, Troy also doesn’t have any social media accounts – which is another sign he could be our next big winner since champs are advised to keep a low profile, or profiles.

Meanwhile, co-host Mayim Bialik, 47, is expected to return to the game show in late February.

PrevPreviousJinger Duggar says she hasn’t spoken to brother Josh in over 2 years as he remains in prison on child pornography crimes
NextHow hippie-rock legend David Crosby was brought crashing to earth by ego, feuds and drugsNext