How hippie-rock legend David Crosby was brought crashing to earth by ego, feuds and drugs 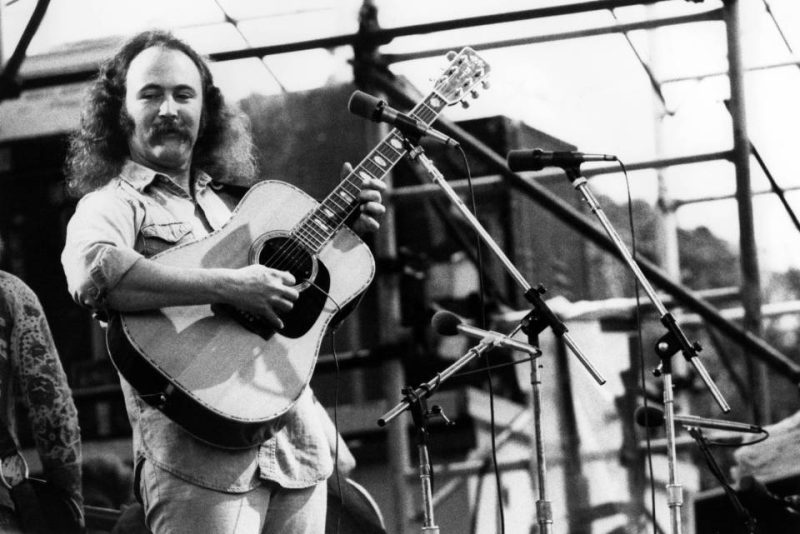 OF all the singers from the hippie generation, David Crosby was one of the most far out, man!

His death at 81 after years of health problems marks the passing of a folk-rock pioneer, who forged his name in The Byrds, discovered Joni Mitchell and reached a creative peak with supergroup Crosby Stills & Nash.

RedfernsOf all the singers from the hippie generation, David Crosby was one of the most far out, man![/caption]

GettyCrosby, second from left, with The Byrds in the 1960s[/caption]

Crosby’s mugshot after his drug and gun arrest in 1982Getty

Crosby dealt in divine harmonies and soothing tunes but his rackety life had more than its fair share of bust-ups, addiction problems, run-ins with the law and failed relationships.

With his shaggy, shoulder-length hair and walrus moustache, he epitomised the patchouli-scented counter-culture scene.

While the Vietnam War was raging and young Americans were being drafted, he helped foster the spirit of peace, love and understanding which rose up in defiance.

Only the wild Crosby would write a song (Triad) about a ménage à trois based on the antics at his Beverly Hills home and deemed “too controversial” by his Byrds bandmates.

He also had a hand in writing the druggy hit Eight Miles High, contributing the line “rain grey town, known for its sound” about London in the Swinging Sixties.

The song encountered various radio bans amid accusations of advocating recreational drug use.

By the late Sixties, the scene’s substances of choice were LSD, known as acid, and marijuana. Music was supplied by Jefferson Airplane, the Grateful Dead and David Crosby, Stephen Stills, Graham Nash along with their occasional bandmate Neil Young.

If Crosby’s concert peak was playing Woodstock with CSNY on the third day of “peace and love” in front of 500,000 people, his hippie dream came crashing down a year later at Altamont.

The 1969 festival, headlined by the Rolling Stones, was blighted by a frenzy of Hells Angel- provoked violence. A woman was stabbed to death, two people died in a hit-and-run accident and there was an LSD-induced drowning.

Croz, as his friends and family knew him, also witnessed many casualties among his peers but became a rock ’n’ roll survivor, a kind of West Coast Keith Richards.

He advocated cannabis use for more than 50 years and even launched a brand called Mighty Croz.

“All those hit songs, every one of them, I wrote them all on cannabis,” he admitted.

His father, Floyd, was an Oscar-winning cinematographer and his mother came from a New York society family.

Despite showing an interest in music and taking part in musicals, Crosby did not care much for school, eventually dropping out of a drama course at Santa Barbara City College to pursue a singing career.

The star with long-time partner Christine Hinton, who was killed in a car crashBOBBY HAMMER/SONY PICTURES CLASSICS

In 1962 he became a dad for the first time. His musician son James Raymond was given up for adoption but they reconciled later in life and even made records and performed together as CPR.

Crosby had three more children, Erika, Donovan and Django, with three different women and was also the sperm donor father to two of singer Melissa Etheridge’s children. (He was still with Django’s mother Jan when he died).

His first big break came in 1964, when he was introduced to singer/guitarist Jim McGuinn, who changed his name to Roger, and Gene Clark, in Chicago.

After first calling themselves The Jet Set, they added Chris Hillman on bass and Michael Clarke on drums and soon morphed into The Byrds.

When their manager Jim Dickson secured a demo acetate of Bob Dylan’s psychedelic masterpiece Mr Tambourine Man, they were given the OK to record the cover that made their name.

With McGuinn’s 12-string guitar leading the way and Crosby masterminding gorgeous harmonies, they hit No.1 in the US and the UK, and began a folk-rock boom.

In the jingle-jangle morning, everyone was following The Byrds.

While in the band, Crosby was credited with making the song Hey Joe famous, although Jimi Hendrix later made it his own, and his notable compositions included Everybody’s Been Burned, regarded as one of their most haunting efforts.

In 1967, he stumbled into a club in Florida and witnessed the incredible talents of the young Joni Mitchell.

She accompanied him back to LA where he introduced Joni and her music to his inner circle while also embarking on a fling.

Crosby secured her a deal with Frank Sinatra’s record label Reprise to make the acoustic album which became her debut, Song To A Seagull, and he even gained a production credit.

Later, a source of rancour emerged when Graham Nash went on to date his muse. Crosby confessed in 2019 that he never got over his “bad case of Joni”.

He stayed in The Byrds until 1968 but tensions dogged his final year or so and he was finally forced out after personality conflicts with McGuinn.

Fiery Crosby angered his bandmates by spouting conspiracy theories on stage and clashed egos over song selection for their albums.

At the time, he’d grown close to Buffalo Springfield’s Stephen Stills and soon they joined forces with British singer Graham Nash, who quit The Hollies, to form CSN.

Crosby contributed Guinevere, which, true to form, was “about three women I loved”.

He said: “One of whom was Christine Hinton — the girl who got killed who was my girlfriend — and one was Joni Mitchell. The other one is somebody that I can’t tell. It might be my best song.”

Hinton, his partner at the time, died in a car crash in 1969 after the song had been released.

Perhaps his most revered album is Déjà Vu, which appeared in 1970 with Neil Young added to the line-up.

Young had been introduced by fellow Canadian Mitchell and their cover of her Woodstock served as a swansong for the hippie era.

During the sessions, Crosby would frequently break down and cry over the loss of his beloved Christine.

Over the years since, he was involved in numerous solo and band projects, various reunions with CSN and, more rarely, Y.

In the Eighties, a difficult decade for older rock stars when synth pop ruled the roost, he went completely off the rails.

Crosby spent nine months in a Texas state prison after being convicted of drugs and weapons offences, including possession of heroin and cocaine, to which he had become addicted. At least the stint helped him get off hard drugs.

GettyThe star with his wife Jan Dance in 2015[/caption]

His wild ways contributed to health issues and, in 1994, he needed a liver transplant due to hepatitis C, which was paid for by none other than Phil Collins.

He also developed Type 2 diabetes and needed insulin to manage his condition.

Since the turn of the Millennium, he got into trouble with the law again for firearms and drug offences and, quite recently, fell out completely with Graham Nash.

Without revealing specific details, Nash said in a 2016 interview: “Right now, I don’t want anything to do with Crosby at all. It’s just that simple.

“He’s been awful for me the last two years, just f***ing awful. David has ripped the heart out of CSNY.”

But the last word comes from Nash in the wake of the death of his old bandmate.

“I know people tend to focus on how volatile our relationship has been at times, but what has always mattered to David and me more than anything was the pure joy of the music we created together.

“David was fearless in life and in music.”