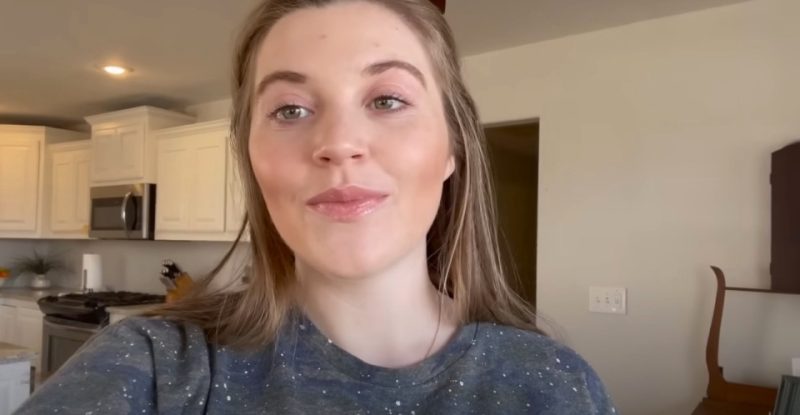 DUGGAR fans are split after Joy-Anna underwent a major makeup transformation from her husband Austin Forsyth.

The former TLC star gave Austin products to work with and let him try his hand and beautifying her before a date night.

The video kicked off with an eager Joy-Anna, 25, gushing: “we’ve got a fun video for you.”

While Austin didn’t initially appear eager about the idea, he played along and got into the process as the clip progressed.

The mom of two laid out her makeup for her husband and gave him free rein.

He chose several products, applying them how he thought he was supposed to.

Austin appeared uncertain at times and joked about his abilities, at one point saying: “This is definitely gonna be one of those where you get what you pay for.”

He began applying bronzer to Joy-Anna’s cheeks, at which point she questioned: “Are you going for the dramatic look?”

Her husband said back: “I guess we are. We’re committed.”

At that point, the pregnant star reminded her hubby: “Hey, you have to make me look nice. You can’t purposely make me look bad.”

He continued applying makeup, at one point gushing over Joy-Anna’s look to their son Gideon, who woke from his nap to find them completing this challenge.

Austin asked: “Would you marry your mama? She’s pretty isn’t she?”

Finally, he finished and showed Joy-Anna her makeover.

“I know we’re missing some of the few finer touches,” he quipped.

Joy-Anna made sure to compliment her husband’s work, however, noting that he did a good job.

In the comments, fans were split.

Others were shocked to see so much personality from Austin, who is typically very quiet and reserved in their YouTube clips.

Another commented: “I give Austin a 7/8! He did really good and you look beautiful as always Joy!”

A third fan commented: “For his first time doing makeup and not necessarily knowing what he’s doing… I’d give him at least a 7. He did great!”

Someone else noted: “You’ve come a long way, Austin. Never did I think you could do such a fun thing for Joy.”

Another fan wrote: “I think you’re spot on with a 4. Now for Austin’s attitude while doing it, he gets a 10+!”

A sixth commenter chimed in: “I dedicate my thumbs up to Austin for being a good sport. I give him a solid 5 for the effort.”

Someone else added: “Austin actually did a great job! I’m very surprised.”

Joy-Anna is currently pregnant with her third child and has been documenting her pregnancy since early on.

So far, she has brought fans along to doctor’s appointments, revealed that she’s expecting another baby boy, and shared what she and Austin plan to name their son.

Recently, she shared a photo of her growing bump, as she broke from her family’s strict dress code.

She wore form-fitting flare-leg jeans, a grey T-shirt that hugged her belly, and a green overshirt.

Her hair was in a sleek updo and she had on a pair of chic black-framed glasses.

Her other sister chimed in: “So cute!!”

Earlier in the day Joy-Anna documented a solo lunch date, treating herself to her pregnancy cravings.

She also shared photos of her older children, Gideon and Evelyn.

The pair appeared to be enjoying some time outside, posing on playground equipment.

While Joy-Anna has been transparent with fans throughout her pregnancy, many are speculating about some details that have not been made public.

While she has not said so, many fans think she’s expecting twins.

“Did I miss a twins announcement?” asked one in the comments.

“Big baby I believe. Or two,” guessed another.

YouTube / FollowtheForsythsShe showed off the finished product, which impressed some fans[/caption]