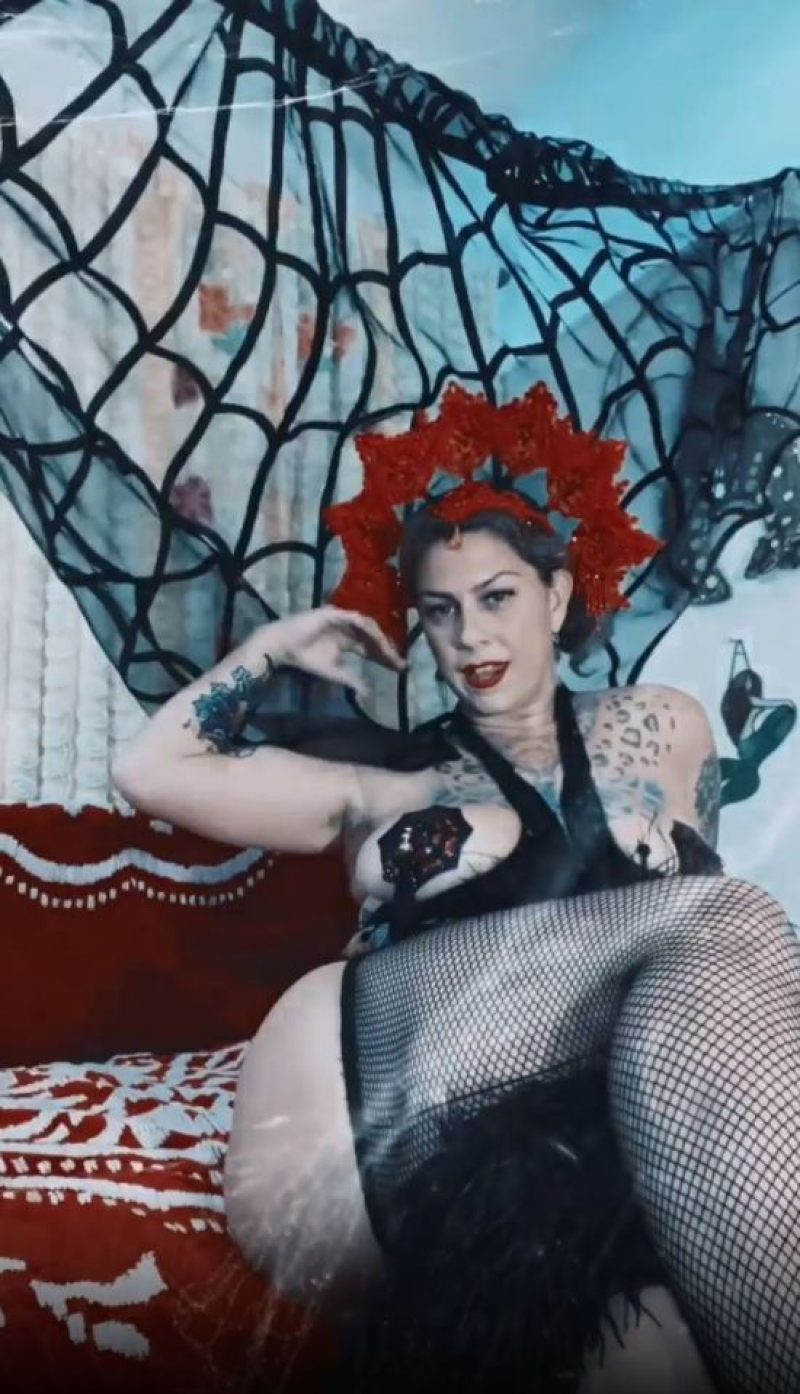 AMERICAN Pickers star Danielle Colby has proven time and again that she is not shy about showing off her body.

The reality star often takes to Instagram to show off daring ensembles, and oftentimes bares all.

In her most recent daring clip on Instagram, Danielle, 47, strutted around her bedroom, rocking string lingerie while twirling a large blue and white feather.

The nearly nude American Pickers star exposed her breasts in the see-through top, though her backside was entirely out as she shook it at the camera.

The outfit also showcased her collection of body tattoos along her arms, stomach, chest, and back.

Danielle – who dabbles in Burlesque dancing – explained the routine in her caption, noting she’s turned to dancing to aid in her recovery post-surgery.

She wrote: “I’ve been working on some movement post-operation and have been inspired to do a little fan dance practice. I’ve uploaded the full video to the sites! Sweet dreams.”

The video comes after Danielle stripped down to her naked body in a New Year’s photo.

She flaunted the tattoos inked on her bare booty as she straddled the bed.

The reality star loosened her long grayish hair into curls while stretching across.

The burlesque star recently ditched her clothing and took a dip into a white tub.

With her hair soaking wet, the star showed off her tattoos and perked up her booty at the camera.

She appeared to be swimming in a tub full of rainbow-colored chips.

“Who’s ready for a midnight snack?” Danielle asked her followers.

An example of that was when the reality star posted an NSFW video on Instagram to celebrate Halloween.

In the video, Danielle wears tassels in the shape of spider webs over her nipples, while pairing the look with a black thong and fishnet stockings.

At one point in the racy video, she shakes her behind at the camera, showing off her thong and a tail-like feathery boa.

She strikes various poses through a sheer spiderweb fabric, giving viewers a full view of her body.

Towards the end of the video, the American Pickers star strips off her thong, completely naked, with only the boa covering her private areas.

Fans are often shocked by the 47-year-old’s sexy display, with some wondering why this side of her is not shown on the History Channel show amid its troubled ratings.

“Why wasn’t this on American Pickers?” one person asked.

“You’re the only reason I ever watched American Pickers…” another gushed.

“Looking fab, hope you’re on the road to recovery,” said a third.

Danielle has been slowly recovering since undergoing a hysterectomy in October 2022 after suffering from painful uterine fibroids.

The road to recovery has not been easy for her as she has been dealing with her own “chronic pain.”

She spent about 14 days unable to eat solid food.

Danielle shared: “I lost so much weight so fast that my body could not muster up the strength to continue to heal properly.”

Although she is on the mend, the TV star said she’s being cautious: “I’ve been out of bed, running around town, mostly pain-free, being social and productive for 4 days now.

“I’m careful not to wear myself down, but I need to be outside my house, for now, enjoying long walks, vintage shopping, grocery getting, etc.”

The TV personality previously confessed to feeling “exhausted and down.”

“Things don’t always go as planned so I anticipate that change is inevitable,” she said.

“It seems that on my best days, I’m out and about. Usually trying to keep my body moving and my mind busy.”

Co-hosts Mike Wolfe and his brother, Robbi, joined Danielle on the Season 24 premiere, as they competed against White Stripes frontman, Jack White, 47, in a contest.

The U.S. Sun reported, however, that the season 24 premiere ratings were down as only 943,000 viewers tuned in, according to SpoilerTV.

Viewers eventually tuned out towards the end of season 23 as ratings dipped to 829,000 watchers for the August 27 episode.

The ratings have not been the same since former host Frank Fritz was fired from the popular show in 2021.