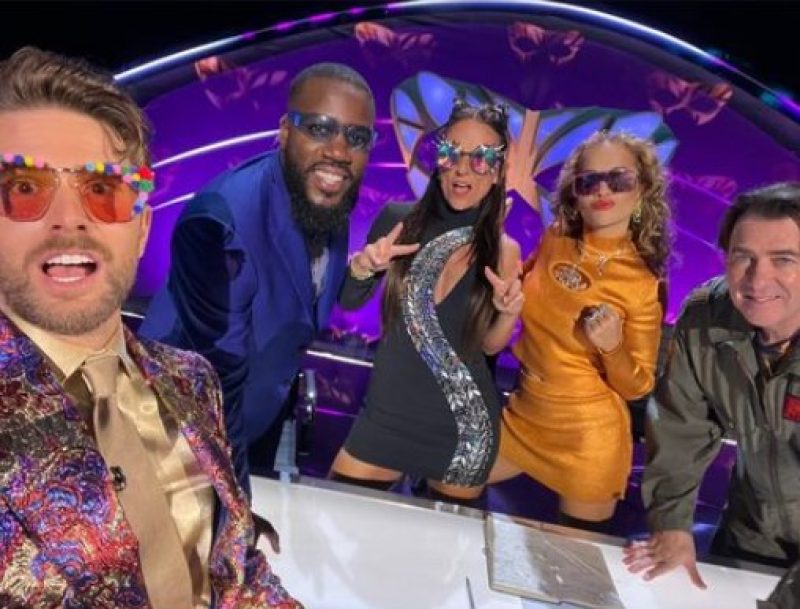 RITA Ora has shared a hilarious photo from behind-the-scenes of the Masked Singer ahead of the third show.

The Hot Right Now singer took to her social media to pose for a photo alongside her fellow judges on the ITV programme.

InstagramRita shared a hilarious backstage snap from the upcoming show[/caption]

The singer took to her Instagram with the photo of herself alongside Jonathan Ross, Davina McCall and Mo Gilligan.

The judging panel were also joined by the Masked Singer host Joel Dommett in a series of strange outfits and sunglasses.

Rita, 32, could be seen wearing a tiny orange mini dress with cut-out panel front as she raised her arms up to her chest.

She struck a silly pout towards the camera as she let her curly hair flow down her back, wearing a pair of dark sunglasses.

Rita cosied up to Davina, 55, who looked stunning in a black mini dress – which featured a sparking snake detail.

She paired the look with reflective sunglasses as her bun was styled half up half down into two space buns.

Host Joel, 37, stood out the most, in a brightly coloured suit with pink glasses covered in rainbow-coloured pompoms.

It comes after Rita looked sensational in a mini skirt and top as she teases The Masked Singer’s special theme last week.

She put on a stunning display as she posed for the cameras in a fashionable co-ord set backstage before appearing on the ITV competition show.

Rita showed off her dazzling figure in a beige top embellished with a chunky black buttons design and a matching mini skirt.

The ITV celebrity contest, finished off her outfit with a pair of chunky black suede material, knee-high boots.

Her hair was styled in a slicked-back bun along with bold eye-makeup that consisted of matte black eyeliner.

The show sees famous faces go head to head performing musical numbers while their identities are kept a secret under some outrageous costumes.

Video recordings are shown to the judges and public – hinting who the unknown singer could be.

After the judges make their final guesses one contestant is unmasked.

The Masked Singer continues Saturday at 7pm on ITV