RHOSLC’s Jen Shah victim Trisha, 75, sobs as she breaks her silence after TV star ‘ruined her life’ with fraud scheme 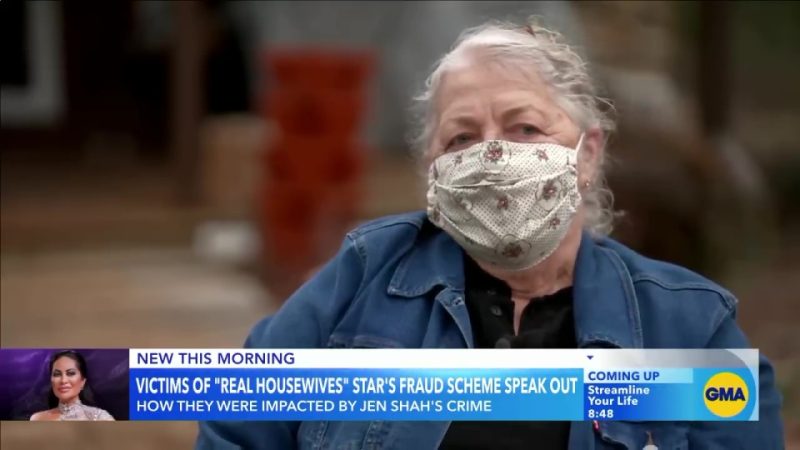 ONE of Jen Shah’s victims has come forward to share her story after the RHOSLC star was sentenced to prison time.

Trisha, 75, broke down in tears as she claimed the Bravo celebrity “ruined her life.”

Good Morning America featured a segment on Jen’s case that focused on the victims.

During the episode, several people who fell for the scheme and lost out on thousands – and in some cases, tens of thousands – of dollars spoke out.

Trisha, who hid her face behind a surgical mask, said on the show: “I’m telling the world I was stupid enough to get caught in a scam and I’m not a stupid person, but I did make a big mistake.”

She added: “Do I want to tell the world that? No, I really don’t. But I don’t want other people to have to go through that shame that I went through.”

Trisha claims she was tricked out of “half of her life savings,” spending $47,000 to the company Jen claimed to be running, which apparently promised to help start small businesses.

The victim claims it was “very convincing,” adding that she was “shell-shocked” when the FCC contacted her about the scam.

“I am just recovering from being in a deep depression,” the victim confessed.

“I’m gonna cry. You get to the point where there is no way out. I don’t have the money to take care of myself.”

Another victim said on GMA: “I probably spent about $44,000 on six credit cards. All, of course, went into bankruptcy because of course I couldn’t afford to pay them.”

The morning show also featured text messages sent by Jen to the people she employed, many of which appeared to be mocking those they were defrauding.

Hours after the show aired, Jen took to her own Instagram feed to set the record straight about something else.

Jen released a statement on social media amid rumors that she was planning to sit down with Bravo boss Andy cohen for a one-on-one.

The statement said: “On January 6th, I stood before Judge Stein and asked him to see me not as a fictionalized character, but as the real Jen Shah. I am now at a point, legally, emotionally, and mentally, where I can answer some questions and provide a few unknown details about my case. I want and need to share these critical facts. I owe it to those that love and support me to hear the truth.”

The Real Housewives star continued: “I will not be doing the 1:1 with Andy Cohen and Bravo because of their unwillingness to remove contractual provisions that would allow the network to legally make misrepresentations of me and my story, relating to any and all topics, prior to and during the course of my participation.

“This specific 1 on 1 interview was not part of my RHOSLC reality TV contract. I promised myself and my loving family that I would not allow this portion of my life to be sensationalized or inaccurately conveyed.”

Jen concluded: “Too many people have been hurt by my actions and my inability to control my own narrative. I would rather remain silent and wait until I am able to accurately share my story than continue having complete lies and misrepresentations about me smeared across the headlines. I intend to speak and you will hear from me. I will share my story and this painful part of my life very soon.”

Prior to the statement, she had been teasing a possible return to Bravo.

She posted a glammed-up photo of herself with the caption: “Dress Rehearsal… See you soon.”

Jen was sentenced to six and a half years behind bars for her involvement in the scam earlier this month.

GettyJen previously teased a potential return to RHOSLC or Bravo[/caption]

GettyAfter her sentencing, she said she won’t be doing a sit-down with Bravo despite rumors otherwise[/caption]