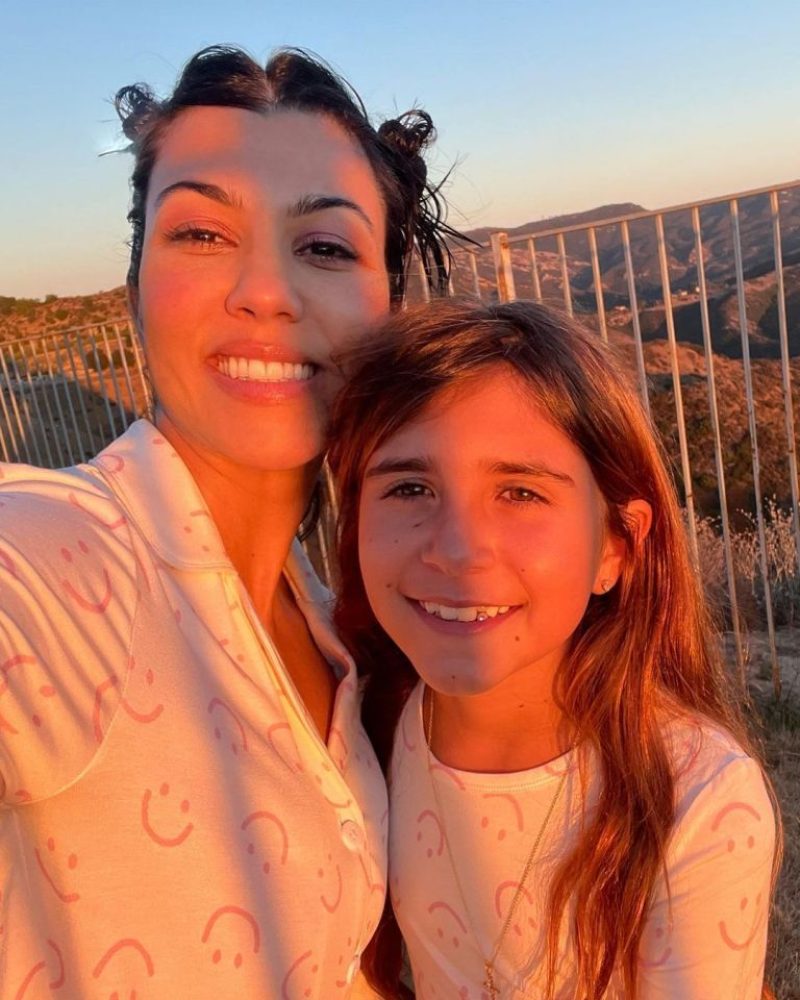 KOURTNEY Kardashian has been flamed by fans after her daughter Penelope shared a mature makeup tutorial online.

The 10-year-old posted the video to the joint TikTok account she shares with her mother.

In the clip, Penelope walked her followers through her step-by-step getting-ready routine, including many pricey cosmetics.

The pre-teen flashed each of the products at the camera before applying them through the mirror, with her hair pulled back using a pink spa headband.

Though the comments are turned off on the mother-daughter duo’s page, fans had plenty to say on a Kardashian forum where the video was shared.

The original poster wrote: “Isn’t Penelope way too young for such an extensive skincare and makeup routine?”

Others agreed that the regimen was too grown up for an elementary school student.

“When I was 10 it was a good day if I just washed my hands with soap. Maybe it’s just a case of a girl copying her mom,” one person theorized.

“Literally, I don’t even have kids and know this is ‘monkey see, monkey do’ it just looks extra bad or whatever because they’re rich so instead of her f**king up her mother’s stuff she has her own,” another remarked.

“I would be interested to hear a pediatric dermatologist’s thoughts on this because I would think at her age a nice neutral face wash, moisturizer, and sunscreen would be good enough,” chimed in a third.

“I didn’t start having a skin care routine until I was like 18-19 years old. I would wash my face and moisturize when needed. Maybe I’m a late bloomer but I mean 10 years old and her skin care is more extensive than mine, and I’m in my mid 20s now,” someone else said.

This is hardly the first time that Kourtney has been scrutinized over her daughter’s behavior on social media.

The last time involved The Kardashians star, who joined the youngster in a brief TikTok of them dancing together.

In the clip, Kourtney – sporting a gray hoodie and part of her short dark locks pulled back – stood in front of a mirror during a glam session.

Seconds later, her middle child peeked behind her, and the pair danced and lip-synched to the track Kill Bill by SZA.

However, fans weren’t pleased with the song choice and slammed Kourtney for joining her daughter in singing an “inappropriate” lyric.

The lyric in question goes: “I might kill my ex, not the best idea,” which fans immediately tied to Kourtney’s baby daddy, Scott Disick.

A third said: “First Kim and North now Kourt and P,” referencing Kim Kardashian, 42, and her daughter North‘s recent video where the nine-year-old morphed into her father, Kanye West, 45.

“She knew what she was doing with the lyrics,” a fourth commenter said.

One more remarked: “Scott be like [insert skull emoji].”

In another popular thread, someone said: “Feels slightly inappropriate to be in this video with P when it’s about her dad!”

“When the ex in question is your Dad [insert upside-down smiley face],” another said

Kourtney has since moved on with her now-husband, Travis Barker, 47, whom she married in May 2022 in Portofino, Italy.

TikTok / Penelope DisickThe lyric was, ‘I might kill my ex,’ which fans connected to her baby daddy Scott Disick[/caption]

InstagramKourtney moved on from Scott with her now-husband, Travis Barker, whom she wed in May[/caption]