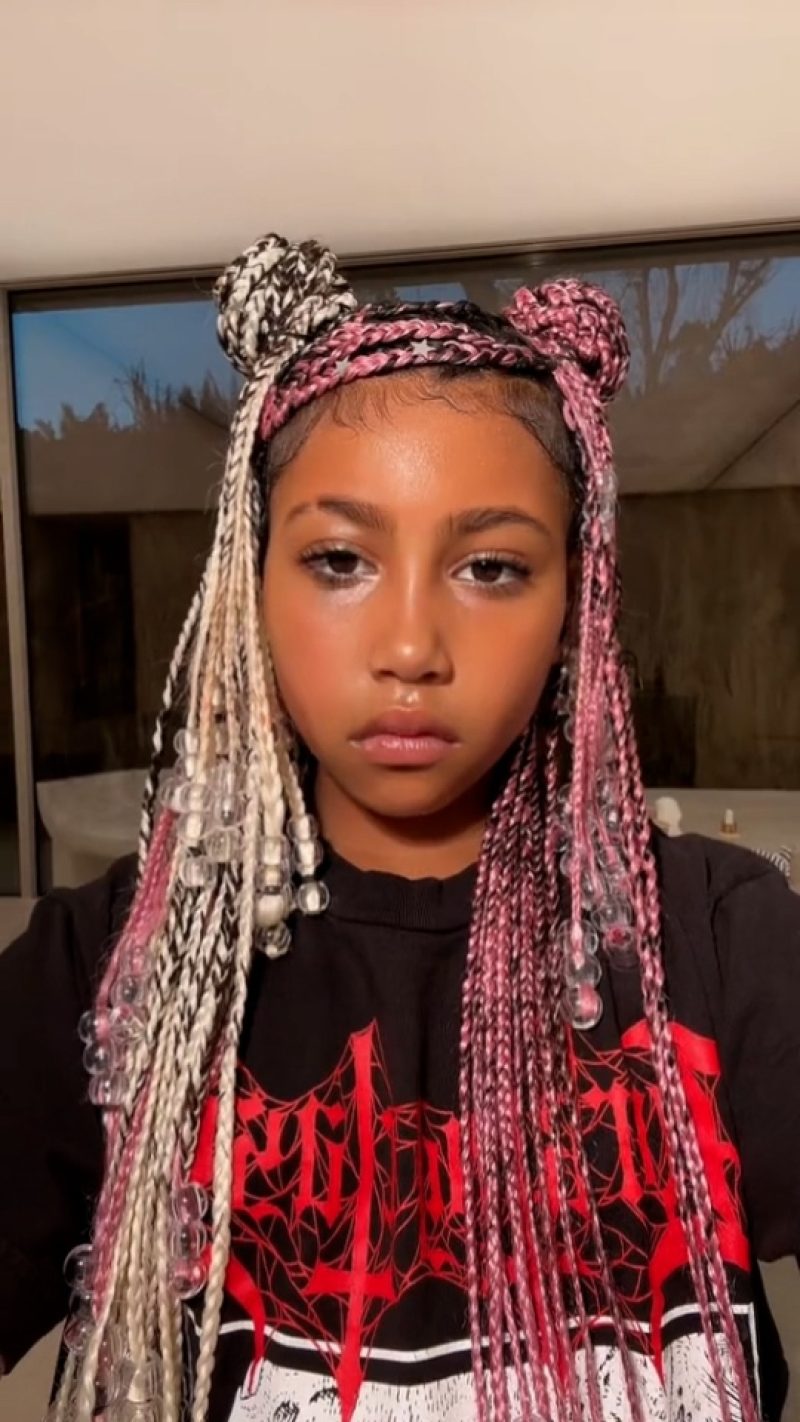 KIM Kardashian’s daughter North has shared a new TikTok of herself singing while going through her makeup routine.

The young Hulu star lipsynced along with a mashup of a Beyonce song and a Notorious B.I.G. track.

TikTok/KimandNorthNorth West has stunned fans, sharing her makeup routine in a TikTok[/caption]

At the beginning of the TikTok video, North, nine, was seen playing with products, pouring them from one container into another and mixing them up.

Her hair was in braids with beads at the end with one half of her head blond and the other light pink.

Kim’s eldest child had on a rock band-style T-shirt.

She pulled faces as she sang, rolling her eyes and gesticulating wildly at times.

North began her routine by washing her face, taking a quick break to dance around the bathroom, and then moisturizing with a drugstore product.

She then pulled out several other expensive skincare items, including something from her mom’s SKKN range.

The young TV personality showed off the product in a closeup, posing with it near her face before applying it.

After her face was cleansed and products were piled on, North applied makeup.

She dotted highlighter all over her face and curled her eyelashes on camera.

The video ended with her showing off the finished product, staring straight into the camera.

North is active on social media and makes a habit of showing off her makeup and skincare routines online.

Earlier this month, she documented a lavish spa day on the TikTok account she shares with mom Kim.

She used a very popular TikTok sound that is usually paired with videos of people going to the hair salon for a major hair transformation, and North didn’t disappoint.

The video started with North showing off her messy bedhead and natural curls.

She then got her hair washed and blow-dried while she made funny faces at the camera.

She helped brush her baby hairs while other people worked on braiding her hair.

At one point, fans saw a short clip of a piece of North’s hair soaking in a coffee pot filled with water.

Once her braids were done, Kim and Kanye West’s eldest daughter laid her own edges, and it appears she’s getting as particular as Kim when it comes to her appearance.

A lot of hair mousse was then applied to North’s head before it was set under a hair dryer.

North finished the TikTok by showing off her new hairstyle and applying a fresh coat of lipgloss.

Although she’s relatively active on social media, North must abide by mom Kim’s rules about her TikTok use.

While chatting on Gwyneth Paltrow’s The Goop podcast, the Kardashians star revealed that she never lets North get on TikTok unsupervised.

Gwyneth opened up the conversation about Kim allowing North on TikTok despite receiving a lot of fan backlash about the decision.

Penelope, ten, is Kourtney Kardashian‘s daughter and is a close age to North.

Kim alluded to her ex-husband Kanye and continued: “Their dad is not happy about that and I respect that.”

Although Kim still allows North on the social media accounts with strict rules.

Kim revealed: “It can only be on my own phone. It’s not something where she can scroll and look at things.

The Kardashian star stressed: “The way she is so creative and the way she loves to do this video.

“She’ll do skincare stuff, she loves special effects makeup, and that’s what she loves to do.

“She loves to do it and it makes her so happy. She’s so innocent in so many ways… and I give her this creative outlet.”

Kim concluded: “I take it as more of a creative thing – as long as it’s age-appropriate.”

TikTok/KimandNorthNorth washed her face, moisturized, and put on makeup in the video[/caption]

TikTokShe can use the app, but only with strict supervision[/caption]