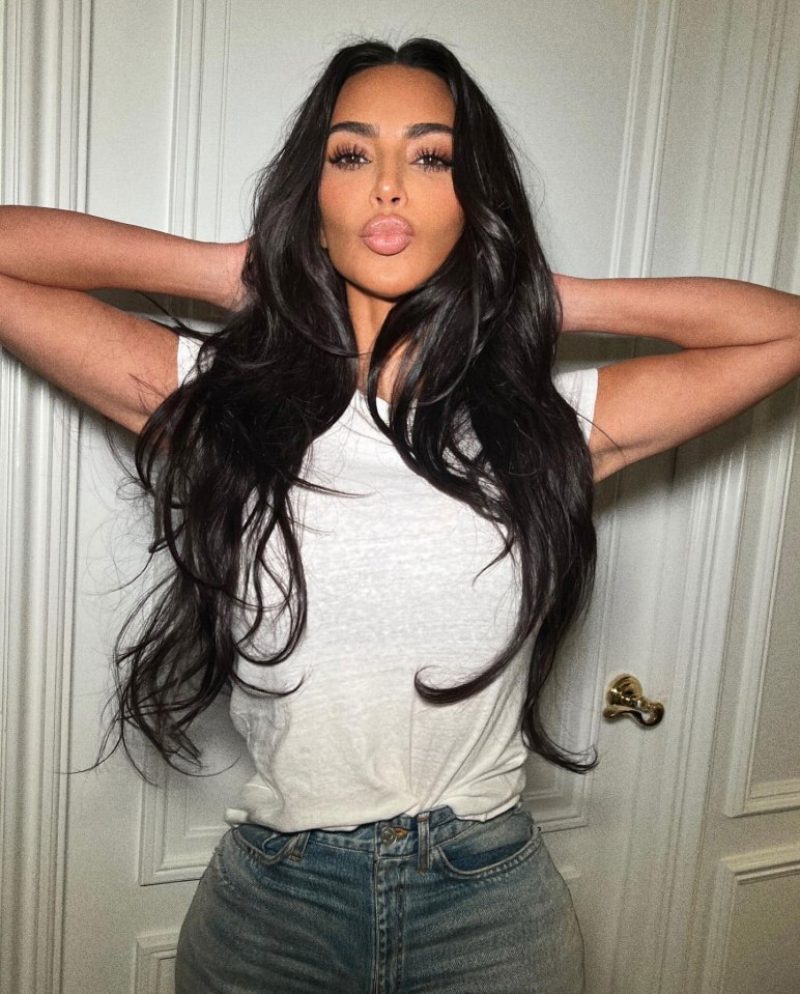 KIM Kardashian has written a cryptic new post on Instagram seemingly taking a jab at her ex Kanye West amid his reported new whirlwind wedding.

GettyKim posted her photo after reports that Kanye has remarried[/caption]

In the pics, Kim posed in front of a door sporting high-waisted ripped blue jeans and a white crop top.

She pouted her lips and ran her fingers through her newly darkened hair, looking jubilant and glowing.

Fans also raved over the gorgeous snapshot, with many commenting on how young the beauty mogul looked.

“Classic! Just like the old times,” one person wrote.

“Dark hair is the best! Makes you look younger!” a third echoed.

“Wow she looks amazing with a T-shirt and jeans, effortless and even looks younger,” a fourth agreed.

“Wow! Something about this reminds of the OG KimK,” one more added.

The photo comes after reports surfaced that Kanye may have tied the knot with Bianca, 27, two months after his divorce from Kim was finalized.

Sources told TMZ they have yet to make their marriage legal by filing a marriage certificate.

Despite that, Kanye has taken his reported wife Bianca to the same luxury Utah location where he brought his ex-wife.

Kim celebrated her 37th birthday at the Amangiri Resort in Utah, and Kanye whisked Bianca away to the same location for their reported honeymoon.

Kylie Jenner also stayed with her friends there last summer and Kourtney Kardashian and her ex-boyfriend Younes Bendjima celebrated his 25th birthday there in 2018.

Kanye was spotted at the resort with a child, but Kim’s representative has denied any of their four children were there with the reported newlyweds.

Bianca, who is from Melbourne, Australia, is a jewelry and architectural designer who has been working at Yeezy since November 2020.

She bares an uncanny resemblance to Kim but has recently chopped her long brunette locks into a short blonde bob.

The pair was spotted wearing what appear to be wedding bands while having lunch in Beverly Hills.

Kim and Kanye finally settled their divorce in November.

The Skkn mogul filed for divorce in February 2021 after nearly seven years of marriage.

Instagram / Kim KardashianKim has sole custody of their four children[/caption]