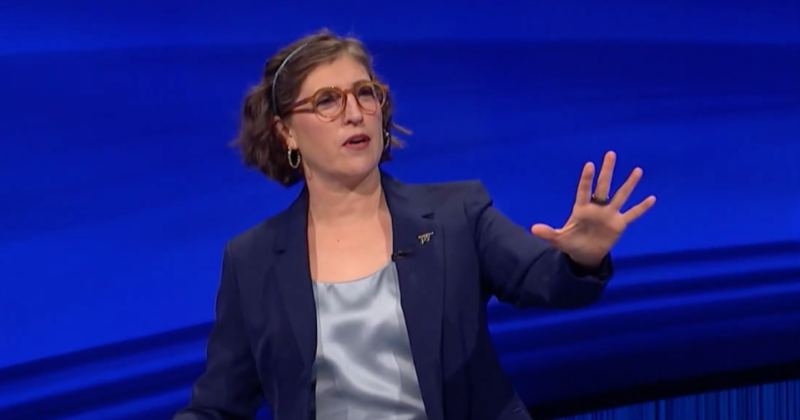 CELEBRITY Jeopardy! viewers got nothing out of bounds, but surely more side chatter than they bargained for on Thursday’s special.

Actor Brendan Hunt, who amused fans when he flashed his unique socks, won in a “blowout” after all three players got casual with host Mayim Bialik.

ABCOne fan tweeted: ‘I’m guessing we got a lot of time to kill tonight’[/caption]

Brendan, who stars on Ted Lasso, faced Cari Champion, a lead anchor on SportsCenter, and B.J. Novak, author, and actor from – where else but – The Office.

They played for an eventual $1M charity prize and are the last fresh A-list faces who will be seen until next year.

This was the last quarter-finals game – as waiting in the wings are two finalists.

The last finalist will either be Patton Oswalt who put up a towering $54,400 in his debut, Michael Cera, or Brendan who similarly couldn’t be lassoed in tonight.

‘GUESS WE HAVE TIME TO KILL’

The three contestants spent nearly five minutes chatting with Mayim during the second Q&A and it ran a bit long for fans liking.

Cari discussed her stunning resume, Brendan his late uncle in a hilarious way, and B.J. how he was once a clue on regular Jeopardy! that no one got, which was funny.

But the whole segment ran quite long as one angry fan Tweeted: “Worst show ever. Non-stop yapping… unbelievably bad.”

Another wrote: “Please wrap it up we got a game to play!”

Mayim also took a moment after spotting that Brendan had interesting Yellow Submarine-looking socks to see them again, which maybe wasn’t needed.

“Did we just stop the game to look at Brendan’s socks?” one fan tweeted.

“I’m guessing we got a lot of time to kill tonight. Got all the side segments tonight,” wrote another.

Final Jeopardy! – an admittedly interesting one – read: “Al Capone played banjo in a band called the Rock Islanders at this notorious spot.”

One fan accused: “Mayim is shockingly bad at the interview segment, considering she’s ostensibly there because she’s a celebrity herself. Also, I think she’s mispronounced Brendan Hunt’s name a couple of times.”

Another lamented: “It feels like there is always a runaway game in Celebrity Jeopardy.”

The special had only previously been hosted by the late Alex Trebek, who tragically passed away in 2020 from cancer.

The spinoff was so famous that it spawned the also famed Saturday Night Live parodies some fans are fearing the new version is becoming.

It’s been retooled to be an hour-long tournament with the new Triple Jeopardy! round.

Almost every episode has resulted in a huge backlash from purists and casual fans alike as it’s been deemed so unbelievably dumbed down.

Despite the easier materials, many of the contestants have made headlines for not taking their stint very seriously.

Comedian Eddie Huang was slammed for keeping his sunglasses on all show, and Constance Wu cursed in Final Jeopardy writing “tit” on the lectern.

Iliza Schlesinger was called out for hiding behind the lectern in another episode gone awry.

Then, Hasan Minhaj was deemed the “most annoying Jeopardy!” contestant ever for his on-stage antics which included yelling an answer without buzzing in.

He took to Fallon to “insincerely apologize”, irked fans claimed, as he called Jeopardy! fans “geriatric” for not enjoying him.

ABCIt was the second no-contest running as last week, Patton Oswalt won with a brutal $54K[/caption]

PrevPreviousTori Spelling gives ‘not great’ health update on daughter Stella, 14, after teen was hospitalized twice in just one week
NextKim Kardashian looks totally unrecognizable as she snuggles up to ‘life long’ pals in makeup-free new photoNext