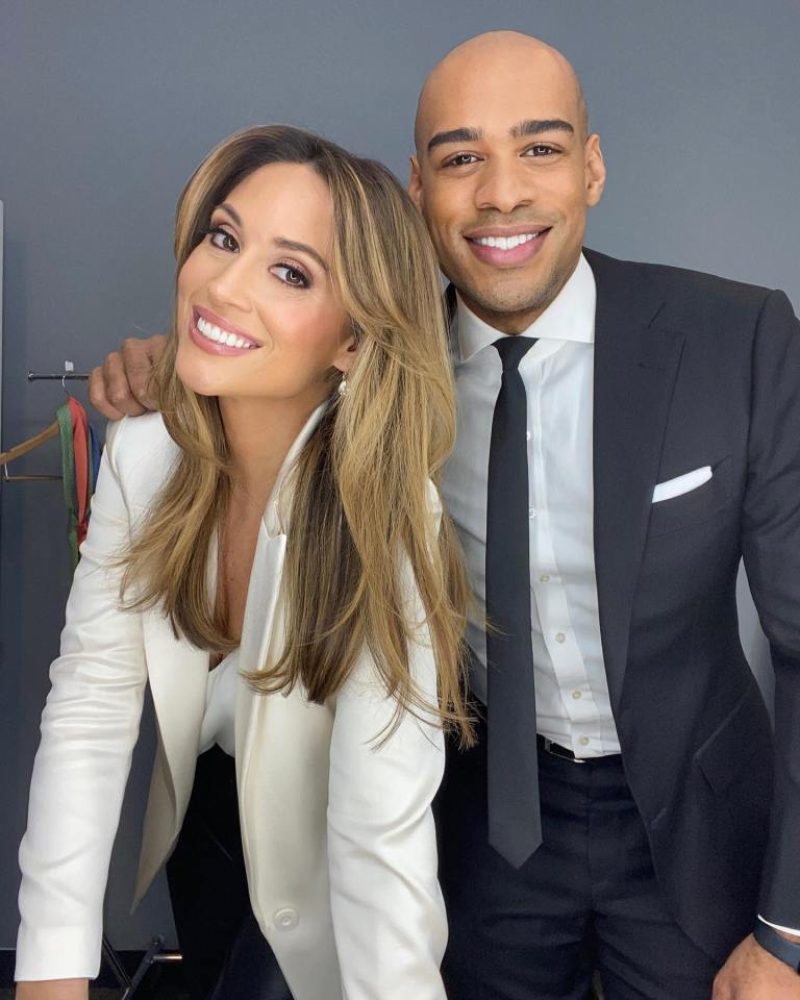 THE GMA hosts filling in for Amy Robach and TJ Holmes have shared a series of gushing posts about one another.

Holmes and Robach have been off the air for several weeks after explosive affair allegations emerged late last year.

The pair are covering for Amy Robach and TJ Holmes, who have been off the air for several weeksGetty

DeMarco Morgan and Rhiannon Ally have covered for the stars in their absence.

On Thursday, Rhiannon said she was feeling “thankful to be around people with such good souls.”

She shared a touching photo that showed herself posing alongside DeMarco and the radio star Rocsi Diaz.

The hosts were seen with their arms around each other.

DeMarco and Rocsi were among those who commented on the touching post.

He simply posted a bright red love heart, while Rocsi said: “Awesome hanging with you.”

Rhiannon also shared a selfie that she was taken with DeMarco earlier this week.

The pair have great chemistry on and off-screen as they both describe each other as their “friend.”

On Wednesday, DeMarco was seen giving his co-star a fist bump just before the show cut to a commercial break.

Earlier this week, the host offered fans a glimpse into his dressing room and said he was looking forward to the days ahead.

Fans heaped praise on DeMarco as they said he’s been a “great addition” to the team on GMA3 while covering for Holmes.

One huge fan said: “I love him as TJ’s replacement.”

While another viewer chimed in: Congratulations!! You are doing a GREAT job. We are so proud of you.”

It comes after sources told Page Six that DeMarco may get a permanent gig on the show.

The insider claimed that ABC “loves the job [Morgan’s] doing” and “everyone thinks he’s been really great.”

DeMarco was recently spotted attending a media mixer in Manhattan earlier this month.

Sources have claimed that people were “congratulating him and telling him nice job.”

Holmes and Robach remain off the air – around seven weeks after the allegations first came to light.

The pair were snapped during an intimate getaway to Miami over the holidays.

Sources close to the network have since told The U.S. Sun that Robach and Holmes will not be returning.

The presenter’s attorneys are reportedly working with ABC head honchos on an exit strategy.

An insider close to Holmes and Robach told The U.S. Sun: “They are unlikely to return to the network at all.”

Meanwhile, it has emerged that Cecilia Vega is leaving her job as a national correspondent on the morning show.

She’s heading to CBS to become a host on the news program 60 Minutes.

Instagram/Rhiannon AllyRhiannon shared a lovely photo of herself, DeMarco and the radio star Rocsi Diaz[/caption]

PrevPreviousLove Island’s Maura Higgins looks very different as she reveals her natural hair in stunning bikini photos on holiday
NextThe Real Friends of WeHo: Who is in the cast?Next