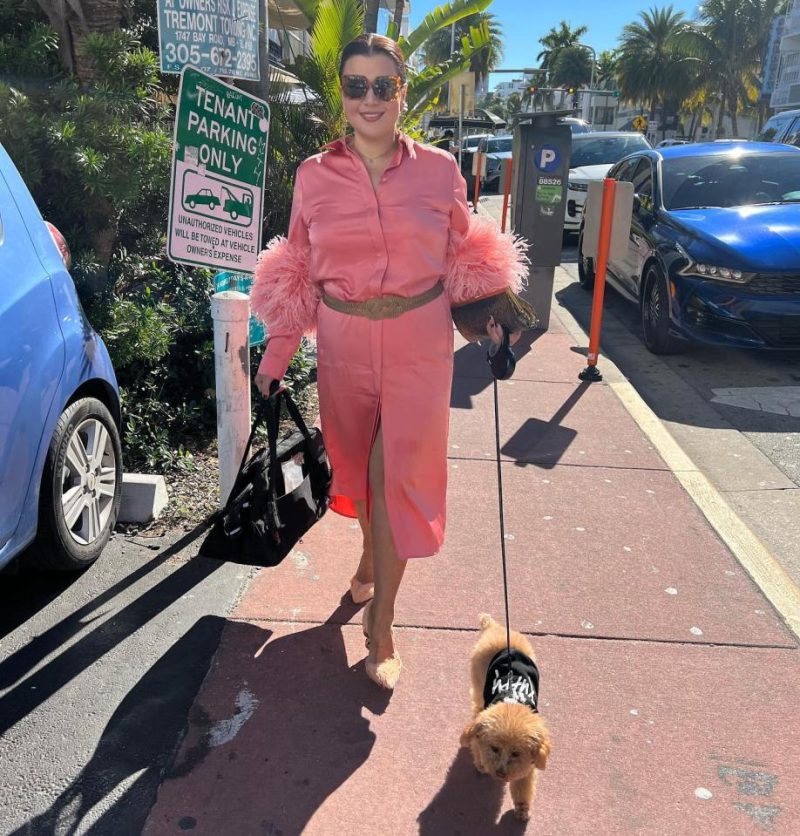 ANA Navarro has admitted to receiving a new form of Botox in her hometown of Miami.

The View co-host then flaunted her curves after celebrating her weight loss.

Ana, who lives in Miami and commuted to New York for her talk show duties, shared a photo to her Instagram that was straight out of South Beach.

The 51-year-old channeled her inner Elle Wood as she walked down the street in an all-pink silk button-down dress with a thigh-high slit.

The outfit was completed with puffed feathers on her arms.

But what she seemed to be proudest of were her shoes, which she featured in their own photo.

The high heels were completely covered in pink fur.

Ana smiled as she walked down the street walking her tiny dog and carrying a large purse.

She explained in the caption there was a reason for her special outfit.

“When I told (The View stylist Fran Taylor) I was going with @sarahaines to a drag brunch in Miami Beach this weekend, she said: ‘I have just the thing.’

Ana even joked: “No actual flamingoes were harmed in the making of this outfit.”

In the comments section, one fan comically asked: “Who’s the young chick with the cute puppy?”

Ana replied with the reveal: “Some b***h who had @carloswolfmd inject daxxify.

Daxxify is similar to Botox, but claims to be longer lasting.

The injectible was just approved by the FDA at the end of last year.

The outfit looked to be a hit, as Ana later shared photos of the drag brunch she attended with visiting co-host Sara Haines.

Fans captured Sara and Ana having the time of their lives and posted clips to Instagram.

One in particular, a fan named Karla, was in the area celebrating her bachelorette party at the drag brunch.

She shared a bevy of footage of Sara and Ana living it up together at the show.

Even Whoopi Goldberg made a guest appearance, via facetime, to talk with one of the performers.

Ana was likely still glowing after recently sharing that she lost some weight over Thanksgiving for the first time in her adult life.

But that was due to her contracting Covid.

Ana missed a week of work at the end of November while she battled the virus.

“So, yes. I had COVID over Thanksgiving. And I had COVID last week,” she said upon her return.

“I just want to tell you guys a few things. Number one: It’s back. It’s not gone.”

She then explained how she became sick.

“I got complacent. I wasn’t wearing my mask anywhere and I fly around a lot and so I just hope that we are all cognizant that it is still here.

“It is still something we have to deal with. And we should all be careful of it,” she finished.

PrevPreviousJinger Duggar reveals real reason why she hides daughters Felicity, 4, & Evangeline, 2, from spotlight in new interview
NextWheel of Fortune fans are all distracted by Vanna White’s ‘unusual’ dress that’s unlike anything she’s worn in 40 yearsNext