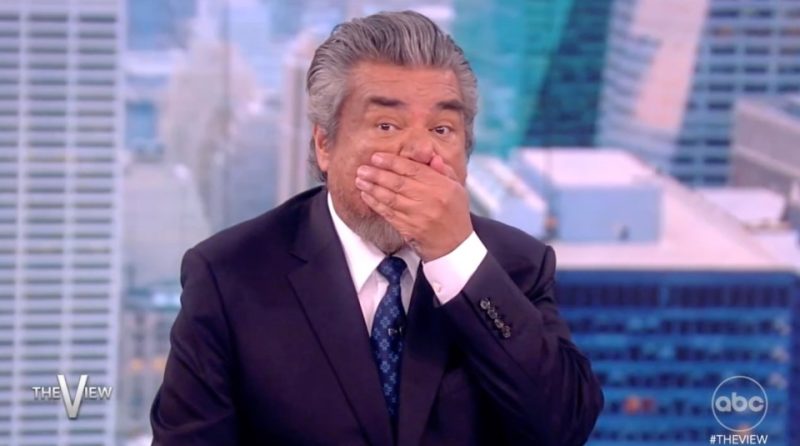 THE View producers have hit the bleep button on George Lopez after he nearly said the word “s**t” live on-air.

On Thursday’s show, George appeared on the show to talk about his new sitcom, Lopez vs. Lopez.

When he sat down, Joy Behar told him that the theme song from his original sitcom really follows him everywhere, as it played when he walked out.

They then moved on to a big pop culture topic.

“We will get to the new sitcom in a second, but first I want to hear your thoughts on Shakira,” she said.

“She’s on a vengeance tour with her music,” The View host let him know.

“I love that her hips don’t lie, but they can also tell when you lie,” George said, cracking up the panel.

“Listen, if you’re a Latino, a witch on a porch, is normal relationship stuff.”

He continued: “Somebody eating your preserves, that’s some big time-.”

And the show’s audio cut out, due to the comedian cursing.

But, an insider who attended the taping told The U.S. Sun that George said s**t.

After he cursed on live TV, he held his hand up to his mouth, and the co-hosts cracked up.

George first made viewers laugh from 2002 to 2007, with his first sitcom, The George Lopez Show.

The show starred George, who played a fictionalized version of himself, featuring his life at work and his family life in Los Angeles, California.

Now, 15 years later, the comedian is back on viewers’ screens in the show, Lopez Vs Lopez.

In it, he plays an estranged father to his daughter, Mayan.

They have to navigate dysfunction, reconnection, and all the headaches and joy in between as they make up for lost time like only they can.

And he is also there to offer parenting advice to Mayan about her son, Chase.

He also throws his jabs at her boyfriend, Quinten, and has to deal with his ex-wife, Rosie.

Although the show came right back on after George cursed, it was cut off for some time, due to another story.

The popular talk ABC show was interrupted for a special bulletin announcing that Alec Baldwin was charged with involuntary manslaughter for the Rust set shooting.

The Hot Topics segment got off to a feisty start as the women slammed New York Rep. George Santos.

But just minutes into the show, the debate was abruptly cut off by the ABC News Special Report.

Alec had been rehearsing a scene with a gun during the production of Rust in October 2021 when it went off with a live round.

But many of The View’s fans were not happy to see their favorite show disrupted by the breaking news.

“I tuned in for The View not Alex [sic] Baldwin. Dang! What’s with ABC? Get off our show,” wrote one on Twitter.

“ABC, this could have waited!” another agreed.

A Hot Topics fan complained: “Thanks to ABC News, we missed the best of The View!”

Another asked: “Why are they preempting things for celeb news?”

Others were furious to see that after the bulletin, the network showed commercials instead of going straight back to the show.

As a result, East Coast viewers missed out on the rest of the Hot Topics discussion about Rep. George Santos.

“How do we find out what we missed?” asked a disappointed fan.

Another pointed out: “Other talk shows have replays. Not The View. What an annoyance!”

ABCHe is currently starring on the show, Lopez Vs Lopez[/caption]