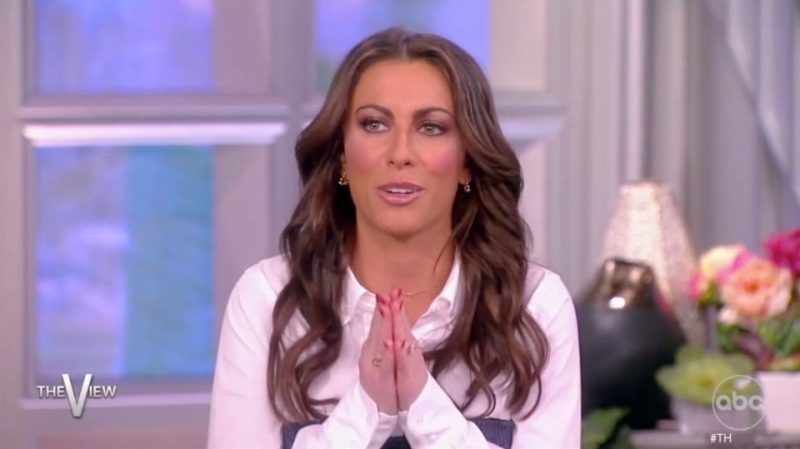 THE VIEW host Alyssa Farah Griffin has shocked fans after she opened up about a family member’s battle with addiction.

The morning show moderator made the revealing admission midway through Thursday’s broadcast of The View.

ABCAlyssa revealed that her sister, Alana, is celebrating 10 years ‘free from addiction’[/caption]

After prompting by her co-host, Alyssa, 33, made a “hard pivot” to recognize her sister Alana’s 10-year anniversary of being “free from addiction.”

The View’s panel and its audience erupted in applause to celebrate the political strategist’s sister’s achievement.

Alyssa continued, addressing those who are currently involved with a similar situation, “For any families that are dealing with this; you can get help [and] never give up.”

She added: “You’re going to fall back, you’re going to have trials but push through because I am so grateful and so proud to have her back.”

The segment was posted on the show’s Twitter account where viewers could show support for the 33-year-old’s sister.

Surprisingly the first comment came from Alana herself, who commented: “Aaww! Love you Sissy.”

While a fourth commenter stated: “Alyssa congrats on your sister’s 10th anniversary.”

Alyssa also took a moment to thank Whoopi Goldberg, 67, for a touching gift months after she officially joined the daytime show’s cast.

Alyssa first joined The View alongside Ana Navarro for Season 26 last September and has since grown into her role and is a big part of the team.

Moderator Whoopi took a bit of time to do so, but she presented Alyssa with a unique welcome gift.

Whoopi fashioned a small Lego figure of Alyssa, placing the tiny figure alongside a table with the rest of the hosts.

Alyssa shared a photo of a Lego version of herself the moderator had created just for her on her Instagram.

She captioned her photo: “Thank you @whoopigoldberg for giving me my very own Lego seat at @theviewabc table!”

The tiny version of the host was clad in a pink blouse and slacks and had a red cup in hand.

The host asked the comedian about her character in an upcoming role and Leslie did not take it seriously.

During a pre-recorded show, due to Martin Luther King Jr Day, The View hosts welcomed Leslie to the show.

The SNL alum started off her interview with jokes, which is typical for her.

She did turn serious, however, when she talked about Black women being the backbone of America.

Alyssa tried to keep the moment serious when she asked a question about one of Leslie’s roles.

“Your voice is so powerful,” the host said before adding, “and speaking of bada** women, you’re in a show called Our Flag Means Death.”

Alyssa continued: “Where you played a character called Spanish Jackie, who’s had 19 husbands.”

“One of them was taken from me,” the comedian said.

“Now, how did you prepare for this role?” the 33-year-old host asked.

“How did I prepare for this role?” Leslie questioned as she made a disgusted-looking face.

The moment was not serious anymore as Alyssa and the other co-hosts cracked up.

Leslie then pointed to Alyssa and cracked up at her question.

Leslie leaned over the table and laughed, but then turned back to Alyssa, and said: “Girl, I’m 55! You know how many pirates I’ve actually had?”

The comedian sipped her tea and raised her eyebrows, as the View hosts could not contain their laughter.

“I feel like that is your life you’re living on that show,” Whoopi chimed in.

“Girl, all of our lives,” Leslie said back.

Leslie’s earring then fell off and she said, “You know it’s serious when a Black girl loses an earring.”

One fan couldn’t believe the interaction between the women and tweeted: “Dang, Leslie cracked on AFG….. #TheView.”